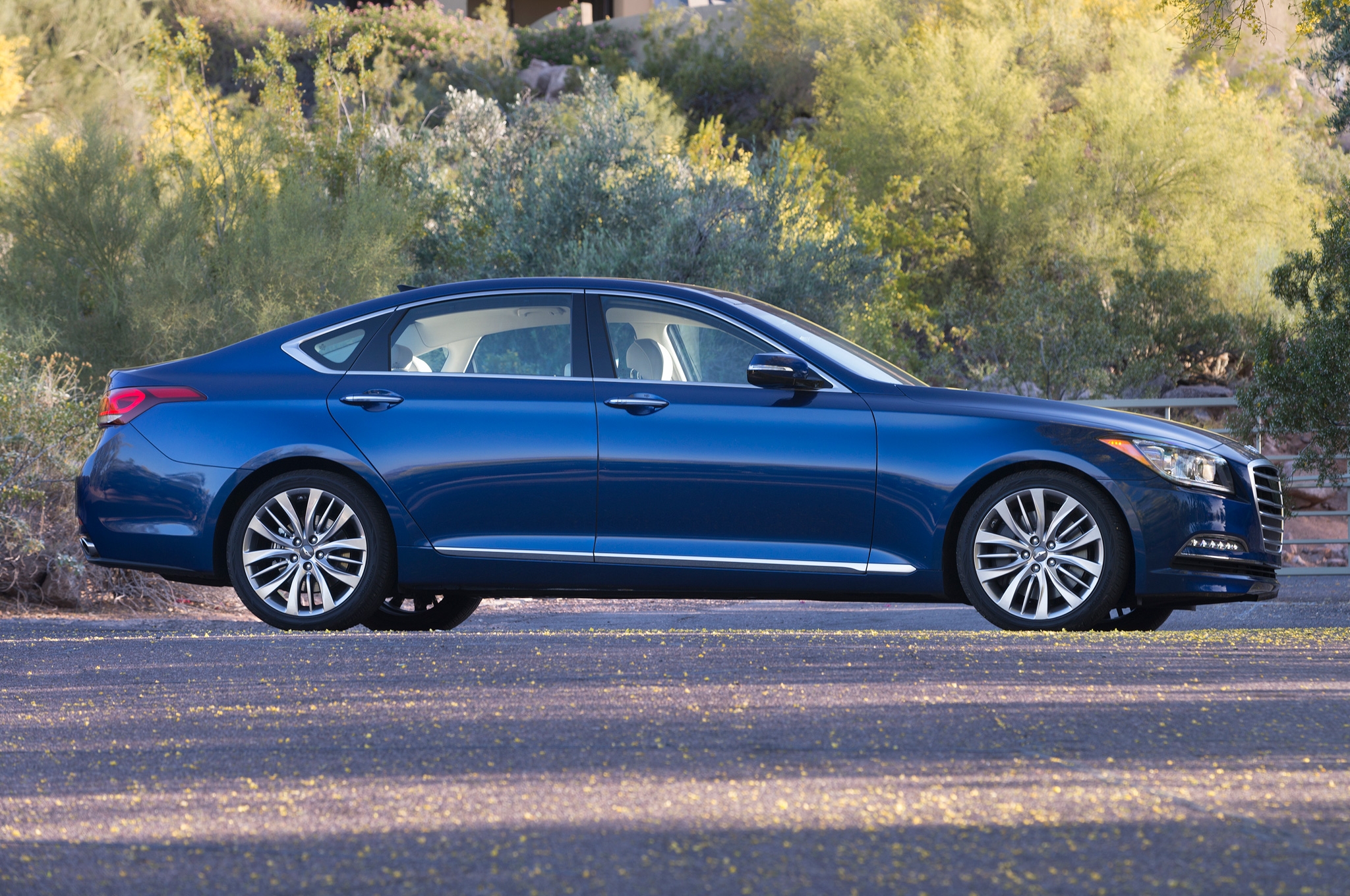 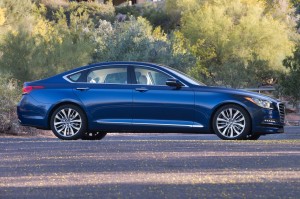 Well, they’re not branded – or priced – as such.

I speak – out of school – of the Chrysler 300 and the Hyundai Genesis, just updated for the new model year.

But you’d be a fool not to consider them as such – and to compare them with the “branded” stuff.

Both these rear-wheel-drive rollers start under $40k – several thousand dollars below the entry price point of pretty much every name-branded mid-sized luxury sedan currently on the market – yet ride, limo-like, on longer wheelbases than several full-size luxury sedans with base prices $15-$20k higher. They also come standard with strong V-6s – and can be equipped with even stronger V-8s – for about the same money the “luxury” branded cars want for puny fours and sickly sixxes. 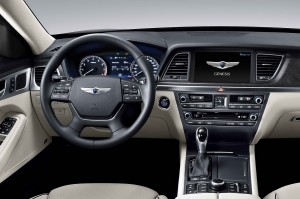 Several of the $45k-and-up competition will also charge you extra for amenities such as heated leather seats, satellite radio and a bunch of other stuff that comes standard in the Genesis (and the 300).

Either car is a a helluva deal – but Hyundai has just upped the ante with the new-for-2015 second generation Genesis. It is the 1989 Lexus LS400 all over again.

The very first Lexus. The car that gave Mercedes and BMW a wake up call . . .

Only this time, it’s Lexus that’s getting the wake-up call. 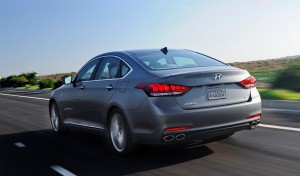 The Genesis is Hyundai’s second-largest sedan – not quite as big as the dreadnought Equus sedan – but noticeably bigger (and more opulently equipped as it sits) than a Caddy CTS, BMW 5 or Mercedes E – and only slightly smaller (outside) than a Lexus LS460, but very comparably equipped – and just as roomy inside – for a lot less money. . . .

Than all of them. 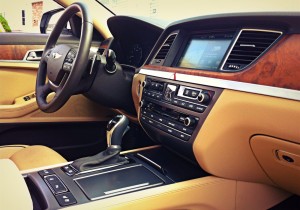 Chrysler’s 300 is the only other car of this genre that doesn’t come off as a rip-off in comparison. Its base price of $30,895 is even less than the base price of a new Genesis (a lot less) and even “with everything” – including the powerful Hemi V-8, all-wheel-drive and the ultra-lux John Varvatos package – it’s hard to spend more than about $50k on one. 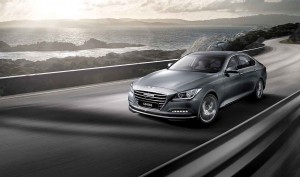 The ’15 Genesis gets a new body and interior and rides on a longer – and plusher – 118.5 inch wheelbase.

All-wheel-drive is also available for the first time – addressing one of the previous-generation Genesis’ few empty-handed issues relative to the other cars in this class (as well as the Chrysler 300).

Opulent – but not overwhelming – interior. 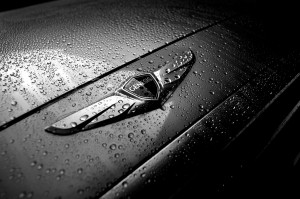 The Genesis comes standard with something that’s increasingly optional in this class – a big (3.8 liter) V-6 engine. 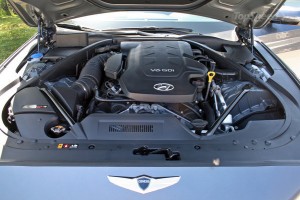 Mercedes includes a 3.5 liter V-6 (302 hp) as standard equipment in the E-Class sedan, but its base price is almost $14k higher – and you’re still not getting more displacement – or more hp – under the hood.

You can see where this is headed.

If 311 hp isn’t enough to crisp your bacon, move up to the Genesis V-8. Output climbs to an incredible 429 hp (and 383 ft.-lbs. of torque), which is untouchable for the money – and then some. Indeed, the V-8 Genesis only costs slightly more than the base-engined/four-cylinder 5-Series and Cadillac CTS sedans – and $400 less than a V-6 Benz E-Class. 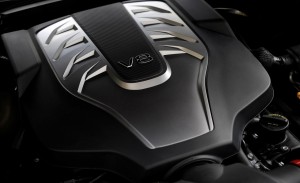 Performance with either Genesis engine is excellent. The V-6/RWD version is capable of doing the 0-60 run in 6.4 seconds; armed with the V-8, the time drops to just over 5 seconds flat.

Both Genesis engines are paired with eight-speed automatics and feature three driver-selectable modes: Eco, Normal and Sport – the latter firming up the shift points and dialing in sharper throttle response. 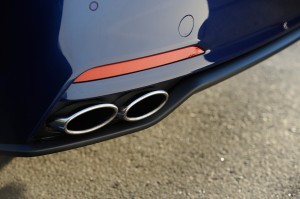 New this year is an optionally available all-wheel-drive system. The addition of AWD to the roster rectifies one of the few objective deficits of the Genesis relative to competitors models such as the BMW 5 and Benz E, as well as the Caddy CTS – and the Chrysler 300 – all of which have been available in both RWD and AWD versions.

Interestingly, Hyundai has chosen to debut AWD in the Genesis rather than the Equus, which remains RWD-only.

Also, buyers should note that AWD will (initially, at least) be offered only with the V-6 powered Gensis. 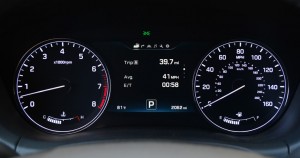 Given that regular unleaded costs about 20-30 cents less per gallon than premium, the Hyundai’s overall cost-to-drive is lower than the competition, too.

But the thousands you saved up front – relative to the competition – buys a lot of gas down the road. 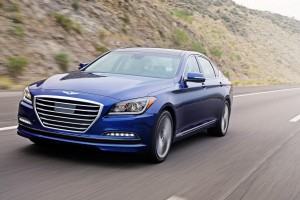 The Genesis is an exceptionally plush, smooth and quiet-riding car.

You know – the way big American sedans used to be.

Only now there’s just one American sedan (the 300) that behaves this way.

And the Koreans are closing fast.

If you’re over 40 today, you will remember when most cars were rear-wheel-drive rather than front-wheel-drive; when big V-8s were as common as small fours are today – and most of all, when ordinary people could afford to drive a big RWD car with a big V-8 engine under the hood.

Today, only the 300 and Genesis offer that experience  …  unless you’re prepared to spend a lot more than $50k. 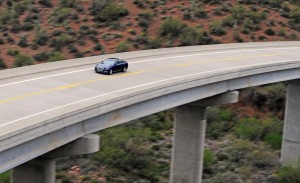 The big Hyundai loves the open road – and swallows the miles with S-Class aplomb, for C-Class money. Just to see what would happen, I took my Genesis test car for a drive up a truly vicious washed out gravel fire road out here in The Woods – where the reverbs are so severe they once literally caused a spot weld on the right rear shock absorber in my pick-up truck to shear off, leaving it dangling from its perch. But the barely-qualifies-as-fit-for-a-truck “road” did not perturb the Genesis.

That is, it didn’t perturb me, inside the Genesis.

I bet I could have sipped Chardonnay on the way up and not spilled any on the caramel-colored perforated leather seats. Those seats, by the way, are the best friends your backside will ever have. Wide and soft; giving where it matters, firm where they ought to be – and fine-tunable to your particular body. 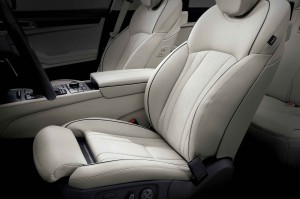 The price you pay for all this cush – if it matters to you – is a slower time through the autocross cones. The Genesis isn’t made to “corner” like a four-door sports car.

But – and this is worth harping on – as “sporty” as a BMW 5, et al, may track through a decreasing radius sweeper, their thrust deficit coming out of said sweeper – or more to the point, when trying to merge with traffic or get around a road Clover –  is arguably more of a real-world weakness than the Hyundai’s less-than-Corvette reflexes.

I think it’s preferable, actually, that Hyundai elected not to ape BMW, et al in the “sporty” department – but rather, offer an alternative to them. 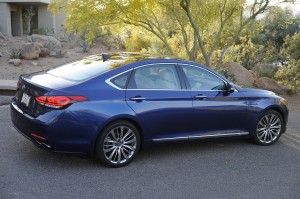 Its length (196.5 inches) and wheelbase (118.5 inches, an increase of about 3 inches over last year) puts it solidly in the full-size category.

Yet it’s priced in the mid-sized category. 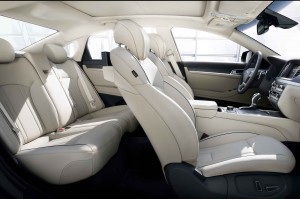 There isn’t another luxury sedan in this class that can touch the Hyundai’s size-for-the-dollar.

Well, there isn’t another luxury branded sedan in this class that can.

Which leaves the Chrysler 300.

It’s even larger – 198.6 inches end to end – and rides on the longest wheelbase of all, a stupendous 120.2 inches. Hence its 40.1 inches of second row legroom – untouchable by anything short of a Lexus L460 L (extended wheelbase) or a Mercedes S-Class.

And those, of course, are six-figure cars. 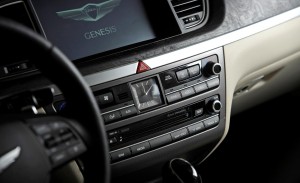 Another thing the 300 and Genesis have in common: They’re both nicer (that is, better equipped, with more features and amenities) in as-they-sit base trim than the ostensible “luxury” brand cars they ought to be stacked up against.

The Genesis, for instance, comes with real leather seats (heated leather seats) eighteen-inch wheels (17s are standard with the E-Class and BMW 5, neither of which come standard with either leather seats or seat heaters; they’re extra cost) a seven speaker audio system with satellite radio included (extra, again, in the aforesaid “luxury” cars) and long list of additional features, all inclusive.

The Chrysler 300 is comparably well-padded, with 19-inch wheels standard, as well as leather and seat heaters and satellite radio, too. 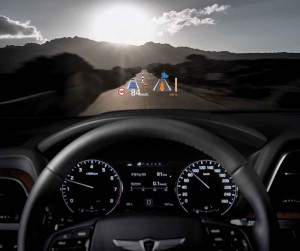 With either car, you can go Vegas with the options – buy everything their respective manufacturers offer – in the case of the Genesis, this would include the V-8, the Signature package with panorama sunroof, HID headlights, ventilated seats, power rear and manual side shades and a 14 speaker premium Lexicon surround sound audio system – and the Tech package (adaptive cruise control, lane keep assist, emergency/automatic braking, even nicer leather and an even nicer gauge cluster  – and still be hard pressed to leave more than about $60k at the Hyundai store. 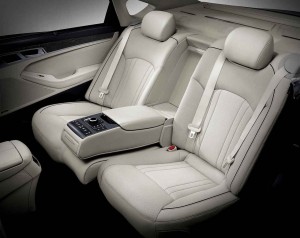 So, what’s the difference?

Why buy the Genesis rather than the 300?

Well, the Genesis is newer, of course. But it’s also subtler. And softer. Everything about it betokens gentleness, calmness, unobtrusiveness. It is not a showy or flashy car. Much less an aggressive or obstreperous one.

Not that there is anything wrong with either approach. They’re just different.

And it’s nice to have the choice. 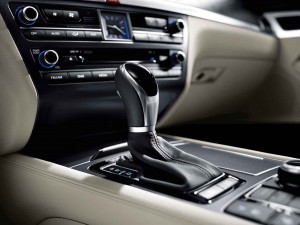 The Genesis offers a few unusual features, among them a push-button “park” feature that lets you take your foot off the gas – as at a red light – without having to move the gearshift lever to “park.” And speaking of gear shifters . . . the Genesis has a conventional (and center console mounted) lever, rather than a toggle or some other needlessly elaborate electronic interface. Of a piece, the rotary knob selector for the various secondary systems (audio/GPS, etc.) There is a lot of stuff to operate – but none of it is challenging to operate. Hyundai has followed the dictum  of the great stoic philosopher Marcus Aurelius: Simplify.

This makes the Genesis an absolute pleasure to be in, whether as driver or passenger. 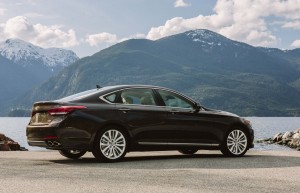 Hyundai has made more inroads in every segment – economy cars, family crossovers and now luxury cars (in all but name) than Guderian’s tanks made in European Russia during the summer of ’41.

But it’s more than just that; more than merely dollars and cents.

Simply put, the Genesis is a great car – price notwithstanding. It reminds me a lot of the original Lexus LS, which delivered a ball peen hammer wake-up call to Mercedes and BMW.