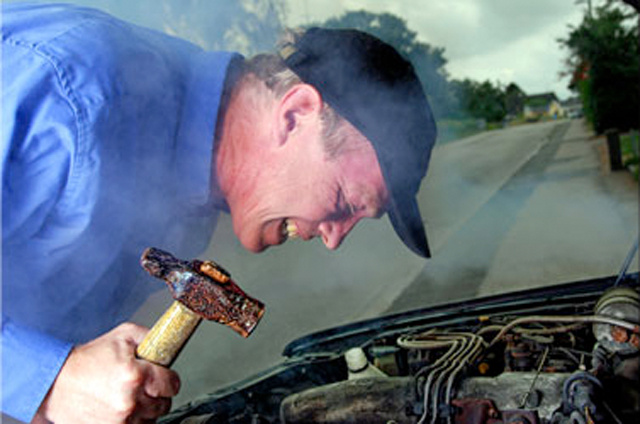 Fixing cars can be fun – or at least, satisfying (and money saving). Breaking your car – or yourself – is not fun.

Here’s how to avoid doing that: 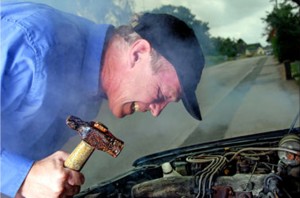 A great mistake made by many is to guess that “x” is the problem when in fact it’s “y” (and maybe “z,” too). Then they begin to pull stuff apart – and throw stuff away – hoping that the new part they just bought and installed will fix the trouble.

Now you’ve got the same problem – and less money in your pocket.

Here’s a for-instance: A friend of mine complained about his older pick-up sputtering and missing. He was going to jump the gun and start buying tune-up parts before he’d even checked to see whether any of the spark plugs were fouled, plug wires were bad – and so on. I suggested he slow down and eliminate all the potential problems before he began “fixing” stuff.

Turned out he had some water in his carbureted truck’s fuel lines/gas tank.

A $2 bottle of isopropyl alcohol (gas dryer) did the trick.

Lesson? Do not guess, young Jedi. Know. Diagnose the trouble before you start pulling parts – and buying new parts. Troubleshooting is a step-by-step, logical process of elimination. Once you’ve eliminated the various possibilities, you’ll be left with what must be the source of your trouble.

And now you can start pulling parts.

* Understand procedures before you proceed –

Even an oil change – perhaps the simplest DIY job there is – requires understanding how to properly raise and support a car; knowing how to go about accessing (and removing) the old filter, loosening/removing/re-installing the drain plug … and numerous “little things,” too. Like removing the fill cap on top of the engine to facilitate quick draining; knowing not to change the oil when the engine is too hot… or too cold. To put some oil in the new filter before installing it. To check for pressure (and leaks!) as soon as you start the engine… and so on.

This is where a good factory shop manual for your vehicle can come in really handy. It will have detailed, step-by-step procedures – usually, with high quality pictures and diagrams accompanying the text. The less expensive generic manuals (e.g., Haynes and Chiltons) are ok, but usually lack the specificity and depth of factory manuals.

Tip:  You may be able to find the manual for your vehicle online (and much cheaper) in PDF form, or in CD-ROM form (also a lot less expensive than a hard copy manual).

Second tip: You can often find videos posted on YouTube and elsewhere literally showing you how it’s done. This can be extremely helpful. Just be aware that – like mechanics in the real world – cyberspace mechanics can get it wrong, too. But the visual – being able to observe someone else work on a car (or bike) like yours – will at minimum give you a better idea how it comes apart (and goes back together again) before you actually begin to take it apart.

* An uncluttered, dry and well-lit workspace – 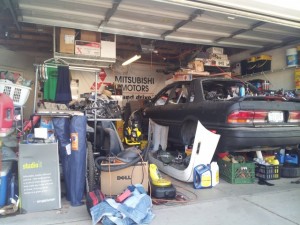 It’s easy to get frustrated – and rush (and mess up) when you’re lying on your back in the mud, it’s 27 degrees outside and the sun’s fading fast.

It’s also easy to lose track of tools – and get dirt  where it’s not wanted.

The ideal set up is, of course, a nice warm garage with plenty of artificial light and benches and drawers and pegboard for organizing all your tools. Of course, not everyone has that luxury. But even if you don’t, you can still make things much more pleasant – and so, much less likely to end in disaster – by preparing your work area before you actually begin to work on the vehicle.

If the car will need to be raised in order to get underneath it, a level (and firm) patch of ground is imperative. Hard-packed gravel is ok; a paved driveway much better. Try to make sure there is plenty of space around the car itself, so you’ve got room to work. And so there’s less chance of something – or someone – bumping into you while you work. Or – much worse – the car. 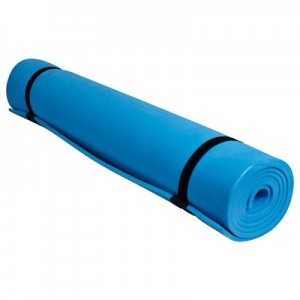 Avoid working on a car parked on the street, with traffic and other people in the vicinity.

Use a floorjack to raise the car (be sure to know where to put the jack – a frame/structural hard point – before you begin to jack; do not guess) and then support it with jack stands. Never get underneath a car supported only by a floor or bottle jack. They can fail. Be certain the up-in-the-air vehicle is not tipsy. Be sure the parking brake is engaged and the transmission in Park if it’s an automatic and one of the gears (not neutral) if it’s a manual.

Buy yourself a foam Yoga mat to lie on underneath. They are cheap ($15 or so at Target or Wal Mart) and light, can be rolled up, are easy to store and clean – and will let you concentrate on your wrenching rather than the wrenching pain in your back. Organize your tools before you begin. Lay them out on a towel, so you can keep track of them. Use small plastic storage tubs (buy ’em cheap at the supermarket) to toss loose nuts and bolts into as you go. You’ll be much less likely to lose stuff this way.

* The right tool can make all the difference  –

If you work on cars long enough, you’ll come to understand. Here’s an example: I recently had to remove a gas tank from a vehicle. On one end, it was held in place by large nuts that could only be accessed from above. The problem was clearance. I could get a socket – or a box wrench – on the nuts, but due to the proximity of the frame, there was very little room up or down (or side to side) to allow me to apply the force necessary to loosen and remove these bolts. Luckily, I have a selection of oddly angled ratchets. The handles are bent in various ways, which comes in very handy when a straight handle doesn’t quite work in a tight space. “Wobble” extender bars are another hugely helpful item to have in your tool box. They give you just that little bit of lateral clearance you’ve gotta have sometimes. 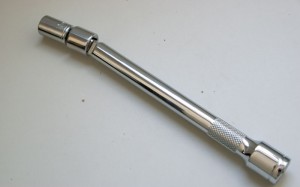 Special-use tools such as this are typically acquired over the years, their acquisition often prompted by exasperation. The thing to know is this: There is almost always a tool for a job; a way to get at whatever you’re working on (and get it back on again). Don’t get mad – and don’t give up. If you get stymied, take a break and a take trip down to Sears or Northern Tools or Harbor Freight or any store that has a big selection of automotive (and other) tools.

You’ll be amazed – and glad you did.

Anger truly is of the Dark Side. It will (usually) get you someplace worse than nowhere. As in making a problem worse rather than better. Take a breath. Relax. Believe me – there is a way. The car can be fixed. And will be. Maybe not this afternoon; maybe not even this week. But – given time to ponder and time to piddle with it, eventually, there will be a eureka! moment. 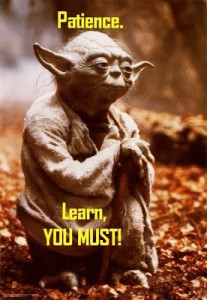 The critical thing here is not put yourself on the clock. To not begin a job knowing you must have the car put back together by nightfall. This is the killer. Because it often leads to rushing, to doing things half-assed.

It may be inconvenient to bum a ride or borrow (or even rent) a car while yours is out of commission. But it beats breaking something that ends up costing you more in money and hassle than the original issue would have if you’d just taken whatever time it took to fix it right.