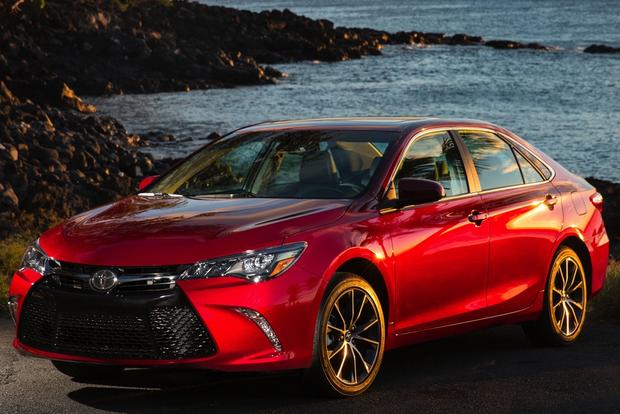 Don’t worry – they didn’t mess it up. 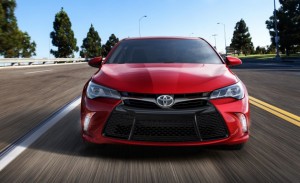 The “bold” and “sporty” 2015 Camry is – wisely – more or less the same as it was before. Yes, it has a new face. And there is a new (and “sportier” optional gauge cluster). But it’s no Altima/Maxima/Mazda6/Accord … thank god.

Toyota isn’t stupid, after all.

And it would be exceptionally stupid to take the best-selling family sedan on the market and me-too it into another “sporty” sedan, thereby giving buyers little reason to buy it over the others except that it’s still a blue chip Toyota.

Thus, the minor facelift inside and out. A little Botox here and there to tighten up the sags. But underneath, the hard-won wisdom of experience remains. 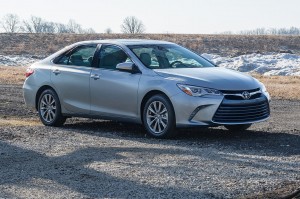 The Camry is not just another mid-sized, family-friendly sedan in the $20-$30k-ish range. It is the best-selling such sedan on the market – and has been for years. Yin to the Honda Accord’s (and Nissan Altima/Maxima, Mazda6 and other such cars’) sport-sedan Yang.

Historically less aggressive, both visually and operationally – and esteemed for precisely these qualities by a demographic that just wants a large, roomy, comfortable and quiet car that also has a top-drawer rep for reliability, durability and high resale value. 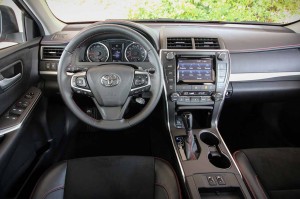 A new skin, revised dashboard design and some tightening up of the car’s handling feel comprise the major changes for 2015.

Both the standard and optional drivetrains carry over essentially unchanged and – critically – the Camry’s generous interior dimensions also carry over, most especially its exceptionally roomy back seat.

Still a Camry … rather than a Camry trying to be an Altima (or even an Accord).

Still available with a big V-6 (you may have noticed this type of engine is quietly fading away in favor of turbo fours, which are more fuel-efficient but also more complicated and potentially down-the-road expensive).

Nothing objectionable about it.

While it’s silly to speak of cars (which are disposable appliances) as “investments,” this one is without question among the best values out there.

Vanilla is not everyone’s favorite flavor.

Chrysler 200 (a very Camry-esque sedan in terms of it plushness and quiet) is available with all-wheel-drive. 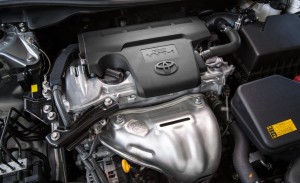 As previously, the Camry is available with an economy-minded four cylinder engine and a more powerful V-6. Both are paired with a six-speed automatic driving the front wheels.

The four – displacing 2.5 liters and producing 178 hp – is at a bit of a disadvantage both output wise and mileage-wise relative to some of the newer-engined competition. The Chrysler 200, for instance, comes standard with a 184 hp 2.4 liter teamed up with a nine-speed automatic. This combo rates 23 city, 36 highway – slightly better than the four-cylinder/six-speed Camry’s 25 city, 35 highway. The new 200 is also available with a 295 hp 3.6 liter V-6, whereas the Camry maxxes out at 268 hp with its optional (and carryover) 3.5 liter V-6.

You can also get all-wheel-drive in the new 200, a feature that’s fairly rare in the class (and unavailable in the Camry).

But, both Camry engines are still close enough to the class leaders, in terms of power (and mileage) to not be liabilities. Indeed, the V-6 Camry – though on paper not as powerful as some of the others in this class – nonetheless posts among the quickest 0-60 times (about 6.1-6.2 seconds). This can be credited to its lower curb weight relative to its rivals. At just 3,300 pounds, the Camry is fairly light for a mid-sized sedan. 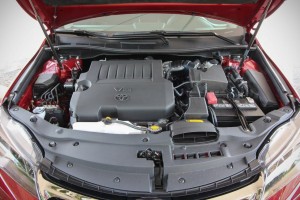 A word also on the complexity issue. A six-speed transmission may not seem as ultra-modern as the nine-speed box in the 200 but it’s proven technology (read: reliable) and the truth is the additional gearing (as in the 200) is chiefly there to eke out fractional gains in mileage unnoticeable to the owner but noticeable in terms of the automaker’s “fleet average” fuel economy totals. On the other hand, the more-than-six-gear transmissions sometimes can’t quite decide which of the many gears to be in at any given moment – and that may be more noticeable to you, the owner, than plus or minus 1-2 MPG either way. 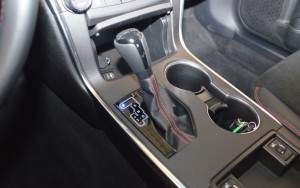 Similarly, the Camry’s V-6 makes power without power adders such as turbochargers – which are becoming as trendy as glam rock back in ’77 but which could also prove to be as short-lived a trend – if the turbos prove to be long-haul unreliable  (as they have, in the past). Maybe the engineers have figured out how to build 150,000-mile plus turbocharged fours. But, maybe not.

Are you willing to take the risk?

Both Camry’s engines are set up to run best on regular (87 octane) unleaded. 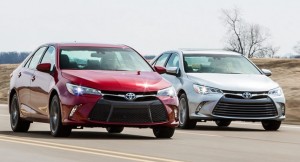 What they’ve done is tighten up the steering (electric-assisted) and reduce body roll when cornering at speed – while keeping the ride serene. The previous Camry’s old-school Buick Roadmaster comfort (and quiet) has not been mucked up, but you no longer need to slow to 5 MPH below the posted limit in the curves to keep the tires from squealing – and worrying that the car’s going to fling hubcaps into the woods.

This is no common thing. All the cars in this class – all modern cars, generally – “handle” well. Meaning there is no functional necessity to slow for most curves. One can usually maintain speed (assuming a non-nitwit driver) without  the car conveying the impression of imminent loss of control – much less the actuality. Accord, Fusion, Altima or Maxima – they sail through them with one finger on the wheel and you hardly paying attention.

But to be able do this, most also have pretty stiffly sprung suspensions – and so, a pretty stiff ride, comparatively speaking. If you are old enough to remember how family-type cars used to ride, anyhow. Family-type cars were once soft. But the downside was, they wallowed. Camry used to, too. But not anymore.

It’s still not a sport sedan – thank the gods. 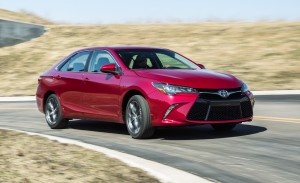 But it can handle itself now, if the urge arises.

Also: You can do a burnout if you like. No mention of this is made in the press kit materials or the owner’s manual, but Toyota has reprogrammed the traction/stability control to be a bit less helicopter mom. You do still have to come to a complete stop to disable the buzzkill electronics (there’s a button on the dashed to the left of the steering wheel) but unlike previous Camrys – unlike every previous Toyota I have driven – it actually stays off. It does not (as in previous Camrys) come back on once the car reaches say 35 MPH. This means not just burnouts are enabled. It also means you’ll be able to power up a slick driveway without the well-intended e-nanny fighting you all the way.

It is a small thing – but a very big thing, if you have to deal with snow every year. 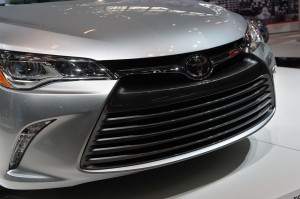 The way you tell one new car from another these days is – for the most part – by looking at the front clip. From the sides, it is damned hard to tell one from another. This Sameness Effect is a function of the need for all car companies to fit their designs within the template of crash standards in tandem with the general urge to make every car (well, every sedan) look like a BMW 3 Series.

From the front, though, this Toyota is trying to look like a Lexus. The centerpiece of that effort being the huge new cowsweeper-style grille (Lexus calls it “spindle”) with GS 350 F-Sport-echoing vertical slat turn signals cut into the fascia on either side. Up above, a set of angry looking LED slit-eyes for headlights.

There have also been some changes to the side sheetmetal – including what Toyota calls “bold” new character lines – as well as a revised rump with “maximized” tail-light appearance – but these tweaks are less obvious and (wisely) don’t screw with the Camry’s fairly conservative overall shape, especially as regards the forward sweep of the windshield (not too much) and backward taper of the rear glass (ditto). This leaves the previous-gen. Camry’s generous glass area (and excellent all-around visibility) intact. Also headroom in both rows, which stays the same at 38.1 inches (a solid inch more than in the “sportier ” – you bet it is – Nissan Altima sedan). 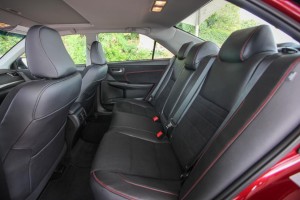 Where the ’15 differs from the ’14, specs-wise, is overall length – 190.9 inches vs. 189.2 previously. It’s interesting that this lengthening does not change any interior (or trunk capacity) specs and seems to have been done chiefly to give the car more visual presence. Which it does. Or rather, has.

But looks are secondary when it comes to taking the measure of Camry. The styling tweaks are nice, certainly. But what sells this car is its equally accommodating first and second rows (especially that second row), the way the A and B pillars do not occlude your view when attempting to negotiate busy intersections or pull out from a side road into traffic; the not-overly-fastback rear glass – which does not distort the view behind you – and so on.

A back-up camera is standard, but this car doesn’t need it. 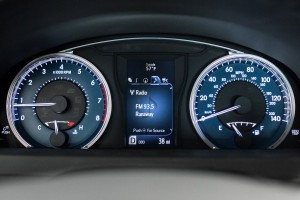 Inside, there’s a new-look dashpad (also Lexus-ish) and your choice of two different gauge clusters. There is the standard display – and a “sportier” Multi-Information display, which expands the sizes of the tachometer and speedometer and places other readouts in between them in a smaller LCD rectangle that can be scrolled through at will via controls on the steering wheel.

“Sportier” it may be, but the don’t take the advertising hype too seriously. This is still an exceptionally pleasant car to drive around – whether the trip is short or long. None of this is apparent immediately. The Camry’s goodness is subtle. Which is precisely its genius – and the reason for the fierce (and seemingly, perpetual) loyalty this car inspires. Other cars try to get your attention with highly styled interiors or various electronics (often, gimmicky).The Camry wins your heart by just being incredibly competent at everything you’d expect it to be good at – and aggravating in no way whatsoever.

The fact that it is not necessary to ponder how to change the radio station or set the temperature shows just how much thought went into designing these control interfaces. Large knobs, big buttons – everything simple and direct. If you want  finger-swipe “haptic” or microwave oven-style plastic keypad controls – well, this car’s not for you.

Bonus points : The new Camry has seat heaters that heat. Someone has been reading my rants about Japanese seat heaters – about how they generally suck. These don’t. They’re not quite as toasty as, say what you’ll find in a VW or a Mercedes or a BMW (Germans know seat heaters). But the Japanese are learning.

Well, these Japanese are learning.

In the same vein: They’ve relocated the iPod USB port to a place where you can see it and get to it – up ahead of the shifter, in the little cubby at the bottom of the center stack. In several previous Toyotas, the USB port was buried out of sight – and reach – in the recesses of the center console storage area behind the gear shifter, where it was almost impossible to access without stopping the car, unbuckling your seat belt and twisting your body around. 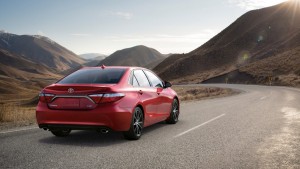 Most of all – and please cheer with me – the newly available pre-collision system (like the less pre-emptive traction control) does not come on when there’s no good reason for it to do so (as, for example, when there’s a car 50 yards ahead of you that’s in the process of turning off the road and so you know there’s no need to jam on the brakes because he’ll be gone long before you get to where he is now). The system is so background, in fact, you won’t notice it’s there unless you do almost hit something and it prevents that from happening.

Which is just the ticket, right?

Despite the wow-wow commercials, rest assured Toyota has done the smart thing – and not fixed what isn’t broken.