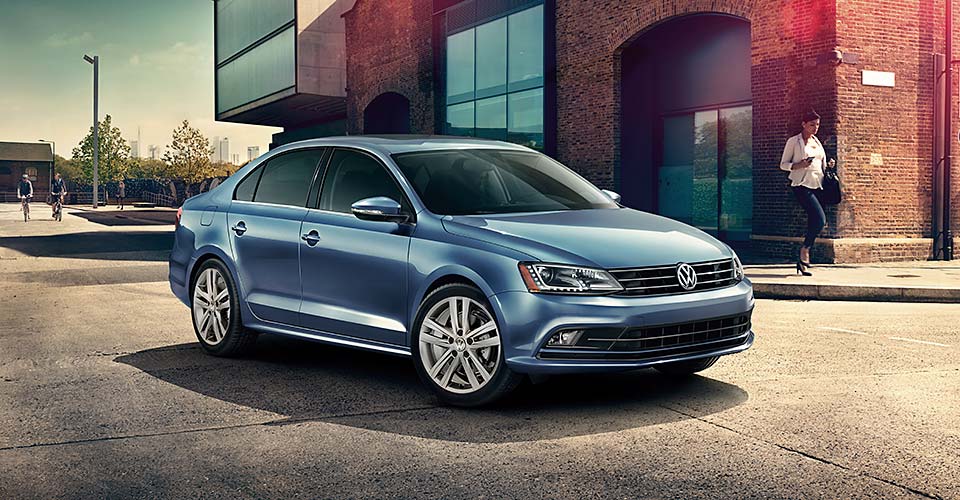 VW’s Jetta sedan hasn’t got a lot of sex appeal. 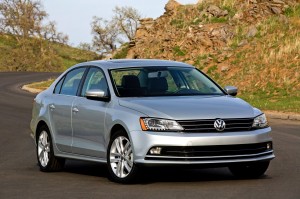 Nothing about it seems automotive centerfold worthy. And yet, it’s a perennial favorite – one of the most successful (in terms of sales and model longevity) cars in its class.

If this seems contradictory, it’s not.

Think about people you dated in high school and college – and right after college – and compare them with the person you eventually took home to meet your parents.

Looks dazzle; chemistry matters. But a successful long-haul partnership requires something more. The stuff that keeps you interested when the initial passion wanes, as it inevitably will. 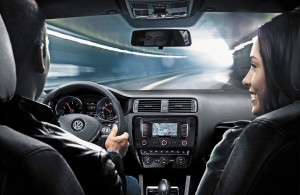 The Jetta has these qualities; they’re just not immediately obvious.

The Jetta is VW’s compact sedan – a bit larger(and more family-minded) than the Golf – not as large (or pricey) as the Passat.

It is the only German car in its class – which includes Japanese rivals such as the Mazda3, Honda Civic and Toyota Corolla and domestic small/value-priced sedans/hatchback wagons like the Ford Focus.

But the fact that it’s German isn’t the Jetta’s only uniqueness. It is also the only car in its class/price range that offers diesel and hybrid power (the latter new for 2015) as well as two gas-engine options and three possible transmission choices (four, actually, if you count the hybrid). 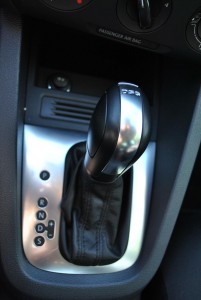 The TDI diesel Jetta – by far the most affordable diesel-powered car you can buy (other than a Golf TDI) starts at $21,460. This version of the Jetta can be ordered with either a six-speed manual transmission or a six-speed automated manual (DSG) that is a different box than the six-speed automatic that’s paired (optionally) with the 2.0 gas engine.

The most expensive Jetta is the hybrid version – which uses a tandem 1.4 liter gas engine and 20kW electric motor/battery pack working through a seven-speed automated manual (DSG).

In addition to some subtle styling tweaks (front and rear clip; gauge cluster) the Jetta receives a number of functional upgrades for the new model year, including 10 more hp for the TDI diesel (150 now vs. 140 in ’14) and updated audio/GPS/infotainment systems. 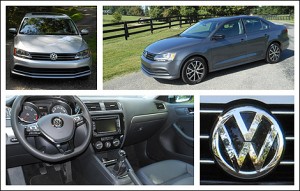 Stress-relieving simplicity of layout and controls.

Just the one sedan-only bodystyle now  (Ford Focus and Mazda3 are still available in sedan and hatchback wagon versions).

Base Jetta has weaker-than-others engine that doesn’t give you better gas mileage than competitors’ stronger, better-performing base engines. 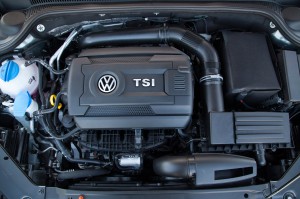 Base Jettas come with a 2.0 liter four cylinder, not turbocharged, paired with a five-speed manual transmission. It is one of the mildest engines in the class, producing only 115 hp (the base 2.0 engine in the Ford Focus produces 160 hp; the Mazda3’s base 2.0 engine makes 155 hp).

This mildness – of output and performance – would be no problem if the VW’s base 2.0 engine delivered better gas mileage than its higher-powered/better-performing base-engined rivals.

The EPA sticker says 25 city, 34 highway with the five-speed manual and 23 city, 34 highway with the available six-speed automatic. This is not bad – it’s just not better than its rivals. The base-engined Focus, for example, delivers 27 city and 40 on the highway (automatic versions; with the manual, the figures are 26 city, 36 highway). The Mazda3 does even better: 30 city, 41 highway (with the optional automatic; manual versions do almost as well, 29 city, 41 highway). 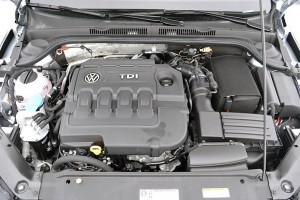 Ironically, the Jetta’s optional 1.8 liter (turbocharged) engine gets better gas mileage than the base 2.0 engine, too: 25 city, 37 highway with either available transmission.

While not quite as fuel-sippy as the Focus/Mazda3’s base engines, the VW’s optional engine does outpower them. Its 170 hp is stronger than anything you can get in the Focus (excepting the high-performance ST, which is an apples-oranges comparison) and competitive with the Mazda3’s optional 2.5 liter, 184 hp engine.

Equipped with the 1.8 liter engine, the Jetta is capable of getting to 60 in the 7.3-7.4 second range, nearly 1 full second quicker than the Focus and right there with the 2.5 liter-equipped Mazda3. 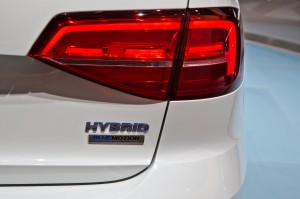 VW continues to offer a diesel engine – which easily achieves “best in class” fuel economy stats: 31 city, 46 highway. However, this is only about 5 MPG better than the mileage delivered by the gas-engined competition, which cost several thousand dollars less to buy than the TDI Jetta.

The same problem besets the hybrid Jetta. Its mileage is exceptional: 42 city, 48 highway (and its performance quite credible; 0-60 in less than 8 seconds). But its base price of $31,670 is easily $10,000-plus more than 40-MPG (highway) capable gas-engined rivals and $12k or so (the cost differential up front) buys a lot of gas. It’s hard to make an economic case for the hybrid Jetta unless you do a lot of stop and go city driving – where the Jetta hybrid’s most economical to operate – or the cost of gas climbs back up to $4 a gallon … which it very well might. 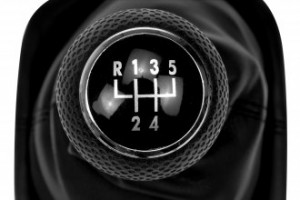 It’s surprising to climb behind the wheel of a new Jetta and find a five-speed manual transmission. These are becoming almost as rare as four-barrel carburetors.

All the Jetta’s rivals come standard with six-speeds.

But is the five-speed a liability – or a plus?

On the plus side, there’s less work to do. It’s nice not to have to shift as often (going both ways) and the 1.8 liter engine’s torque output (184 ft.-lbs.) makes it unnecessary to do so.

The Jetta has an easygoing character – it’s less “busy” than rivals.

On the downside, the Jetta’s mileage potential suffers from the less advantageous gearing – the gear spread. The six-speeded competition can get going with less work due to more mechanical leverage (the tighter spacing between each forward gear). Note that the Jetta’s rivals return better economy with their (six-speed) automatic transmissions than the Jetta does with its five-speed manual. 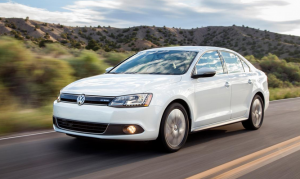 The TDI (diesel) Jetta does – ironically – come standard with a six-speed manual transmission (with a six-speed “dual clutch” automated manual optional). Why is it ironic? Because a diesel engine – unlike a gas engine – is a low-rev engine. It’s rarely necessary to spin it faster than 4,000 RPM (vs. 6,000-plus for a gas engine) to get going quickly.  There’s even more torque (236 ft.-lbs.), so even less need to shift often to leverage the available power.

It happened that we got slammed with snow and ice and extreme/savage cold during the week I had the Jetta. I was a little reluctant to take it out on roads hard-packed with said snow/ice due to the extreme/savage cold. The Jetta is, after all, front-wheel-drive and not touted for its snow-day legs. But its tenacity brought back memories of VWs I’d owned years ago… air-cooled/rear-engined VWs (’73 Super Beetle) which bullied through almost anything mother nature directed their way.

It helps that VW fits the Jetta (base and lower trims) with – gasp! – fifteen inch wheels and tires. The Mazda3 comes standard with 16s, which have the advantage of imparting crisper steering response due to the stiffer sidewall tires but the disadvantage of not being the hot ticket for snow-day driving by dint of the very same sidewall stiffness (and also the wider contact patch, which, ironically, can be a disadvantage for snow-day drives; you want narrower tires that slice through the snow – down to the pavement – rather than tires that compress and sit on top of the snow).

Larger (16 and 17-inch) wheel/tire packages are available (as is a firmer, sport-tuned suspension) for those who want the sharper steering feel and higher lateral grip on dry and snow-free pavement. 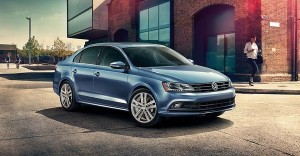 One of the Jetta’s most persuasive attributes is the roominess of its interior. Which is much roomier than several rivals’ interiors. Backseat room especially. The VW has 38.1 inches of legroom, which for perspective is nearly as much legroom as in a mid-sized sedan like the Toyota Camry (38.9 inches) and nearly six inches more legroom than in a Ford Focus (33.2 inches) and two-plus inches more than in the Mazda3 (35.8 inches).

The Jetta’s also got a mid-sized car’s trunk – 15.7 cubic feet . This is actually more trunk than the Camry (15.4 cubic feet) and significantly larger than direct rivals’ trunks (the Mazda3 sedan has just 12.4 cubic feet of trunk space). The VW’s load floor is also low – and the trunk lid opens big-mouth style, making the most of the space within. 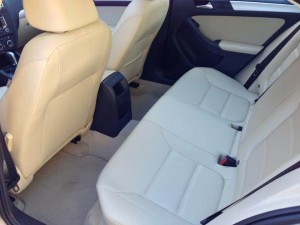 Visibility all around – and especially to the rear – is superior because the Jetta’s designers placed function ahead of form. The sedan may not look as sexy on the outside as the voluptuous Mazda3 or as sleek as the Focus – but the view from inside is much better.

If your teeth ache at the thought of touchscreen inputs and lots and lots of really small buttons, you will find relief here. The Jetta bucks the current trend – dazzle ’em with glitzy electronic interfaces – and beckons instead with simple, effective rotary knob controls for things like the AC system and a handful of larger buttons and just a couple of turn-knobs (volume and station change) for the stereo.

A touchscreen is available if you want it – but if you don’t, VW won’t force-feed it  to you. 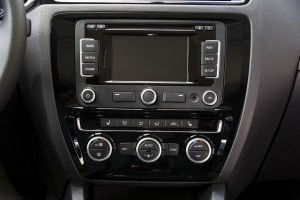 The driver’s seat comes standard with a height adjustment feature – a “German thing” that is extremely helpful as far as custom-fitting the car to you. The available seat heaters are top-drawer; delivering heat rather than merely warmth. The parking brake is still – thank god – a manual lever/pull-it-up parking brake. Which means it is viable as an emergency brake, if the need ever arises (electronic-engagement parking brakes are useless for that – or dangerous for that – because the pressure applied cannot be modulated and thus, engaging it with the car moving could and probably will lock the era wheels and send the car into a skid).

The only nit I’ll pick with the Jetta’s interior layout is the useless center console storage cubby. It is too far back, for one thing. For another, it is very tiny – about the size of a Pop Tart box. With the lid up, it is damned hard to even access the storage area because of interference issues as well as the too-far-back positioning. And why did VW install the USB port in there rather than up front, ahead of the gear shifter – and next to the 12V power point?

But these are small things, in the scheme of things. 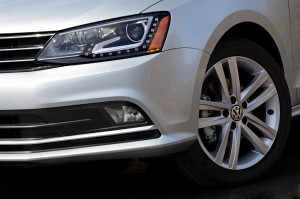 You may’ve noticed that the Jetta Sportwagen has been dropped from VW’s U.S. model lineup. It is, however, still available in Europe.

Blame American buyers – who seem to not like wagons very much. In Europe, wagons are as popular as sedans and virtually every model available there is available in a wagonized iteration.

VW is probably going to have to up its game, diesel-wise. As mentioned earlier, as good as the TDI’s mileage is, it’s not good enough anymore, given how close gas engined rivals have come to the TDI’s numbers. 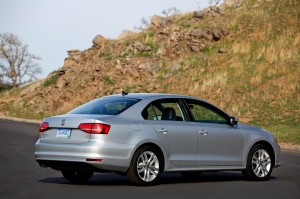 The problem is the government, which has imposed draconian emissions thresholds on diesel-powered vehicles (and diesel fuel) which has dramatically reduced their fuel-efficiency potential and increased their cost. Despite all the advantages of modern technology – including overdrive (and dual-clutch) transmissions as well as vastly superior aerodynamics and much lower rolling resistance – today’s diesel cars are less efficient than the diesel-powered cars of 30-plus years ago. A late ’70s diesel Rabbit was capable of 50-plus MPG. Granted, it was slow and smoky… but hey, 50-plus MPG.

The Jetta is like the tortoise in the story about the chelonian and the lagomorph. It’s not necessarily flash that wins the race.