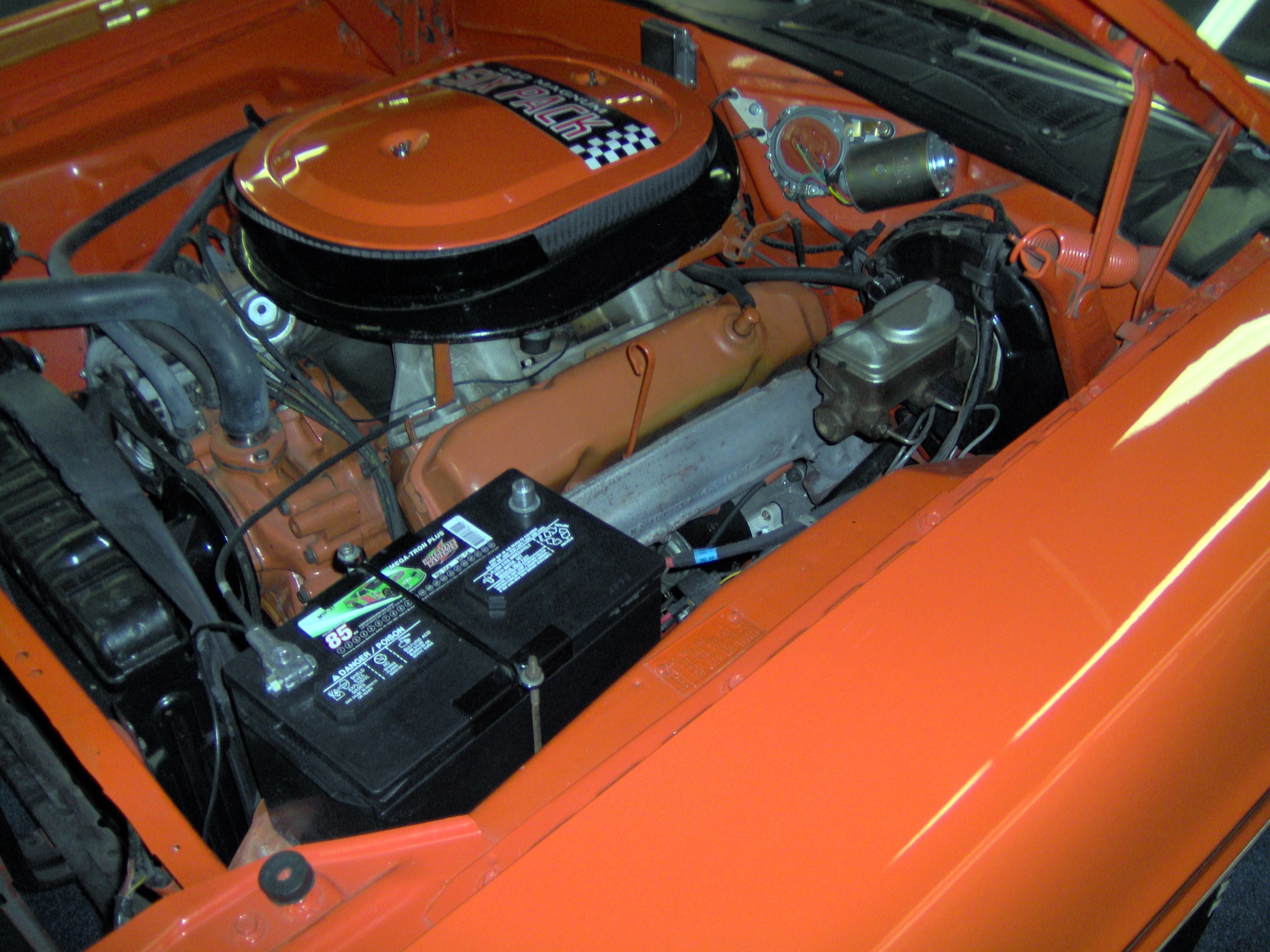 Modern car engines are hard to fault… objectively. They start immediately – even when it’s 15 degrees out. They rarely stall out – leaving you dead in the water in the middle of a busy intersection. Most require not much more from you than gas and oil for the first 100,000-plus miles from new. 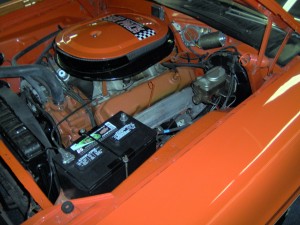 But when was the last time you turned off the stereo and rolled the window down just to listen to their music? Or proudly popped the hood for your friends?

Not much to see, is there?

You don’t need to be a gearhead to understand.

Ever been in a busy place, like a shopping mall parking lot, and heard the instantly recognizable sound of an old air-cooled VW? We turn to look – and smile, remembering. Anyone who was young in the ’60s knows the distinctive pitch made by a 289 Hi-Po Ford …the low bass rumpa rumpa rumpa of an idling big-block Chevy.

But not all the Great Ones died with the ’60s. Even during the dark days of the 1970s and early ’80s – when high performance cars had been beaten to the verge of extinction by emissions regs and general anti fun-car malaise, there were a few standouts that kept hope alive:

While the solid lifter-cammed, high-compression LT-1 that powered the 1970 Z28 Camaro and Corvette has claimed much of the limelight and worship of muscle car afficionados, the hydraulic cammed L-82 small-block is equally deserving of applause. 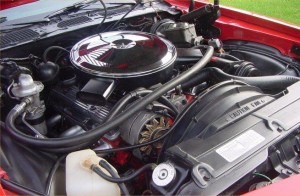 Unlike the LT-1, the L-82 was a survivor. It made it through the catalytic converter/unleaded gas gantlet, leaving the LT-1 to the history books.

Arguably, too, the L-82 was a better all-arounder than the powerful but temperamental LT-1 (which among other things needed to have its mechanical/solid lifter valvetrain adjusted every several thousand miles – or sooner). The L-81 had a no-maintenance hydraulic cam (still a performance grind, too) and a more reasonable compression ratio that tolerated the regular unleaded fuel an LT-1 simply could not abide.

The L-82 was a leas peaky engine, with excellent low and mid-range torque – so it worked well with an automatic transmission. The earlier LT-1, in contrast, came paired only with a manual transmission – and was a beast to live with in stop-and-go traffic 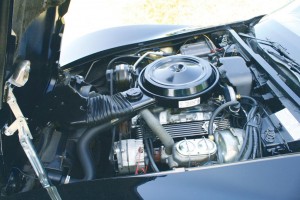 But it had the critical essentials to become a beast, if you so desired – including high-flow cylinder heads similar to the LT-1s. It also always made at least 200 hp (and as much as 240 hp) even during the darkest days of the mid-1970s, when any engine that rated such numbers was a hero, especially when compared to emissions and mileage-neutered V8s that struggled to produce 120 hp. The L-82’s availability on the options sheet kept the Corvette credible after 1975 – when its standard engine, at low ebb, was a 165 hp wheezer unfit for Nova duty and a moral outrage in a car that claimed to be “America’s sports car.”

What made the ’67-’81 Firebirds and Trans-Ams special was their unique, Pontiac-built engines. Nothing wrong with Chevy V8s. They are excellent engines. But they are not Pontiac engines. Without their unique, Pontiac-built V8s, the ’82 and up Firebirds were – mechanically speaking – little more than rebadged Camaros with slightly different exterior panels and trim. But 1981 and earlier Trans-Ams had their own personality, due in large measure to the bigger-than-Chevy-V8s under their shaker scoops. 6.6 liter 400s (and – through 1976 – 7.4 liter 455s) rathe than the 5.7 liter 350s in the Camaro. 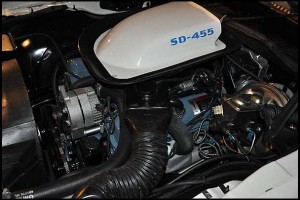 Though it shared its displacement with other Pontiac 455s, it was radically upgraded – beginning with a reinforced heavy duty block unique to the SD – onto which a pair of high-flow (“round port,” in Pontiac lingo) cylinder heads were perched, their big valves actuated by the most aggressive cam profile Pontiac engineers could get away with installing, the works fed by a specially calibrated (and also unique to the SD engines) 800-CFM Rochester 4-barrel carburetor on a medium-riser, dual plane intake. The combo netted 290-310 hp, depending on whose numbers you believe. And put a Trans-Am (or Formula Firebird) so equipped down the quarter mile in the very low 13s, on street tires. On slicks and with a little tuning, these cars could dip into the 12s.

Long before the Ram SRT-10 (or SVT Raptor) Dodge arguably created the ancestor of all modern muscle trucks – using a short bed flareside half-ton pick-up as the basis, powered by a stout police interceptor 360 that gave many of the fastest performance cars of the ’70s and ’80s a serious run for their money. The 360 used in the Lil’ Red Express – as the package was called – traced its origins all the way back to the old 340 Wedge small block of early ’70s AAR ‘Cuda days – and managed to produce 225 hp at a time when you were lucky to find 150 under the hood of the typical V8 powered passenger car. 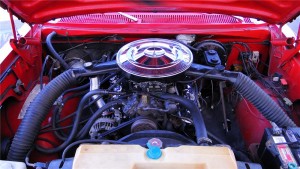 Dodge added to the already pugnacious character of the truck by fitting it with a pair big rig chromed smokestack exhaust pipes behind the cab and slathering the works with a fire engine red paint job. But best of all – because it was a truck -the Lil’ Red Express was exempt from the emissions and noise regulations that crippled passenger cars. It did not have to have catalytic converters! Instead, the 360 breathed through twin Hemi mufflers with a crossover pipe. The result sounded like nothing else on the road. But the glory was short-lived and after ’79 the Lil Red Express was retired – supplanted by more “socially responsible” models, like the K-car.

No, not Springsteen. The five-oh Mustang GT (ad LX) with the first genuinely hot factory V8 in years. Though it started out with just a two barrel carburetor and initially produced a tepid-sounding (by today’s standards) 175 hp, that was Big Stuff in the early ’80s – when “high performance” meant lots of stripes and decals, fake hood scoops and whale tails – but not much action under the hood. 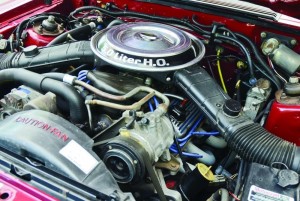 Ford beavered away on the resurrected 302 as the years passed, adding first a four-barrel Holley carb (hello!), then a dual snorkel low-restriction air cleaner and, eventually, even tube headers. By mid-’85, the 5.0 was genuinely potent, now at the 225 hp mark and destined to rise higher. The best part was that most of the hot-rodding down and dirty that worked so well on 1960s-era Ford small block V8s was equally applicable to the 5.0 – which was after all a 302 (despite the new way of referring to engines in metric-ese).

Coaxing 300-plus hp out of a basically stockFord 302 was both easy and relatively cheap. Even law enforcement jumped on the bandwagon – using quiet-looking LX hatchbacks without all the GT’s flash, but with the one thing that mattered for pursuit work: That screaming Ford small block.

Lord Vader, your car has arrived. 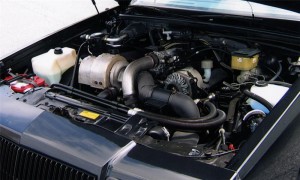 That was GM’s advertising copy for the Regal Grand National.

And not just because they were all painted black. Like Lord Vader, they were heavy breathers.

Or rather, breathed on.

The basis for the package was Buick’s mid-sized Regal, a “formal” hardtop coupe heretofore favored by business men Bob types. These were first sheepdipped in black – nothing except the chrome “3.8 liter SFI” badges on either side of the hood bulge wasn’t black – and fitted with a mucho turbocharged version of Buick’s own 3.8 liter V6, which had been around for many years prior but which – up to this moment – had never been tapped as a performance engine. But pressurized, injected and intercooled – the thing was transformed from young Skywalker to Sith Lord. 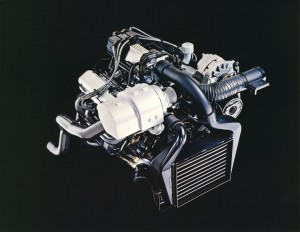 These cars were so ferocious the FBI bought a fleet of them for their own dark purposes.

Sadly, the line was culled when GM decided to nix most of its rear-wheel-drive platforms, which included the platform that served as the basis for the Regal, which served as the basis for the Regal Grand National (and the even fiercer Regal GNX). The then-rising front-wheel-drive platforms were not strong enough to deal with the epic power belted by the turbo’d 3.8, so it went away – not because it wasn’t wanted but because it had been effectively orphaned.

It was an engine without a car to put it in.

The last one rolled off the line in ’87.