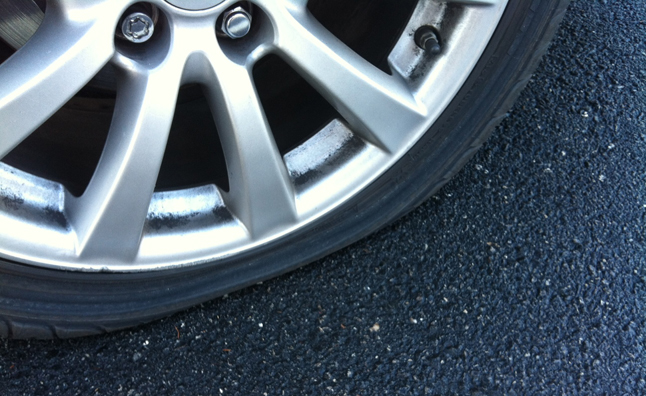 VW dropped off a new Passat TDI yesterday for me to review. Unfortunately, today, it’s at a local VW dealer.

Thanks to some large rocks.

I was headed down the mountain – via the Blue Ridge Parkway – and encountered a pile of rubble in the road. For those of you not hip to the Parkway, this is a fairly common thing. Rocks slough off the cliff facings that line the road.

Low aspect ratio (thing sidewall) tires do not like to run over rocks.

I bobbed and weaved, but there were just too many. Lost the two tires on the passenger side, front and rear.

I gimped the Passat off to the side and got the little scissors jack out – which actually worked very well (kudos to VW; often, these in-car jacks are downright scary flimsy and you’re taking your life – your limbs – in hand getting under a car “supported” by one). Put the space saver tire on the front right. But I had nothing more for the front rear. So – per the old song – I just limped on down the shoulder on the rim.

Was miles from anything not a tree and forget a replacement tire.

Of course it was pouring rain out, too.

After a long while of gimping, I got the Passat to the safety of an Exxon gas station – which of course was not a service station. Called VW. They called The Man. Who came with a flatbed, not a spare tire. 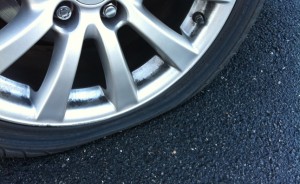 So the Passat is on hiatus until they get the tires fixed.

Meanwhile, I hope you guys enjoyed the latest rant about the dangerous freedoms allowed bicyclists. My hope is to get people who haven’t thought much about the issue in general – that is, principled – terms to connect the absurdity – the tyranny – of forcing cyclists to get licensed, tagged, inspected and insured with the same things applied to drivers.

I think it is the only way we’ll ever make progress.

Arguing particulars gets us nowhere. Worse, actually. It cedes the field before the battle’s even joined. Never debate a Clover – or a potential Clover – on utilitarian grounds. This is the error so often made by “conservatives” – who rarely if ever challenge a “progressive” (or “liberal” or whatever they’re styling themselves lately) on principled, conceptual grounds.

Theft, for example, is theft – period. Even when it’s called “taxation.” It is theft.

Stick to the point.

Similarly, if it is ridiculous and tyrannical to put a gun to a bicyclist’s head (or threaten to) in order to force him to be tested, licensed, tagged, insured – and so on – then the same applies to drivers and generally.

This scales. Apply the same method to almost anything you can think of.

Clovers are kind of like vampires in that exposing them to certain things – moral principles, for instance – makes them wilt.

Or at least, exposes them.

Makes plain what they are. Not just their lust to micromanage the lives of others – and to punish them (often, with with enthusiasm). But their fundamental nihilism. Their utter lack of any moral center. Just their vacuous feelings.

Which of course, vary from Clover to Clover.

The only thing they have is weight of numbers – which admittedly, is a considerable advantage. Marshall Zhukov, I think it was, quipped that quantity has a quality of its own.

But in the end, they’re nothings.

Read their posts in reply to the articles (and intelligent posters) here, for instance. Beyond their inevitable illiteracy, they never articulate a principled, logical argument in opposition. Just a spew of invective, usually. Often, at the level of a not-so-bright junior high schooler.

Eric I have proof that you were complaining about the car going only 49 mph in a 45 mph curve warning when you said he was a poor driver for only going 49 mph. Eric I have know proof that he was not going 55 mph before that but I do know you are a liar. I have proof of that many times. Eric if you have mental problems with someone only going 49 mph in a 45 mph recommended max speed then why the hell do you live by such a road? Eric are you really that stupid when you purchased your house that you did not know that you may have to drive below 70 mph on such a road? Eric why don’t you move or maybe just blow your brains out because you are not able to control others around you!

well i think its a good thing because young and irresponsible kids need to be controlled. As do reckless speed demons like yourself erick.

Again Eric you are both stupid and a liar.

Zhukov had a point about the masses.

But it’s the critical mass that matters most.

And we’re getting there.