Apparently, our money’s not enough.

They want our blood, too.

You may have heard about this. In Texas – one of America’s, uh, “freest” states – the cops have got the power to throw you over the hood of a cruiser and forcibly extract your blood if you decline to take a Breathalyzer test. After having been forced to stop for no specific reason at a “sobriety” checkpoint. Your refusal to cooperate – that is, to prove your innocence (that’s how it works in America nowadays) to the satisfaction of a cop is all the provocation necessary. Roll down your sleeve.

Count (oops, Police Chief) Art Acevedo of the Austin PD wants to expand what had been a “pilot” program – weekends only – to a full time regular operation. 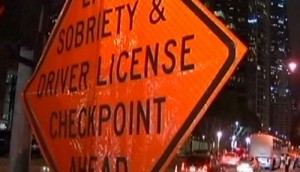 Inevitably, other states will follow. Oregon already has. At some point, the Supreme Court will “affirm” the “constitutionality” of these blood draws. Why not? It has already affirmed the “constitutionality” of all sorts of obviously not constitutional practices – including the random and probable cause-bereft stopping of motorists to force them to prove they aren’t guilty of pretty much everything in the motor vehicle code (e.g., you’re forced to prove you have a license, the mandatory insurance, that your car is registered and has all the demanded stickers, that you are buckled up for “safety”, etc.). If these fishing expeditions are reasonable (as demanded by the Fourth Amendment) then what constitutes an unreasonable search?

Nominally, search warrants are still required before the syringes puncture your flesh – per a 2013 Supreme Court decision to that effect. But it’s a pro forma (read, rubber stamp) exercise. The warrants are approved reflexively, as a matter of course. Because – words of the court – refusal to voluntarily provide a sample constitutes “consciousness of guilt.”

Might as well have one of those machines – like they have at the airport long-term parking lot – that spits out the piece of paper when you push the green button. It’s not like it was back when America still had a semi, rule-of-law-wise and it was actually necessary to go before a judge or grand jury with evidence, which would be considered and which had to rise to a fairly high standard before a warrant was issued.

Ah, but this took time. 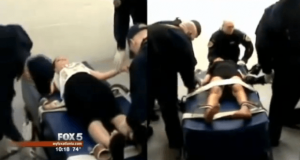 And cops – law enforcers – cannot abide this. Justice must be served piping hot and steaming fresh. Better to kick down the wrong door in the middle of the night or jab needles in the arms of “suspected” behind-the-wheel-tipplers (and tokers) than fuss with all that tiresome rule-of-law stuff.

For instance, that weird and strange idea that no person may be compelled in any criminal case to be a witness against himself. Fifth Amendment. And as legally irrelevant today as the Fourth Amendment’s prohibition of unreasonable searches. Both very ungoodthinkful and doubleplusungood.

Our “freedoms,” you see. It’s what they hate us for.

The government, that is.

Who are the enemies of our freedom.

How is this business worse than Sharia Law? Seriously. Substitute The State for Allah – and it’s the same thing. The least show of disrespect – which now includes declining to cooperate in your own railroading – will result in an ultraviolent response. Instead of ululating, you’ll hear stop resisting! … but what’s the difference?

Maybe they don’t kill you – well, not as policy (yet). But how far down the road can that be?

If you’re over 40 – and still dimly remember the America that used to be – you will no doubt marvel (despair is probably a better word) that such things are happening. Things which would have been literally not believable as recently as 20 years ago.

Cops forcibly holding you down and shoving a needle in your arm to extract your blood because you asserted your former right to not participate in your own incrimination. Of course, this is not new. It’s just that the principle has been expanded. How many decades has the Ministry of Plenty (aka the eye r s) required – under penalty of law! – that you provide them with… well, whatever they demand? That you swear – under penalty of law! – that all the information about your affairs you’re compelled to provide them with for purposes of trying and convicting you of whatever crime they choose to charge you with is without error or omission?

Keep in mind that these vampiric cops are the same cops who have already been sanctioned by the same courts to strip search you and probe your anus or vagina with their fingers following an arrest for any offense – including routine traffic offenses (Florence v. Board of Chosen Freeholders of County of Burlington, et al; see here). Remember: Arrest means they simply assert you’ve done something illegal. They do not have to prove it to arrest you. And then probe you.

Once under their power, you are – legally speaking – powerless. Even to the extent of declining to provide evidence that can and will be used against you.

And even if there is no evidence of anything “illegal.” 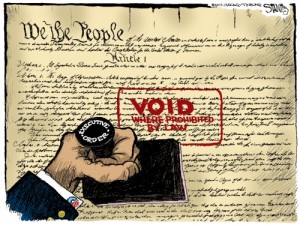 Your mere refusal to play their game – to perform the roadside acrobatics, to exhale into their notoriously unreliable Breathalyzer – now constituting sufficient legal warrant to extract your bodily fluids using whatever force is necessary.

Because “exigent circumstances” – and so on.

The fools who support this do so under the delusion that since they have nothing to hide, no possible harm can come to them. What harm, after all, could possibly come from empowering the government to assault people at random, without the legal necessity of having to adduce some specific reason to suspect them of having committed a crime prior to the assault?

They are, after all, only trying to keep us safe.