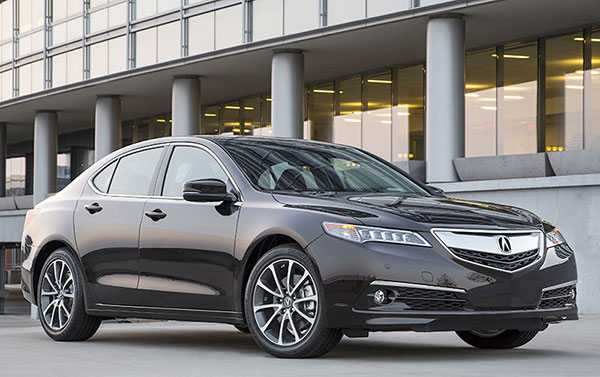 The usual practice is to make ’em bigger – and more expensive. 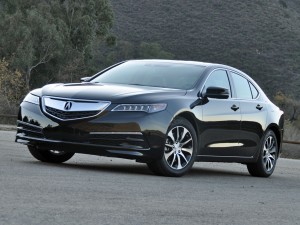 Here’s an instance of the opposite.

The TLX is a smaller car than the car it replaces (the TL) and it comes standard with a four cylinder engine (the TL came standard with a V6) which is probably why it costs so much less to start: $31,695 vs. $36,030 for the base trim TL (RIP).

By dropping the price, Acura hopes to straddle the gap between non-luxury-brand sporty sedans like the Nissan Altima and Mazda6 (which don’t offer all-wheel-drive) and the entry-luxury stuff like the BMW 3 and Audi A4 (which do offer AWD but generally cost more when so equipped). 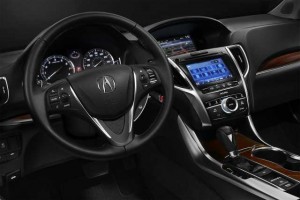 Like all Acuras, the TL is based on a front-wheel-drive layout, but it offers four-wheel steering – something neither the lesser-badged (and FWD-only) Nissans and Mazdas, et al, offer.

Nor the more expensive prestige-brand BMWs and Audis.

And the TL’s standard engine – while not turbocharged (as most of the entry-luxury cars’ fours are) is nonetheless much stronger than the also-not-turbocharged fours that come standard in cars like the Mazda6 and Altima. 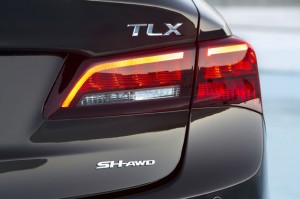 It slots in between the compact-sized, entry-level ILX sedan and Acura’s flagship sedan, the full-size RLX.

It is smaller overall than the TL which it replaces – but much less expensive. Base price, as above, is $31,695 for a front-wheel-drive model equipped with the standard 2.4 liter, four cylinder engine and eight-speed automated manual transmission.

The TLX was added to Acura’s lineup last year as an all-new model. The ’16 carries over essentially unchanged.

Base four cylinder engine is not turbocharged – but isn’t a weakling.

Attractive pricing; buy a luxury-brand, AWD-equipped sedan for about what you’d spend on a loaded FWD Maxima. 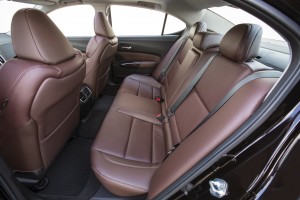 Back seat legroom is way down vs. the old TL

Unavailable with a manual transmission.

It’s not surprising to find a four-cylinder engine under the hood of the new TLX.

This is why even luxury-brand cars now routinely come standard with small four-cylinder engines rather than the previously typical big sixes (this includes the outgoing TL, which came standard with a 3.5 liter V6, with an even bigger 3.7 liter V6 available as an option). 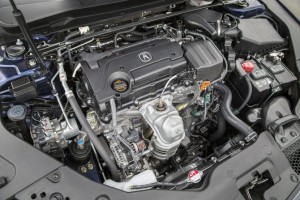 What is surprising is that the TLX’s standard 2.4 liter four isn’t turbocharged – as most other entry-luxury sport sedan fours are.

Nonetheless, Acura manages to squeeze 206 hp out of it, which is in the ballpark of the power made by the turbocharged fours in competitor vehicles and certainly class acceptable.

The peppy little four is paired with a new dual-clutch eight-speed automatic with multiple driver-selectable modes and rev-matching downshift capability plus a torque converter – which is not common.

Acura incorporated a torque converter into the design of its automated manual to address that problem. The four-cylinder TL can do the 0-60 run in about 7.3 seconds. 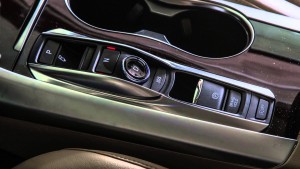 Optional is a new-design 3.5 liter V-6. This is not a carryover engine. It is direct-injected and high-compression (11.5:1) and features both i-VTEC and Variable Cylinder Management (VCM) which automatically shuts off three of the six cylinder during light-load/cruise driving to maximize fuel efficiency.

Models equipped with the V6 and the optional Super Handling All-Wheel-Drive rate 21 city, 31 highway – better than the ’14 TL with front-wheel-drive (the TL with AWD was a guzzler: 18 city, 26 highway). 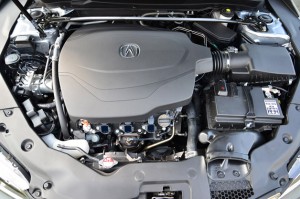 The V6 is paired with an also-new nine-speed automatic, sourced from ZF.

It’s not a dual-clutch automated manual, but the range of possible forward gears allows for closer/sooner upshifts – which is part of the reason for the new TLX V6’s also-excellent EPA numbers.

The SH-AWD system can kick power to individual wheels – or wheels in pairs – as needed to maintain traction and enhance stability. There is an LCD display in the main gauge cluster that shows you the power split, in real time.

SH-AWD is an upgrade over the typical AWD system in that it provides a practical assist on bad weather days (rain and snow) as well as a performance assist during high-speed cornering.

The SH-AWD system is, however, only offered with the V6.

But if you buy the 2.4 liter engine (or the V6 with FWD) you’ll get Precision All-Wheel-Steering (P-AWS) included. The system does what it sounds like it would. Instead of directional control being a function of the front wheels only, electric motors adjust the angle of the rear wheels to assist in the curves. This makes the TLX easier to steer at low/normal speeds as well as ups the handling ante when you’re running faster. 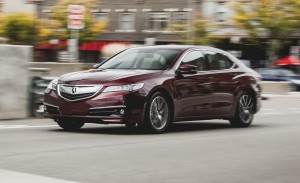 Less engine (size-wise, at least) and more gears to leverage the available power sounds like a mixed bag on the face of it. Fun, certainly – in the way that a motorcycle is fun. A bike’s drivetrain is always doing something – revving, shifting – and that engages you in the process.

On the other hand, riding a bike for long periods – revving and shifting – isn’t for everyone.

But don’t worry, the TLX’s four – though it can sing like a liter bike’s four when you want it to – doesn’t need to in order to maintain the pace. Part of the reason for this being the technically brilliant eight-speed transmission that’s paired with it. Like other such transmissions (e.g., the VW/Audi DSG) it is an automated manual transmission, with electronically controlled clutch engagement. Two clutches, in this case – one set engaging/disengaging the even forward gears (2, 4, 6 & 8) another the odd (1, 3, 5 & 7), which Acura says cuts down shift intervals significantly, for both quicker-feeling and more efficient shifting. 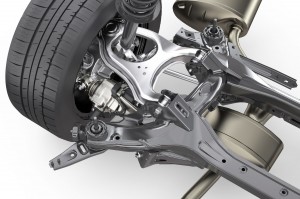 But the key thing is the box’s torque converter – a feature of conventional automatics that few (if any) other-brand automated manuals on the market offer.

If you’ve driven other DSG-equipped cars, you may have noticed they take a moment to get going when you floor it from a dead stop. It’s because they don’t have a torque converter. It takes a moment – not long, but noticeable – for the engine to build speed and thus, power. The torque converter lets the engine rev up faster, so it builds torque sooner. So how come everyone else doesn’t use a torque converter? In a word, slippage. The very quality that lets the engine rev/build power when you floor it from a standstill also (historically) entails an efficiency loss, which is why automated manuals and continuously variable (CVT) automatics have become so commonplace. 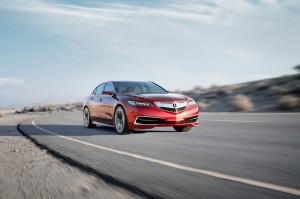 If you shop this car, try the 2.4/eight-speed combo before you buy. I’m not saying don’t buy the V6. I’m just advising you not automatically rule out the little engine, thinking it’s an economy engine.

It’s also unique in this class for being paired with a a four-wheel-steering system (P-AWS), which automatically (electronically) alters the toe angle of the rear wheels to make the car more maneuverable at low speeds as well as corner more controllably at high speeds. From the driver’s point of view, it’s unnoticeable – in the sense that you can’t tell when the rear wheels are changing their angles. It’s an upgrade over the usual/typical stability control system – which reacts to instability by pumping the brakes. Acura’s system enhances stability by altering geometry. It’s pretty neat.

The system comes standard with both engines, too. 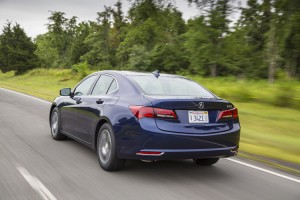 The optional SH-AWD system  (V6 TLXs only) is similar in concept to the previous SH-AWD system that was available in the TL. It features “torque vectoring,” or the routing of power not just front to back under acceleration also to individual wheels when cornering – but the weight of the system has been cut down by 25 percent.

This – along with the upgraded V6 (direct injected) – accounts for the improved performance and fuel economy.

The previous TL handled well, but it was heavy – and thirsty. 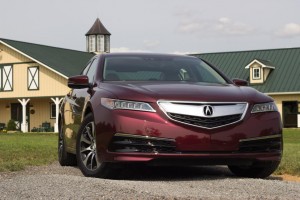 Acura began as a kind of anti-Lexus.

But over time, Acura developed a beer gut – while Lexus edged ever-sportier.

The new TLX – and other new Acuras – is an attempt to return the brand to the Integra (and NSX) zeitgeist of the ’90s. 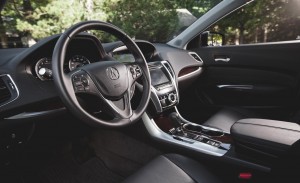 There is a price to be paid for youthful good looks, though.

Still, this is in the ballpark when you compare the TLX’s stats with those of others in its price range, such as the BMW 3 and Mercedes CLA (which is a compact sedan).

The TLX is smaller overall (and inside) than the old TL, but it’s still mid-sized.

Just leaning a bit more in the direction of compact-sized.

The latter was perceived as being more prestigious as well as superior in terms of handling/driving feel (the weight of the car being more evenly distributed) while the former was looked upon as – fundamentally-  an economy car layout. 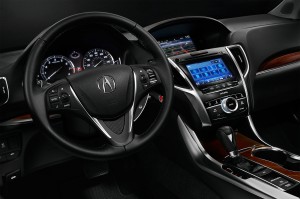 But this is no longer true – or at least, not as true as it used to be.

In the first place, it is very hard (on the street, within legal road speeds) to tell the difference, handling-wise, between a FWD-based AWD car and RWD-based AWD car. In addition, many prestige brand cars are AWD or offer AWD.

Also, the FWD-based layout no longer appears to be a marketing liability.

Cadillac is already there.

And of course, there’s Audi. 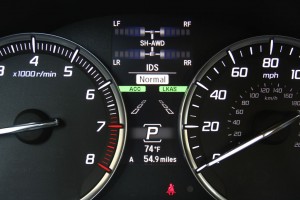 I did a separate article (see here) about the TLX’s available semi-self-steering technology. It’s formally called Road Departure Mitigation and uses cameras built into the front end to orient the car’s position in between the yellow and white lines. When engaged, the system will automatically steer the car (within certain boundaries) to keep it within its travel lane. The driver feels this as a light – but noticeable – assist. It is possible – though not recommended – to take both hands off the wheel and watch the car drive itself. Just be mindful, because the car can’t take sharp curves on its own and if the cameras can’t see the painted lines, the car will wander.

It’s a preview of things to come.

Acura has also added a small but helpful feature it probably copied from Kia/Hyundai – whose cars had it first:  A button near the shifter you can press when stopped at a red light that will apply the brakes and hold the vehicle stationary without the need to take it out of gear – and without the need for you to keep your foot on the brake.

Press the button again to release the hold and be back on your way.

TLXs with the SH-AWD system come standard with auto-stop/start – a gizmo that is quickly becoming a de facto standard in new cars generally. See earlier discussion about fuel economy pressures emanating from Washington to grok why this is so. The system can be turned off, thankfully. 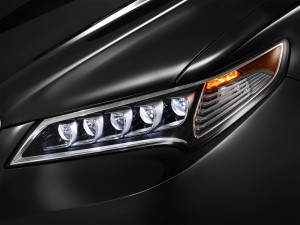 The car’s seat heaters are excellent – and the optional 455 watt, 10 speaker ELS/studio sound system is superb. The On Demand Multi-Use Display (ODMD) is a mouthful to say but not a PITAS. Tap and touch, legible graphics and an attractive display. The USB and HDMI ports are both located driver-accessibly (with the car moving) in front of the shifter, at the bottom of the center stack.

When battleships fired their big guns, the object was to straddle the enemy ship. Not overshoot – or undershoot.