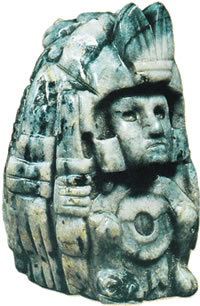 With real crimes – that is, actions that result in real harm to real people – it is easy enough to objectively define the crime. 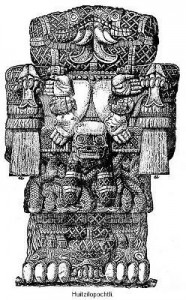 You either did – or didn’t take something that belongs to someone else.

You either did – or did not – hurt someone else.

If you did, then it’s right and reasonable that you – the causer of the harm – be held accountable.

“Speeding,” on the other hand, is an odd sort of crime.

In most cases, no harm has been caused to anyone. A statute has been offended, nothing more.

To whom must the “guilty” party make amends?

Since there is no actual victim, the “guilty” party is put in the position of a supplicant propitiating a rock sculpture of Huitzilopochtli in a kind of secular take on the religious concept of punishing the sinner for transgressing “god’s laws.”

The state and its statutes serving as stand-ins for Huitzilopochtli and his holy writ.

Cops serving in the role of Priests – their Glocks a modern take on obsidian daggers.

The proscribed act – “speeding” – is like “sin” …. an arbitrary edict eructing from the stone mouth of a god created by men who demand obedience in “his” name.We laugh at the poor Aztecs for cringing before Huitzilopochtli – but what’s the difference, really?

In 1970, it was legal to drive 75 MPH on the highway. Then – at the stroke of Nixon’s pen – it became illegal “speeding” to drive faster than 55 MPH on the same highway. Nothing had changed – except the sign (and the law).

Then – at the stroke of another politician’s pen – it became legal to drive 75 again… on the same road.

Were the millions of people  pulled over for “speeding” during the 20-year reign of the Double Nickel guilty of any moral wrong? Or had they merely displeased Huitzilopochtli-Nixon?

Contrast this with actual crimes (properly defined) which always have a victim – regardless of statute.

A guy who just shot someone during the course of an armed robbery would never exclaim – but who did I harm? And even if the guy is a sociopath with no remorse for his actions, he still understands that he’s harmed someone. He may not feel bad about it, but he does understand it.

And regardless, there is a victim – no matter how the perpetrator feels about it.

On the other hand, when you get pulled over for “speeding,” where is the victim? Do you feel chagrined?

Or do you feel angry?

It’s just a game – a kind of kabuki theater – and most of us understand this implicitly. Including the cops who hand out the tickets. After all, they “speed,” too – routinely. 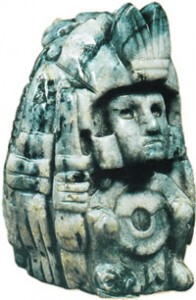 What does that tell you about this confected “crime”?

So why are there speed limits?

The generous answer that’s usually trotted out  – leaving aside the ungenerous one that the main object is to facilitate the collection of revenue – is that they are necessary to keep “people” from driving “too fast,” that being defined as faster than is “safe” for them to drive.

Perhaps you see the problem.

How does one determine whether a given speed is “safe” – and another speed “unsafe”?

These are not easily nailed down.

So, instead, speed limits are dumbed down. One size-fits all, except it really fits none.

Such that everyone – just about – “speeds” routinely. Including cops.

This is the strongest proof that most speed limits are absurd. How can a speed limit be valid as a speed limit if most drivers are going faster and – somehow – managing to drive safely? The proof of which is that most people who are “speeding” aren’t wrecking. 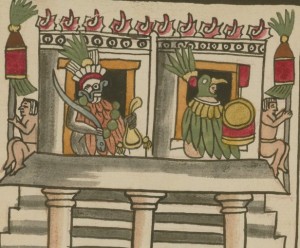 A speed limit implies “this is the absolute fastest it’s safe to drive on this road.” Any faster and you’re on the knife’s edge – like Tony Stewart  hugging the wall at Daytona.

Speed limits actually are nothing more than a manufactured maximum – a legal prohibition – as opposed to a moral one, like don’t steal or kill other people.

They are analogous to having a drink during the Prohibition era.

It was illegal, but almost everyone did it anyhow, including those charged with enforcing the law. Like speed enforcement, Prohibition was both cynical and corrupting. It made a mockery of legitimate law (that premised on harm done) and ate away like an acid at the ordinary person’s respect for the enforcers of the law while also doing the same to the self-respect of these said enforcers (those who were human beings with operative brains and a still-kicking moral sense).

The same applies today, to “speeding.”

Most cops know exactly what they are doing when they pull some poor victim over and hit them over the head (perhaps literally as well as figuratively) with a $150 ticket for having committed a non-crime they themselves probably just committed in “pursuit” of their victim.

It must wear on them as much as it angers us. 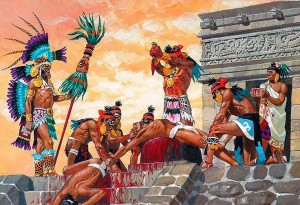 Speed limits make no sense because no one can make sense of them. Saying – to paraphrase a high priest of Huitzilopochtli – “I know it when I see it” isn’t good enough.

There must be a standard – and not an arbitrary one based on offending a statute.

It is preposterous to criminalize Driver X for operating at a certain velocity when his driving cannot be faulted on grounds other than his velocity – or because Driver Y was unable to safely handle his car at that velocity (as evidenced by Driver Y having lost control of his vehicle). It is like demanding that young, healthy people not run because old people can’t.

As in everything, people are not equal. One size does not fit all.

Speed limits presume otherwise – and punish people who’ve done nothing to anyone.

Their only offense is affronting Huitzilopochtli.

The Volt Sleeps With The Fishes