Those, according to newly released bodycam video, are some of the last words spoken by Chase Sherman as sheriff’s deputies armed with Tasers struggled to subdue him in the back seat of a car stopped alongside an interstate highway in Georgia last November.
Sherman’s parents, who were traveling with their son from Atlanta to their home in Florida when the 32-year-old began acting erratically, contend their son was later shocked with a Taser until he died.
At a news conference in Atlanta on Friday where they were accompanied by their attorney, the couple said they will seek federal charges if local authorities do not prosecute the Coweta County deputies involved in the fatal encounter.
Whether there is criminal prosecution, said their attorney, Chris Stewart, there will be a civil suit.
“This man was tasered to death and had a knee put on his chest until he suffocated — while handcuffed,” Stewart said. “It’s a sad testament to how we treat the mentally ill or people that are having a breakdown.”
As previously reported by CNN, the death certificate for Sherman lists the cause of death as a homicide due to “several pulls of an electronic control device” and “compression of the torso by the body weight of another individual.”

‘A final decision has not been made’

Dashcam and bodycam video from officers on the scene was released by Coweta County prosecutors. District Attorney Peter J. Skandalakis said in a statement that “the review of this case is not complete, the investigation is ongoing and a final decision has not been made concerning the outcome of this case.”
The fatal encounter began when Coweta County deputies responded to a 911 call from Sherman’s parents as the family traveled south of Atlanta. In an interview with CNN in March, parents Mary Ann and Kevin Sherman described how their son’s behavior had become worrisome as the family waited in Hartsfield-Jackson Atlanta International Airport, preparing to board a flight home. They were wrapping up a trip from the Dominican Republic, where they had attended the wedding of another son. 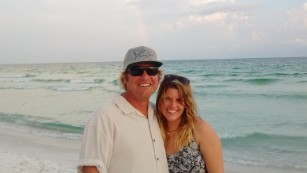 Chase Sherman with his fiancee, Patti Galloway,
Chase Sherman said he didn’t want to get on the plane, his parents told CNN, so the family and Chase Sherman’s fianceé, Patti Galloway, decided it would be better to rent a car and drive the five hours home to Destin in the Florida Panhandle. The Shermans said Atlanta police officers stationed at the airport noticed Chase Sherman was having problems, escorted him to the rental car and calmed him down.
Just south of Atlanta, Chase had another episode. He didn’t recognize his parents, was convinced he’d been kidnapped and tried to get out of the car, according to his parents. The Shermans decided to call for help to get their son to a hospital. On a 911 call, Mary Ann Sherman said her son was on drugs and was having a mental breakdown.
She stressed he was unarmed and asked that responders not hurt him. It was the first time she had ever called the police in her life, she told CNN.

What the sheriff has said

According to the Shermans, when Coweta County sheriff’s deputies arrived, the officers didn’t ask what the problem was or try to de-escalate the situation. Rather, they climbed into the back seat where Chase was buckled and handcuffed him.
The Coweta County Sheriff’s Office did not reply to CNN’s request for comment, but Sheriff Mike Yeager told Atlanta’s WXIA the deputies were trying to defend themselves while getting a combative person under control.
“The officers’ intent was to get this individual under control and put him in an ambulance and get him to the hospital to be evaluated,” Yeager said. “Those officers didn’t arrive on that scene looking to kill somebody.”
In the footage released by Coweta County prosecutors Friday, Chase Sherman is seen struggling with his hands cuffed behind his back and several times appears to reach for deputies’ Tasers as they appear to continually shock him. Deputies at one point tell the continually struggling man they will shoot him if he keeps trying to get the Taser, as his mother screams, “Don’t shoot him, don’t shoot him” from the front seat.
Eventually, deputies pin the man down on his stomach on the floor of the vehicle.
“The officers didn’t stop. They didn’t get off his back and they crushed him,” Stewart said Friday.
Moments later, as shown on the video, officers realized the man had stopped breathing.
Referring to the bodycam video, Stewart said, “What you see is a man in the backseat having a mental breakdown … and I guess what America learned today is that you get the death penalty from certain police officers.”
In his statement, District Attorney Skandalakis quoted Mary Ann Sherman as telling dispatchers in her 911 call that her son was “freaking out … he is on some kind of drug.”
When deputies responded they “were able to get the family of Mr. Sherman moved to safety but Mr. Sherman was physically combative and would not cooperate in getting out of the back seat. The deputies responded with the use of Tasers in order to force Mr. Sherman to comply with their commands. Multiple attempts were made to subdue Sherman but the Tasers did not seem to have an effect,” the district attorney’s statement said.
When deputies realized Sherman was not breathing, “They pulled him from the vehicle and attempted to resuscitate Mr. Sherman, but they were not successful,” the statement said.
Kevin and Mary Ann Sherman wept during Friday’s news conference as they called for prosecutors to hold responding officers accountable in light of the video.
“I was shocked,” Kevin Sherman said. “These dirty dogs didn’t know when to quit. That boy didn’t deserve what he got.”