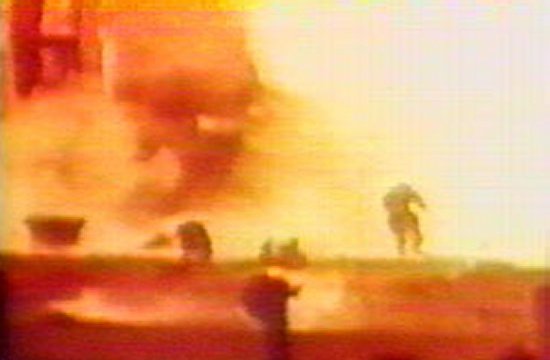 The Russians never got to the Moon – because their Moon Rocket, the N1, had trouble getting off the launch pad in one piece. It’s the same problem Elon Musk’s Falcon 9 Space X rocket has been having.

It blew up on the pad back in September – taking a lot of taxpayer dollars with it.

Space X is a money-loser. Tesla Motors is a money loser. Both are gaping black holes that suck up resources and spit out things that don’t work or cost too much.

Yet the government continues to hand over money to Musk. Our money. Lots of it. Space X has burned through a reported $900 million, almost all of it insider-deal government contracts, including $400 million to develop the “next generation of U.S. human spaceflight capabilities.” 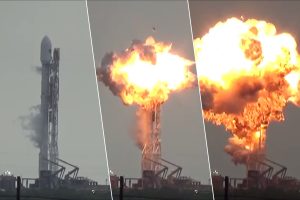 Better yet, focus on keeping his hands out of our pockets.

That’s the real problem with Space X – with all of Musk’s operations: They live off the taxpayers’ dime. Could not live without the umbilical cord of taxpayer support. Which, apparently, is bottomless – regardless of Musk’s failures (plural) to deliver on his hocus pocus promises.

At least the Soviet Moon program was not a crony capitalist operation. There were surely cost over-runs and inefficiencies, but no Soviet pseudo Tony Stark/Iron Man was milking the Soviet people, as Elon Musk is doing to the American people.

He gets away with it, in part, because the media fawns over Musk as if he were Tony Stark (whose big screen creations, unlike Elon’s, at least work).

The New York Times – a once-respectable publication – recently published another fanboi gushy but economically illiterate opus about Musk, characterizing him as a jobs creator whom President-elect Trump ought to “consult” about “reinvigorating the manufacturing sector.” 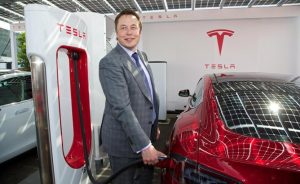 This would be a pants-pisser were it not so sad.

No one was forced to “help” Trump build Trump Tower – and taxpayers don’t have to pay taxes to “help” people stay there, either.

Unlike Tesla’s electric cars – which are “sold” at a net loss each, even with massive subsidies propping up their manufacture.

Trump creates jobs. Defined as a net plus to the economy. The people who work for him are employed doing productive tasks that people are willing to part with their money to pay for – from the bell hop to the guy piloting Trump’s 757.

Which he also paid for using his money – not yours and mine. 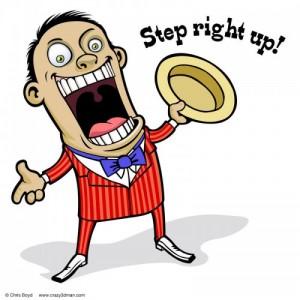 Every job he “creates” is in fact a wealth transfer from an unwilling tax victim, forced to subsidize the job “created.” All the money sucked from the pockets of taxpayers could have been used by them to create real jobs in the real economy, as opposed to make-work jobs in the Musk Economy.

The Times’ writer is a mark. People familiar with backroom card games will recognize the term.

The Times’ writer – like most of the media – fell for Musk’s carny barker shtick. It’s understandable. Electric cars sound like a great idea – until you do the math. Until you discover that they are not cost-effective alternatives to conventional cars. Which is why Tesla sells them as luxury and performance cars, soft-selling the economics of the things. Is there anything more ridiculous than spending $70,000 (the base price of a Tesla S) to “save gas”? Is there anything more obnoxious than mugging ordinary working people to “help” rich rent-seekers drive around in $70,000 cars – electric or otherwise?

His Solar City thing sounded good, too. Who wouldn’t like the  promise of free or nearly free energy? Then you find out about the cost of the panels – about the decades it will take to recoup your up-front costs. Which you may never recoup. Musk had to resort to financial flim-flams such as transferring money from Space X to provide operating capital for his Solar City sinkhole. One hand washes the other – only it’s us who’s paying for the soap. 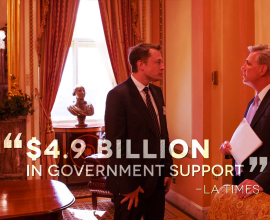 His network of “supercharger” electric chargers – wonderful! Until you read the fine print and find out that it takes at least 30-45 minutes for each electric car to juice up. The lines that will form begin to make your teeth ache.

And this SpaceX stuff.

Musk is using the taxing power of government to finance his “vision” of tripping people into orbit – and then to Mars – at a hefty per diem each, Why is it the obligation of American taxpayers to underwrite this venture?

Why can’t musk – a billionaire – underwrite his own grandiose schemes?

Could it possibly be due to the fact that they’re not economically viable on their own? That without an IV line to the lifeblood of taxpayers, Musk’s entire Crony Capitalist empire would topple like a rickety Jenga tower?

If he really is Tony Stark, if his engineering ideas are sound, if their economics make sense, then why can’t they stand on their own two feet?

The idea that this guy – arguably the greatest con man since PT Barnum and almost cartoonish archetype of crony capitalism – is someone President-elect Trump ought to be getting economic advice from is as risible as seeking out the Pope for tips on how to pick up girls at bars.