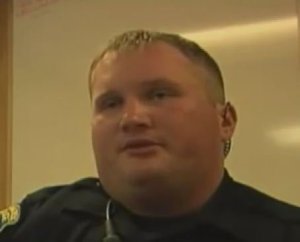 You remember this one. A California “hero” cop – Patrick Feaster – pursued a driver over a traffic offense (apparently, “drunk” driving). The driver wrecks and the “hero” blows the driver away as he tries to get out of the wrecked car. Here’s the video:

The “hero” – who already got the Blue Discount – a manslaughter charge rather than second-degree murder (as any non-“hero” ordinary citizen almost certainly would have in the same circumstances) will be released after serving just half of the already ridiculous 180 day sentence he received. That means that Feaster will serve just 90 days once “good behavior” is factored into his case.

Via KRCRtv.com, the local ABC affiliate:

Butte County Sheriff Kory Honea confirmed Monday that Feaster is entitled to earn “half-time” credit, meaning Feaster could be released from custody after serving 90 days of his 180-day jail term.

Should the former officer break jail rules or incur some sort of discipline, some of that time could be taken away as part of a disciplinary process, Honea said.

“We’re going to do everything in accordance with the law,” the sheriff said.

Feaster was sentenced Friday in Butte County Superior Court in Oroville to 180 days in jail and three years of probation following his felony conviction of involuntary manslaughter in October.

A jury found Feaster guilty of involuntary manslaughter stemming from the shooting of 26-year-old Andrew Thomas in the early morning hours of Nov. 26, 2015, in Paradise. Feaster shot Thomas in the neck as approached an overturned vehicle that Thomas had been trying to climb out of.

Initially, Butte County District Attorney Mike Ramsey announced that he would not be filing any charges against Feaster, based on the obviously false claim that it was an accidental discharge. However, Feaster was eventually fired and then charged with involuntary manslaughter once the man he shot, Andrew Thomas, died.

Prior to the trial, it was also revealed that Feaster had failed to even tell the other “heroes” on the scene that he shot Thomas. Audio that was released after the original video includes them telling Thomas he hadn’t been shot, then asking him if he had been shot at the bar he was spotted leaving prior to the accident after he told them that it was Feaster who had shot him. At least eleven minutes passed before  Feaster finally decided to tell the other cops that he had shot Thomas.

Once the DA finally and reluctantly charged Feaster with manslaughter, the favorable treatment continued without interruption. Feaster was released on his own recognizance without any bail requirement. That continued even after he and his brother were arrested on a drunk and disorderly charge while he was awaiting trial and still on bail.

During the trial most of the focus was on how much the man who had cold-bloodedly committed murder had suffered as a result. During the sentencing trial after his conviction, the defense attorneys and Feaster’s family spoke about how his life had been ruined and he had lost his career as a police officer. They maintained that that was punishment enough, in spite of the fact that Feaster had literally taken someone’s life and the only “justification” offered for that action was “the way Thomas tried to get out of the car” – that somehow being a “threat” to him, even though it clearly wasn’t.

Whatever Happened to The Ricers?