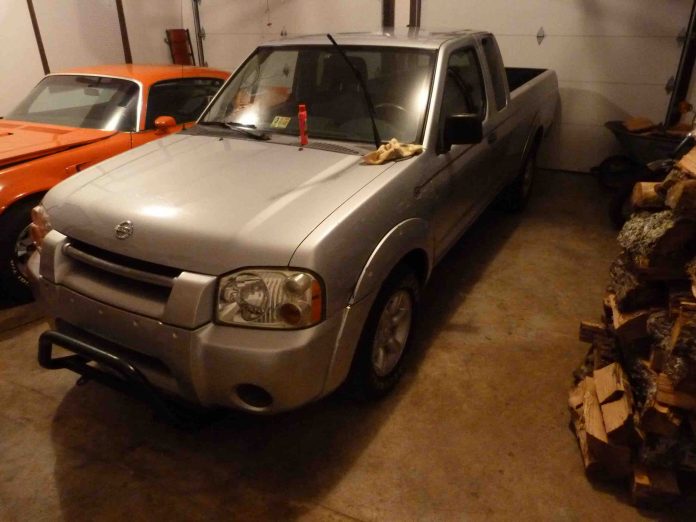 Well, the circle is complete. Silverbell – my ’02 Nissan Frontier – is mine again. I’ve bought her twice. Once from a dealership in West Virginia. . . and now again, from my wife. Who soon won’t be anymore.

She had been driving it during the period when we were trying to figure out our problems and (I had hoped) repair our marriage. She took it with her to the City. I got by here in the Woods on my motorcycles and press cars (herd thinned recently as a result of GM hurling thunderbolts of politically correct outrage my way).

As part of our parting-ways, I offered her the truck to keep. She offered it back, on account of issues she’s having that make dealing with a clutch problematic. We came to an Understanding.

So, Silverbell (she named her) is back. 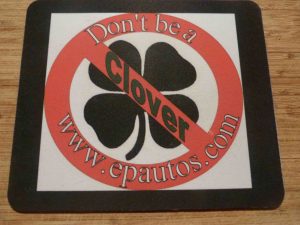 It’s not an El Camino – what is? – but it is a known good truck and that counts. I don’t have to sweat ugly (and probably expensive) issues rearing their head (like Putin) to plague me when I need hassle (and expenses) the least. I know this truck. I have been servicing it (her) for the past almost ten years now. She’ll get an oil change, fresh brake pads and some other little things. But should be good to go.

Still… Divorce Sucks. Especially when it’s not what you had in mind (and, I think, neither did she). When it just didn’t work out. But, who knows. Maybe down the road… .

Meanwhile, I have Silverbell. I can haul firewood again. A good thing, given it’ll be 8 degrees tonight here in the Woods. One big load from down in the field vs. multiple trips via wheelbarrow.

Also, I can go down to the City without losing fingers (and fertility) to the elements. That is a plus.

What else is News? 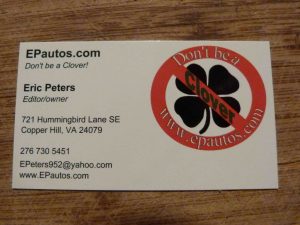 My Lions of Liberty podcast will be available shortly. Marc – the host – says it goes online the 19th. I have a review of the ’17 Camry coming soon. I like this car. It is a Millennium Falcon. Doesn’t look like much, but hauls the mail.

Also, another batch of mail goes out to EPautos supporters who’ve kicked in recently, including stalwart standouts LG and MB, among others. Thank you, guys!

Here’s a pic of the new bidness cards, too. Also a mouse pad prototype. Like ’em?

I think that’s all I’ve got at 5:18 this Thursday morning, wind howling outside and rattling the windows with icy cold fingers.

More to come as I think of it…