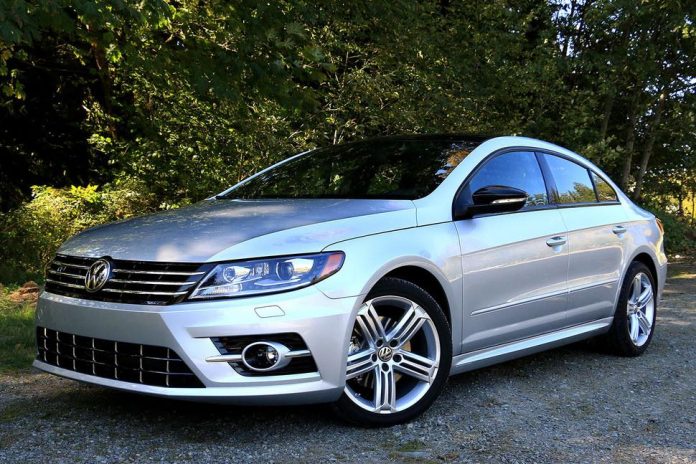 VW has tried this twice. Both good tries.

The problem – first with the Phaeton – and now with the CC sedan – has always been not enough cachet. . .

And a too-high price.

VW, after all, is Volkswagen. The people’s car. Both the Phaeton and the CC pushed that concept probably too far. Too close to Audi (the Phaeton) and the other not-so-people’s cars, like the Mercedes-Benz CLA sedan. Which is actually priced a couple thousand bucks less to start than the CC sedan. And costs only slightly more when ordered with AWD – which the VW no longer offers.

Especially because – like Titanic – the CC is a beautiful car.

You hate to see it go down. 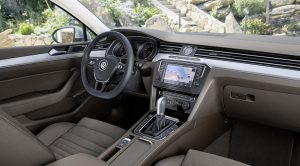 The CC – the letters stand for Comfort Coupe – is a sedan styled to look as much like a coupe as possible while still having four doors.

And usable back seats.

It’s based on the Passat – VW’s full size family car – so it has almost as much legroom in both rows – but it’s shorter overall and has sharply raked front and rear glass, giving it a much sexier profile, at the expense of some headroom. 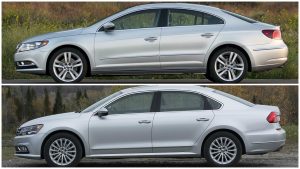 When it was a brand-new model back in ’08, the CC only had four seats inside – each a sport bucket, to enhance the personal car ambiance. But that proved a problem for potential buyers who needed to sometimes transport more persons, so the CC now has a conventional three-across backseat and can carry five.

Well, four comfortably. Plus one more not so much.

He gets to ride the center hump.

Still, this is one of the few “coupe-styled” sedans that has viable back seats – and that’s one of the car’s major draws. 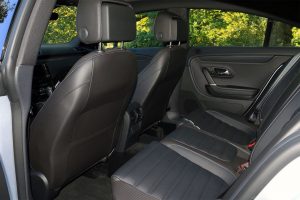 Unlike, for instance, the Mercedes-Benz CLA.

Which is gorgeous also, but much less practical because it has less backseat legroom than a Mustang GT, as a for-instance.

2017 is a transition year for the CC –  its final year. A replacement called the Arteon will take its place next year. 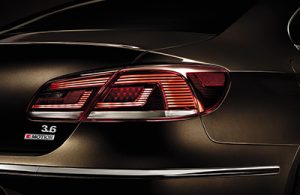 The previously available 280 hp V6 has been dropped from the options roster, along with the also-previously-available 4Motion AWD system. And the formerly available massaging seats. Probably because this version of the CC stickered for $44,355 to start (ten grand more than an AWD-equipped Mercedes CLA) and that was just a bridge too far for most VW shoppers.

On the other hand – and strangely, given the above – VW has also dropped the lower-cost Trend trim it offered last year for $31,570 (less than Mercedes wants for the base trim CLA and about what you’d probably end up paying to get into a well-equipped Camry or Accord – which are great cars but not the least bit sexy cars). It seemed like a good idea: Fix what what arguably the CC’s biggest sales gimp: a too-high price tag. 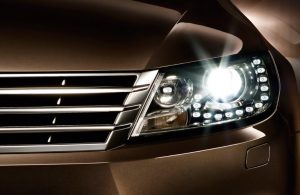 But – apparently – it didn’t do the trick and VW may have decided that cheapening the CC by trimming back some of the features and amenities wasn’t doing the car any favors, either.

Beyond this price-positioning conundrum, the changes for 2017 are mostly trim-related. The top-of-the-line R-Line Executive version, in particular, get a slew of new electronic features, including Lane Departure Warning with steering assist, Forward Collision Warning, Adaptive Cruise Control and Autonomous Emergency Braking.

Almost a foot more legroom in back than in the Benz CLA.

Expect to pay less than sticker for one.

Because it’s a VW. 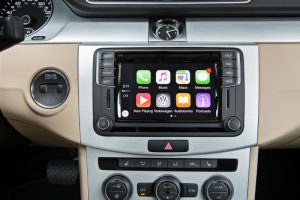 No optional engine – or AWD.

Dashboard/gauges very similar to lesser priced VWs like the Jetta.

Almost $35k – to start – is a lot to ask for a FWD/four-cylinder VW sedan – no matter how good it looks.

For its swan song year, the CC comes only with a turbocharged 2.0 four paired up with VW’s “direct shift” (DSG) six speed, dual-clutch automatic transmission and front wheel drive. The formerly availably 3.6 liter V6 and 4Motion all-wheel-drive system that were available previously have been dropped. 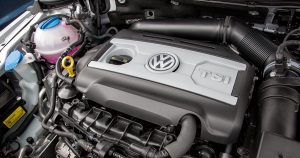 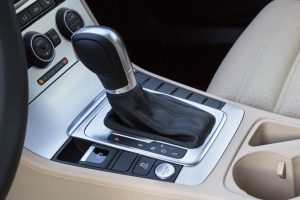 Like the Benz’s lower sticker price, this is odd.

The Mercedes costs less – and gets better gas mileage – than the VW.

Another bit of Weirdness is that you can get the same basic 2.0 liter engine that powers the CC in the much less expensive Jetta – where it makes more power (210 hp) and is designed to run on regular fuel.

In the CC, the 2.0 engine is a premium fuel engine. Which isn’t unsurprising given the CC’s premium car aspirations.

It’s just odd that the Jetta is available with a stronger version of the 2.0 engine.

Meanwhile, cross-shops like the Benz CLA are available with much more power (375 hp, in the CLA 45 AMG – which stickers for not much more than last year’s 280 hp 4Motion CC). 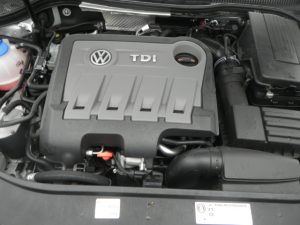 What’s really sad, though, is that you can’t get the excellent TDI diesel engine in a CC – at least, not in the U.S. In Europe, you can. Because their regulatory apparat isn’t as demented as our EPA – which has anathematized VW’s diesels over fractional differences in exhaust emissions.

Which means, less of the objectionable effluvia overall. 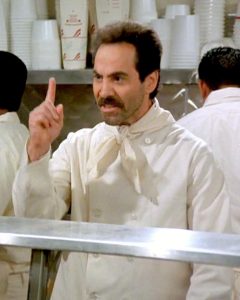 But tell it to Uncle.

VW was able to sell a TDI-powered Jetta for under $22k, sticker. It should have been possible to offer it in the CC for under $35k, paired with 4Motion AWD. (Which would have come in handy during my weeklong test drive; see snowbound image at the tail end of this rant.)

A TDI under the hood would have given the CC by far best-in-class-mileage – important to VW buyers – as well as luxurious gobs of low-end torque. More torque than the Benz CLA; not far off the torque made by the CLA 45 AMG. A diesel engine option would have also made the CC stand out almost as much as its visually arresting bodywork – because diesels are extremely scarce outside of prestige-badged (and priced) circles.

But Uncle stomped that possibility. As the Soup Nazi used to say (sort of) … No diesels for you! 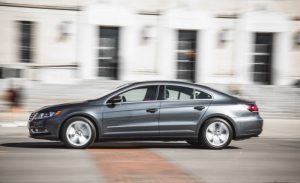 The 2.0 engine makes great sounds, has no soft spots in the powerband.

VW was among the first bread-and-butter brands to sell turbocharged gas engines that produced diesel-like low-RPM torque – achieved via new-design staged/”twin scroll” turbochargers that build boost almost immediately, with little to no lag. Direct injection and relatively high compression (for a turbocharged engine) help, too.

Whenever you need to go, the CC does. 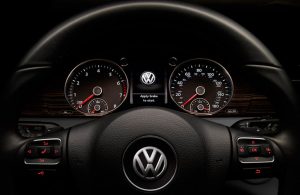 The problem for the CC is that right-now-boost/high-torque/DI turbocharged gas engines have become quite common. And not just in cars made by prestige-brands like Mercedes and BMW. Almost every major car company offers them, installing them in bread-and-butter/family cars like the Hyundai Sonata and Ford Fusion.

And, of course, VW’s own Jetta (and other VW models).

Buyers may notice this. 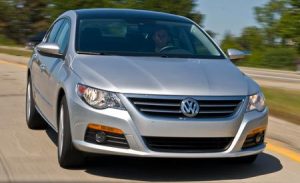 Consider the contrary example – the Benz CLA. The only way to get its engine is to buy . . . the CLA. Mercedes doesn’t sell the same basic engine in a lower-priced model. There is no Jetta analog; no sharing, no red headed stepchildren.

Most prestige brand players follow this example. Exceptions include Lexus – which sells a few models with engines that are half-sibs to those used in certain Toyota models. But it gets away with this in part because the Lexus versions are usually tweaked/tuned to make more power than their Toyota-installed half-brothers.

Some reviewers claim the CC isn’t much in the corners. Maybe they haven’t driven it. Or, they don’t know how to drive it. Some of the reviews you read are written by people who can’t drive stick. Many have never been on a track. Only a few can explain what “throttle oversteer” is, much less perform it.

This is more common than is generally known. 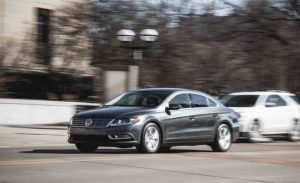 Like all VWs, the CC is more car than most Americans – and American car journalists – are shoes. If you know how to hotfoot, the CC won’t disappoint. It corners flat and tracks true. The four punches above its weight, or at least feels like it – pulling hard to its 6,000-something RPM redline before the DSG changes gears to the next highest. And – in Sport mode – the DSG box will delay that changeup until you’re off the gas and straightened up again.

Ease off the gas and enjoy the quiet, solid feel of this German car.

The problem is that the CLA will do much the same – and for less.

The Jetta GLI for much less. 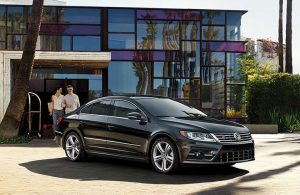 You’ve heard the saying, “she ain’t much to look at” – usually followed by some positive attribute to make up for that?

This one is a lot to look at.

Though it has some things unseen (and under the hood)  in common with Jettas and Passats, its bodywork is like nothing else in VW’s lineup. And looks can trump a lot. Ask any middle-aged guy who finds himself a hot 25-year-old girlfriend.

And this “25-year-old” isn’t entirely impractical.

In fact, it’s more practical than you’d expect – especially vs. the Benz CLA. 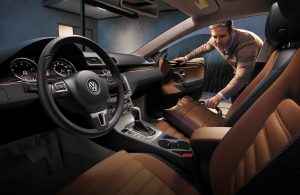 It, too, is a beauty. But it is best viewed from up front. In back, the Benz has only 27.1 inches of legroom – vs. 37.3 in the CC. To put that in some context, the Benz has four inches less legroom in the back than a Mustang GT (30.6 inches) which is an actual coupe.

The Benz’s four doors are for looks only.

But, the Benz has an interior layout that looks six figures – the centerpiece being a tablet-style LCD display mounted on top of the center stack, while the VW has a technologically up-to-date but Jetta-looking (and smaller) LCD screen built conventionally into the dash. 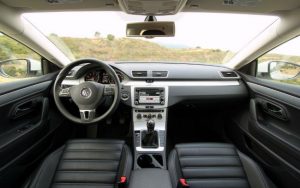 Even though the CC stickers for a couple thousand more than a cross-shop like the Benz CLA, odds are you’ll pay far less for the CC than you would for the CLA. And not just because it’s a VW and the other’s a Benz.

This is the last year before retirement – with an all-new replacement waiting in the wings. That one will have a jacked-up MRSP (at first) and dealers will be less interested in dealing while the newness is still crisp in the air.

But they will be eager to clear the deck of models like the outgoing CC, which is very good news for you, if you’re interested.

And maybe you should be. Here, after all, is a car that is supermodel striking in a segment wall to wall with Carly Fiorinas.

The CC may not be cheap as far as its sticker, but that’s not necessarily or even probably what you’ll pay. And other than the lack of AWD, it is a car that’s almost as practical for everyday driving and family car duty as a Camry or an Accord.

Which is something you can’t say about the Benz CLA. 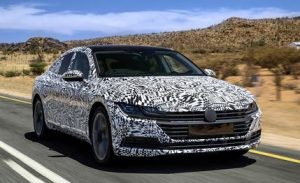 Given the Phaeton fizzle and the CC so-so, one wonders what the on-deck Arteon is going to be like. Is VW going to take a third swing at bat?

If so, give them credit for persistence.