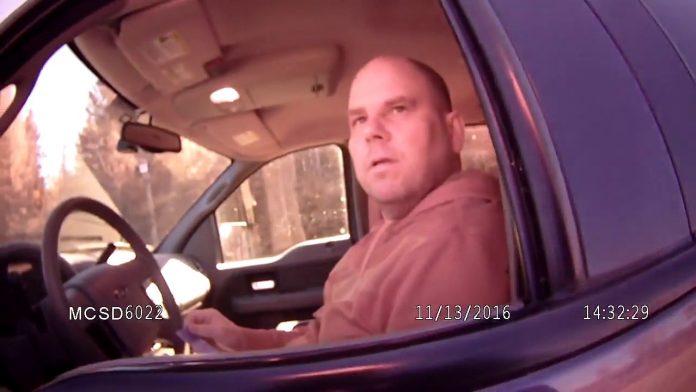 By now, everyone on the Internets has obviously seen the infamous viral video of Lt. Brian Filipiak from the Washtenaw County (MI) Sheriff’s Office being stopped for driving drunk. (If you somehow haven’t, the shortened video that was initially released is embedded below, along with the full, unedited 24 minute video)

Throughout that video, Lt. Filipiak acts indignant that another “hero” would actually enforce the law against a fellow “hero.” He asks Montmorency County Sheriff’s deputies who stopped him to “just let me go.” Filipiak even states at one point, when questioned about how he would handle such a situation in his own county, that he would in fact let another “hero” go if he caught them driving drunk.

The sense of entitlement and protection he expects to receive from a fellow “hero” is rather obvious from the start of the video when he purposely flashes his badge as he opens his wallet to retrieve his ID. Unfortunately for him, that little “secret handshake” didn’t work this time. Not surprisingly though, it turns out that there is a reason he had such expectations. Filipiak actually has a history of alcohol involved incidents, going back to at least 2013.

There is a record of law enforcement officers responding to his drunken escapades on at least two occasions, including one in which he was argumentative and, at least initially, refused to follow orders not to drive while drunk. In spite of that, not only was Filipiak apparently not disciplined in any way, but obviously he was promoted to the rank of lieutenant, which brings with it a leadership role within the WCSO.

Below are the descriptions of those two incidents, including excerpts from the police reports filed regarding them. (Courtesy of WashtenawWatchdogs.com.) In addition, video of the drunken domestic dispute call involving Filipiak’s wife (mostly audio) is embedded below.

On July 21, 2013, Sheriff Department’s Lieutenant Brian Filipiak drove to the Wayne County Airport to pick up his daughter but was so drunk and belligerent that his daughter refused to get into the car with him and hid in a back room of the United Airlines baggage claim office. The United Airlines employees called the Wayne Metro Airport Police to assist [1] .

Lieutenant Filipiak was drunk and uncooperative with the responding police officer. He refused to provide ID and stated “You won’t arrest me” and “You don’t know who I am, do you.”

Lt. Filipiak’s daughter called her stepmother and arranged for her to come to the airport and pick her up but she refused to pick up her husband.

Lt. Filipiak was still uncooperative with regard to arranging for a ride home from the airport.

In another incident that occurred on November 1, 2013, the Pinckney Police were called to Brian Filipiak’s home for a civil dispute with his wife. According to Lt. Filipiak’s statement [2] ;

According to his wife’s statement;

The couple agreed to separate for the night and no further disturbance was reported to police.

Video shows Filipak repeatedly asking to just be let go, but the Montmorency deputies weren’t having it (surprising usually they follow the rules of the thin blue line) and at one point, told him they would use a stun gun on him if he didn’t knock it off. The fact that they would use a taser on him when he wasn’t fighting but rather arguing shows how aggressive cops can be.

“Brian, I’m going to have you step out of the car and do some field sobriety tests,” an officer said.

Filipak was pulled over after deputies said they saw his car weave all over the road.

He pleaded with the deputies to let him sleep it off on the side of the road, repeatedly refusing to budge from his truck.

The deputy told him he had to get out of the truck now, but Filipak continued to refuse the orders and forced the deputies to pull him from his pickup truck.