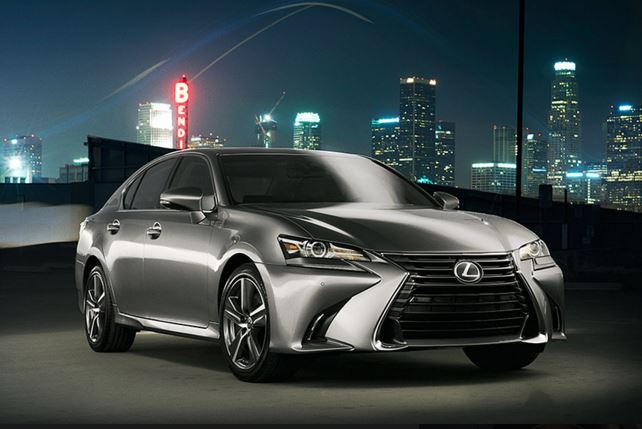 This whole business of the luxury sport sedan is kind of strange . . . like expecting Usain Bolt to block for the Giants.

World class sprinters tend not to be built like linemen.

Sure. It’s as simple as designing a fuel-efficient supersonic airliner that you can fly to Paris on for $500, round trip. Unlimited champagne included. 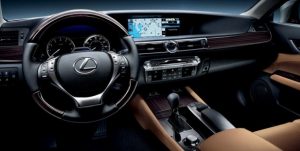 Good lord. I’m glad I only have to write about these things!

Lexus, on the other hand, built one.

The GS is Lexus’ Swiss Army Knife luxury-sport sedan. It can be – and do – many things. Several of them better – or for less – than rivals like the BMW 5, Infiniti Q70 and Cadillac CTS.

On the downside, this version of the GS – which is powered by a turbo four – isn’t available with AWD – which you can get with the turbo four cylinder-powered 5 series and also the Q70. 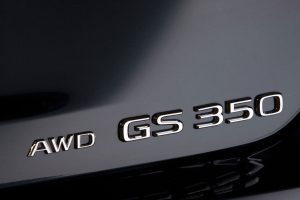 You can add AWD to the mix, too. 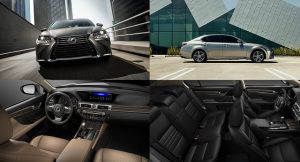 Lexus has priced the all-wheel-drive version of the GS slightly lower than the rear-drive version: $50,365 (that’s $330 in your pocket).

No one else does that.

But you can get the four-cylinder version of the CTS with AWD – and even though it costs $2k extra, the price so equipped ($47,995) is still a few thousand less than the least-expensive version of the AWD-equipped GS.

There is also a hybrid GS (reviewed here) as well as a V8-powered supercar GS F (which will be reviewed here later). 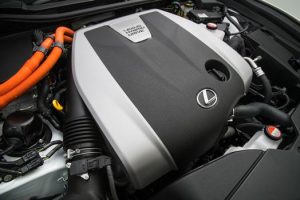 Both the GS 200t and the GS350 are available with a high-performance F Sport package that bundles 19 inch, 35-series “summer” tires in staggered sizes (the rear tires are larger) plus an Adaptive Variable Suspension with electronically controlled shocks, driver-selectable Sport S+ mode that dials in more aggressive throttle tip-in and shift points, high-capacity 14-inch, two-piece front brake rotors, racy sport buckets inside and a body kit on the outside.

Adaptive cruise control, automatic emergency braking and lane departure warning are now standard in all trims, including the base trim GS200t. F Sports with RWD are available with an electronically controlled limited slip rear axle. 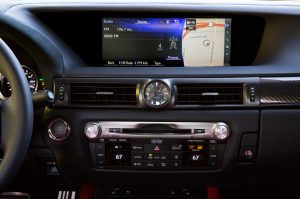 Even with very aggressive F Sport “summer” tires, it still rides like a Lexus.

Huge (12.3 inch) split screen GPS LCD display is very eye-friendly. Ergonomic mouse input is palm-friendly, too. And if you don’t like the mouse, you can change radio stations or adjust the volume via redundant knobs and buttons. 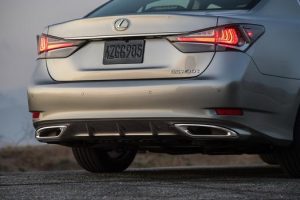 You can’t get AWD with the lower-priced four.

F Sport-equipped versions get lots of handling and appearance upgrades, but no engine upgrades.

Being a Toyota, you can’t turn the traction control off unless you stop the car first. 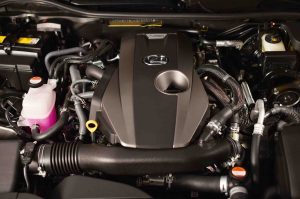 This version of the GS is rear-wheel-drive only.

So that’s as big as they make ’em.

Such taxes aren’t in force here – yet – but there are federal Corporate Average Fuel Economy (CAFE) fatwas to contend with and these smaller, turbo’d engines increase a manufacturer’s fleet average fuel economy numbers and by doing so, lessen the bite of “gas guzzler” taxes that would otherwise descend. 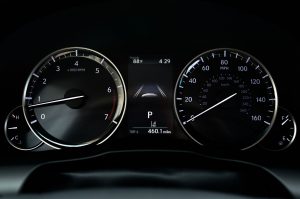 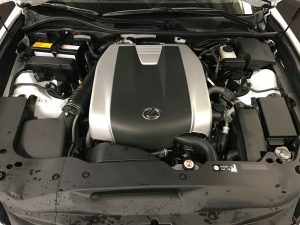 What if they are the same engine? One fed higher-octane gas, with the ECU adjusting spark and other such accordingly? What if hp and torque are measured higher up in the powerband?

Whatever its actual output, the 3.5 V6 evens things up. So equipped, the rear-drive GS gets to 60 in 5.5 seconds, dead even with the V6 Cadillac CTS (also 5.5 seconds) and slightly quicker than the six cylinder (straight six) BMW 535i (5.7 seconds).

The Infiniti Q70 is the Hercules of the bunch, with the largest standard engine of the bunch (3.7 liters) and the most horsepower of the bunch (330). But it still needs about 5.7 seconds to nail 60.

Gas mileage with the larger engine isn’t atrocious; in fact, it’s pretty good: 20 city, 28 highway for the RWD version. That is only 2 MPG in city driving and 4 MPG in highway driving less than the mileage managed by the 2.0 liter turbo. It’s a small price to pay for the GS350’s faster footwork.

Buyers note: If you buy the rear-drive GS350, you’ll get an eight-speed automatic. Models with the optional AWD system get a six-speed automatic – and 19 city, 26 highway.

The GS 200t is the sheep in wolf’s clothing.

Actually, that’s not fair. While it hasn’t got the straight-line forcefulness of the GS350, its cornering capabilities are just as high and – with less weight on the nose – it may even have the advantage. Just as the four cylinder versions of the Camaro and Mustang are better sports cars (at the cost of being lesser muscle cars) by dint of being lighter and better balanced.

The 200t also isn’t slow except in relative terms.

Though it’s not as quick as its GS350 bigger-engined stablemate (or its four cylinder-engined rivals) it is still quick enough to outrun almost anything that isn’t trying to match pace – and these days, such are few and far between.

What’s a shame is that Lexus doesn’t offer this one with a six-speed manual transmission – but then, pretty much no one else does, either. Cadillac and BMW used to but – as Inspector Clouseau used to say – not anymore. 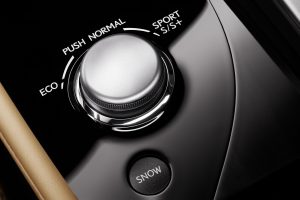 You can, however, get the F Sport enhancements – and if you like to drive, you should get them. Particularly as an addition to the 200t. You just saved about $5k vs. what you would have spent to get into a base 528i or Infiniti Q70. Why not spend it on the F Sport stuff? The ultra-performance 35-series tires may not last long – but the memories of Good Times will.

You’ll also get the well-worth it adaptive suspension, including an additional Sport+ setting that dials up the most aggressive shift characteristics (including rev-matched downshifts) and throttle response. 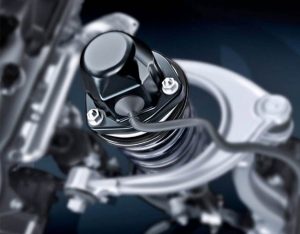 You decide which setting you’d like by rotating a knob on the center console – left for ECO (dash glows blue) right for Sport (dash glows red). Normal is the default setting. Push the rotary knob down to engage. There’s a smaller button for Snow mode (and second gear starts, to improve traction on slick surfaces) behind the main controller knob.

There’s nil high-speed lean; the car holds the line stubbornly, right up to the point at which the tires begin to break traction – and even then, just keep on the throttle to keep the car on track. 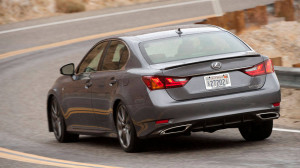 The gear-holding (and throttle-blipping) automatic is your new best friend when tackling downhill curves.

Like other AI automatics, this box has a learning algorithm that monitors your driving; the faster your pace, the more aggressive its shift characteristics become. There are manual F-1 style paddle shifters if you like to play that way – but the computer really does know best and it’s much faster than you are, besides.

But the really cool thing is that even with the F Sport’s inch-high sidewall “summer” tires and the most definitely sporty steering sharpness and no-lean cornering, the thing still rides like a luxury car. 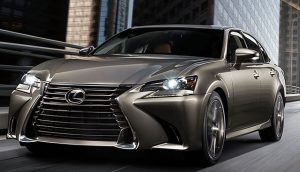 Dual “wind sweeps” shoot backward over the hood from either side of the big Lexus badge – and the even bigger “spindle” grille that is Lexus’ new – and can’t miss it – Corporate Look.

From the side and rear, the overall package is still pretty low-profile, though. It does not call as much attention to itself as something along the lines of the CTS, which has lines (and folds and angles) everywhere.

Trunk space is about the same in all of them: 14.3 cubic feet in the Lexus vs. 14 in the BMW, 14.9 in the Infiniti and 13.7 in the Caddy. But the Lexus has less usable cargo capacity because its rear seat backs do not fold forward.

On the other hand, the Lexus mouse controller is really neat – and unlike anything else.

The design is brilliantly ergonomic. There’s a padded palm rest on the console, with the mouse right at your fingertips. Up or down, left or right – then push to select what you want. There’s just enough drag built in to give you precise control of the pointer, even when the car is moving. 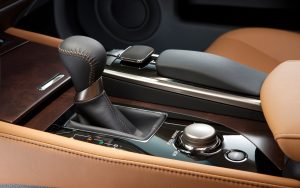 And there are secondary/redundant knobs for things like adjusting the radio – a handy fallback as well as something that reduces the learning curve to a small hillock.

Ease of use is further improved by the oversized LCD display, which is recessed to cut down on sun glare.

A lengthy suit of high-tech options is also available – everything from a heads-up display (HUD) to  automatic self-parking. There is also Lexus’ Enform concierge technology, which works with and through your Smartphone. 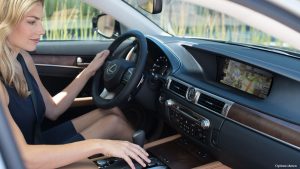 But what’s expected in a Corolla or a Camry shouldn’t be found in a car like the GS – especially the F Sport version. 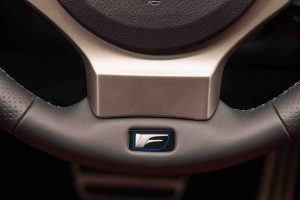 The Park Assist system can be similarly over-protective. It beeps at you when you get close to anything. This can be annoying. Examples include the drive-through window at the bank. Narrow lanes, you’re forced to get pretty close to the building or the little kiosk that houses the vacuum tube delivery system for your deposit slip. The car beeps frantically even though you’re in zero danger of striking anything. You are, after all, stationary. And there it goes again, when you roll up too close (for the computer’s comfort) behind the car ahead at a light.

The system can be adjusted for distance but seems to want a grandmotherly several feet of clearance between you and whatever. Now you know why you can’t get to the left turn lanes anymore. The air gaps between cars waiting at lights are increasing such that six cars in line now take up space that could (and should) accommodate eight without anyone’s bumpers actually touching. 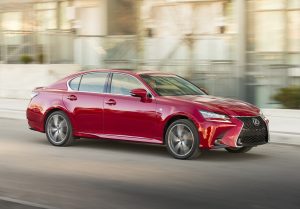 On the other hand, it’s a big plus that you can buy this thing with AWD for less than it costs with RWD – and for several thousand dollars less than the cost of a 5 Series or Q with AWD.

It’s a linebacker than can run. Or a supersonic flight that’s affordable. What’ll they think up next?

Snow that’s not cold and wet?