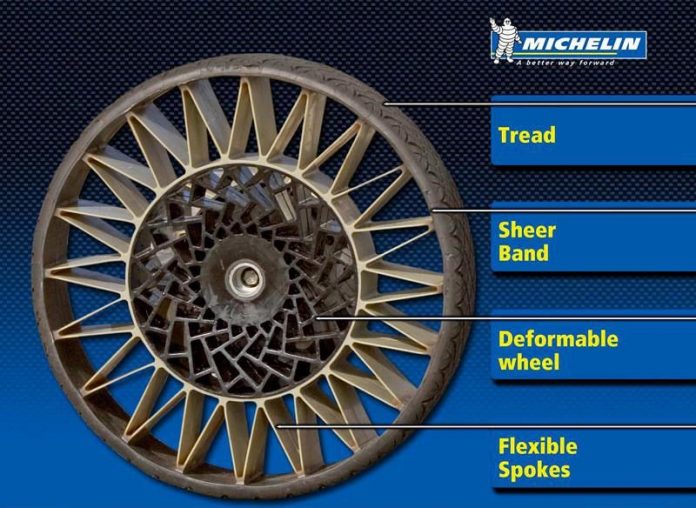 You can’t inflate it – and you can’t puncture it. It always runs flat. Potholes don’t faze it – and there’s no possibility of bending the wheel because there isn’t one to bend.

That’s the hype for the non-pneumatic tire (NPT) and wheel – an integrated assembly made of a flexible polyurethane material formed into a spoked/honeycomb-like lattice around a central hub. The wheel/tire combo can deform with road imperfections and eliminates even the possibility of a flat tire, as well as the need to worry about keeping track of air pressure.

Some lawn mowers, golf carts and commercial equipment such as skid steers already have NPT tires – and the military uses them on rough terrain and in hostile conditions, where a flat tire can be more than just a hassle.

Resilient Technologies makes them for the latter – and Michelin (“Tweel”) Hankook (“i-Flex”) Bridgestone, Yokohama and other major players in the civilian tire business are developing them for possible use on the cars the rest of us drive.

Maintenance costs would be lower and – in theory – the hassles associated with conventional pneumatic tires (including government-mandated tire pressure monitors that often don’t work) would be things of the past.

It’s an intriguing idea – and it might could work –  but don’t throw away your can of Fix-a-Flat (or spare tire) just yet.

According to Jacques Bajer, a tire engineer who helped to develop the low aspect ratio (short sidewall) tires that are common on cars today and who holds numerous patents related to tire design, NPT tires might not holdup as well in the real-world driving conditions that passenger cars – as opposed to golf carts, lawn mowers, skid steers and military vehicles – have to cope with. 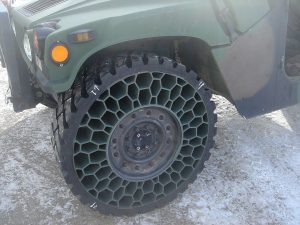 Bajer says the elastic spokes that support the car (in lieu of the air inside a pneumatic tire) could degrade more rapidly over time, as a result of extended high-speed use as well as exposure to the elements. They could also be affected by extremes of heat and cold in ways that pneumatic tires aren’t.

A major potential worry is physical damage to the spokes – which could unbalance the wheel/tire combo. Foreign material such as packed snow or rocks/road debris could get lodged in between the spokes, which could result in vibrations and noise and possibly weird, even dangerous handling/braking characteristics.

No one really knows how long NPT tires would last, either.

Conventional all-season radials often go 40,000 miles or more. For about $100 or so each. An NPT tire would have to match that – and for about the same money. 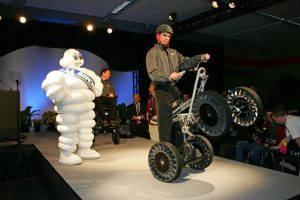 But the biggest obstacle to NPT tires (and wheels) may be that they are severely ugly. Even if all the technical and economic issues are resolved, will buyers cotton to these things? Would you? Have a look. It’s like mounting cat scratchers on your car.

So why the sudden interest – by so many major tire companies?

Because of the environmental angle.

Hankook’s i-Flex NPT tire, for instance, is said to be made of “Eco-friendly” materials designed to be easy to recycle. It’s also touted that less oil (which goes into conventional rubber pneumatic tires) would be used and thus, Gaia smiles.

But – as is frequently the case with anything “environmentally friendly” – the price isn’t being talked about very much. 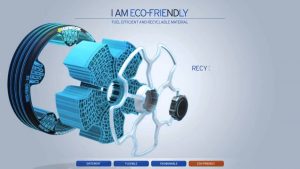 Well, to tire buyers it does. Maybe even more so than looks.

People will buy an ugly car. . .  if it’s a good car. And even more so if it’s an inexpensive car. But an ugly – and expensive – NPT wheel/tire? That might be something only a government bureaucrat could love.

What if the bureaucrats mandate or otherwise government-push (as via subsidies and other “incentives”) NPT tires onto the market before they are functionally or economically viable – and notwithstanding that they are harder-on-the-eyes than a close-up view of Hillary Clinton’s face – in the name of “environmentalism.”

This sort of thing is not unheard of.

Once government decides something is good for us, it often ends up being forced on us.

And that includes the bill.