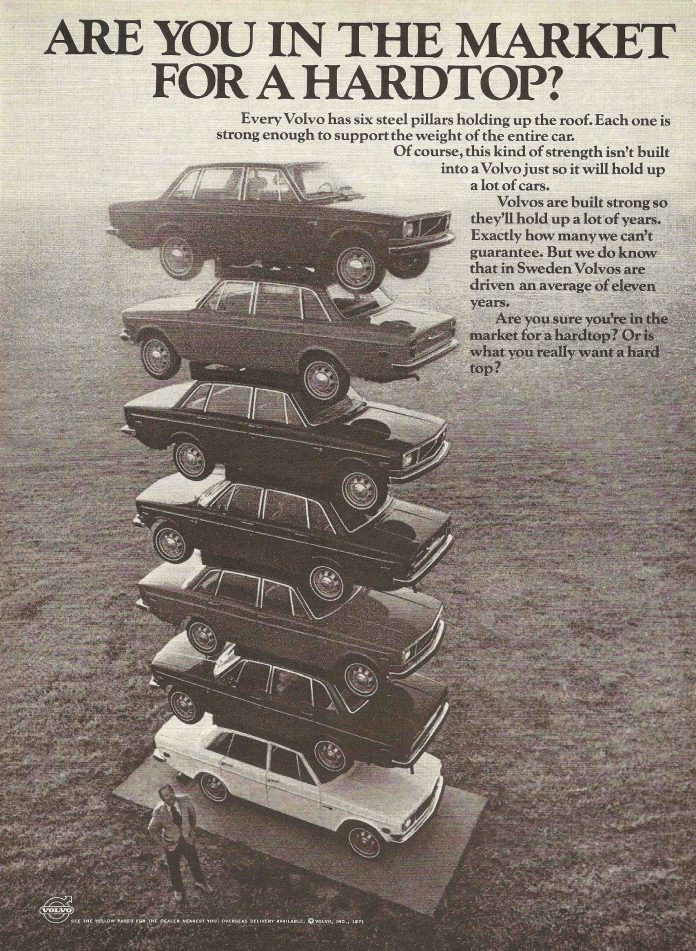 Volvo – the famously Swedish car company now owned by the Chinese – was famous once upon a time for the crashworthiness of its vehicles. You may recall. They were built heavy and boxy, specifically designed to withstand rollovers (the roof would support the weight of the car) and to be survivable in wrecks that would probably not be in lighter, less sturdy cars.

They were also stodgy and (generally) not speedy – things esteemed by parents of first-time teenaged drivers.

Volvo sold safety – and it sold very well. It built the company.

But now all cars are Volvos.

“Safety” is everywhere – because the government requires it. All cars must have roofs capable of supporting the weight of the car if it rolls over. They must have a half dozen airbags, back-up cameras and tire pressure monitors; they are subjected to frontal, side and offset barrier crash testing which they have to pass. It is why all new cars have bulbous, up high butts and (generally) less glass and more metal surrounding the interior “bathtub” of the passenger compartment. 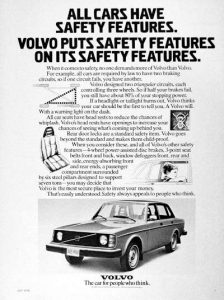 And it’s the major reason why most new cars look mostly the same – from the side in particular.

This of course is a problem for Volvo – which must now try to sell something other than “safety.”

So Volvo is trying to build cars more like those sold by BMW, Lexus, Mercedes and other high-tier brands, which Volvo aspires to. They sell style and sex appeal, tech features and performance.

“Safety,” too – but it’s way down the list of major touts. Because it’s become a given.

Volvo is also returning to wagons – which the company used to sell a lot of when other brands weren’t selling any (or very few). Now they are selling them, too.

It’s a much tougher room.

Maybe they’ll make it – maybe not. But it’s interesting to note that it wasn’t necessary for the government to force car companies to sell “safe” – that is, crashworthy – cars. This is a common misconception, not unlike the superstitious belief of a rainforest savage that if he fails to kowtow before the totem pole, the sky god will be angered and the rains will not come. 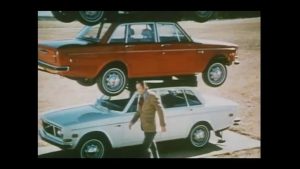 No one made any hay selling “unsafe” cars.

But there was a buyer demographic that particularly esteemed crashworthiness more than other criteria and Volvo catered to that demographic while other brands focused on things like sexy looks or high performance or low price or high mileage.

Today, everyone knows that every new car is “safe” – which kind of blurs Volvo out.

But “safety” is a a relative thing – even today. A ’70s-era S-Class Mercedes is still a safer car to be in than a brand-new Smart car. And a brand-new full-size (and heavier) car is still generally more able to  protect the people riding inside than a smaller (and lighter car) even though both meet government “safety” requirements.

And notwithstanding that both may carry a “Five Star” crash rating. 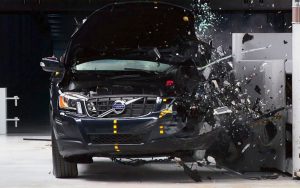 But the “if” is italicized for a reason.

A crash may never happen – in which case the car’s crashworthiness is irrelevant. And what factors play into that? Things like visibility and maneuverability – things that may be and often are compromised by the “safety” mandates spewed by the government! 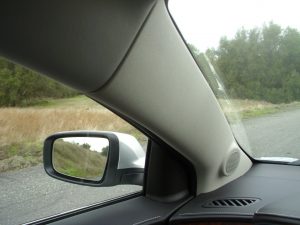 For example, the mandate requiring that a car’s roof be capable of supporting the car’s weight without collapsing if the car rolls over. This has resulted in roof pillars that are much thicker than was common before the mandate. These often markedly decrease visibility – to the side especially – making it more likely that the driver will inadvertently pull out in front of a car he did not see coming.

Now you get to test out the car’s side-impact crashworthiness.

Similarly, all new cars have very tall seatbacks and headrests – to comply with anti-whiplash requirements. But they obstruct the view rearward – making it more likely you will back up into something. 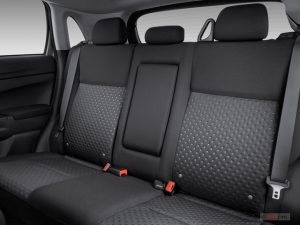 Which is “safer”? The car you can see out of? Or the car that protects you better in a crash you’re now more likely to have?

The government is obsessed with crashing. Every new “safety” mandate is reactive; how will the car deal with the forces imparted when it hits something. The assumption being that it will.

Maybe it would be better to obsess about avoiding crashes?

And – even better – how about letting the market (and car buyers) decide for themselves whether it’s better to have a more crashworthy car…  or a car that’s less likely to crash in the first place?