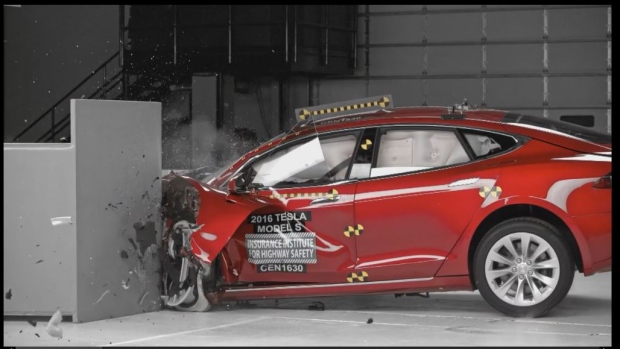 For a vehicle to qualify for the Top Safety Pick award, IIHS said it must earn “good” ratings in all five crashworthiness tests – small overlap front, moderated overlap front, side, roof strength, and head restraints and seats – and come with a front crash prevention system that earns an advanced or superior rating.

The “+” is awarded to vehicles that meet all the above criteria and come with “good” or “acceptable” headlights.

Ratings for crashworthiness and headlights are good, acceptable, marginal and poor.

IIHS also noted the 2017 Model S isn’t available with anything other than poor-rated headlights. The automaker told IIHS that it is working with its supplier to improve the headlights. IIHS will evaluate the new ones when they are available.

One Model S variant in particular, the high-performance P100D, was also dinged for its roof strength. The P100D has the same roof structure as other Model S variants, IIHS said, but noted that because the car has a larger, and heavier, battery it earned only an acceptable rating for that test.

IIHS plans to test the latest EV to enter the market, the Chevrolet Bolt, once it becomes widely available this year.

Reader Question: Topping Off Only?