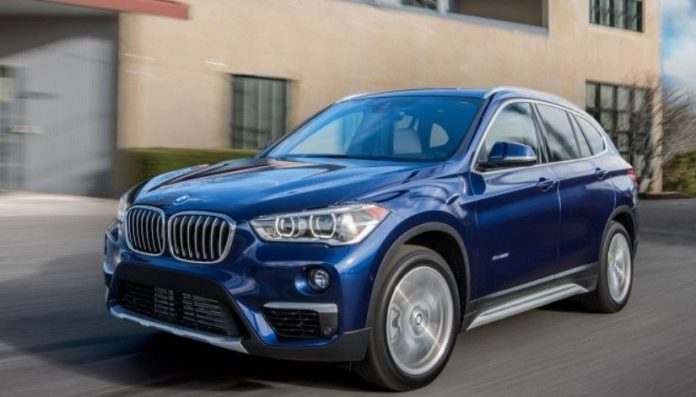 Well, size can be deceiving.

The BMW X1, for instance.

It is BMW’s smallest crossover SUV but it has about the same (slightly more, actually) interior space as the significantly larger-on-the-outside BMW X3. Which is . . . weird. Given the X1 is supposed to be BMW’s entry-level crossover SUV. 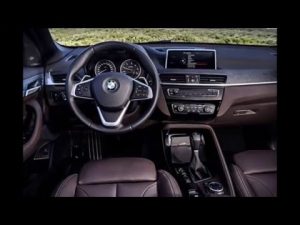 Even weirder, the X1 is just as quick.

And, it costs less.

Okay, so what’s the catch?

The X1 is a two-row, entry-level luxury crossover SUV that’s technically in the same class as the Audi Q3 and the Lexus NX200t, but because of its unusually spacious interior – including cargo capacity – it could also be considered an in-house rival of its bigger-on-the-outside brother, the BMW X3.

Acura’s RDX is another possible cross-shop, but it’s significantly larger on the outside, too. 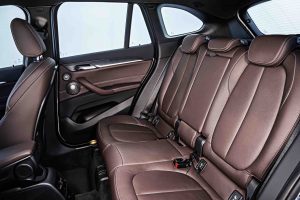 The Acura RDX – which is the only compact-ish luxury crossover still powered by a big V6 instead of a turbocharged four – stickers for $35,570 to start with FWD; with AWD the price rises to $37,070.

And there’s your catch.

Unlike the X3 – and like its immediate rivals – The X1 is built on a front-wheel-drive layout; in fact, it’s the only current BMW vehicle that’s not built on a RWD-based layout. 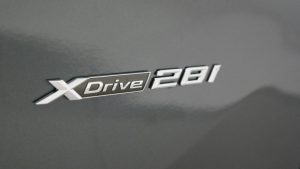 This year, both FWD and AWD versions of the X1 are available; last year’s X1 was sold only in AWD trim and at a higher price ($35,795 to start).

Smaller outside than the X3 but just as roomy on the inside. 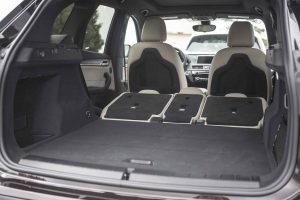 Quicker than rivals – including the stronger-on-paper V6 RDX.

Nil rated/published towing capacity. The X3 – which is available with a high-torque diesel and is also rear-wheel-drive-based and so more rugged, can pull 3,500 lbs.

Like BMWs generally, the X1 can get Xpensive when optioned out. My test car X1 had almost $15,000 in optional equipment and stickered for more than $50,000. 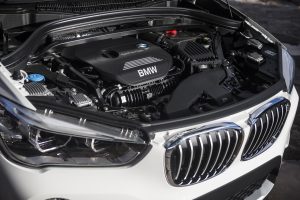 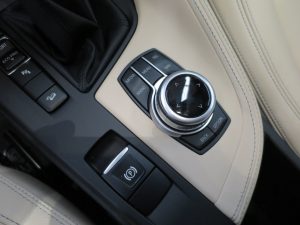 An eight-speed automatic is standard with either the FWD or the AWD-equipped version of the X1. Shift character (firmer or softer) and throttle tip-in (sharper or more gentle) can adjusted via three driver-selectable modes: Comfort, Sport and Eco.

It’s worth mentioning that the FWD X1 is superior to the RWD X3 in bad weather. In a FWD vehicle, the weight of the engine/transmission are located . . . up front – and over the drive wheels. The extra weight pushing down on the drive wheels helps traction.

And it is better to pull than push when it comes to driving in snow.

Meaning, you don’t have to buy the AWD system for the X1 in order for it to be a snow day-viable vehicle. 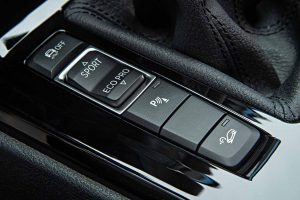 Like the X1, it has a turbocharged 2.0 liter four, and its 200 hp rating doesn’t sound too far off par. But the Audi – which is also heavier than the BMW by about 140 pounds – takes almost eight seconds to get to 60, a borderline not-acceptable run for a vehicle with a $30k-plus sticker. When you pay that kind of money, you ought to be able to out-accelerate $15k Corollas. 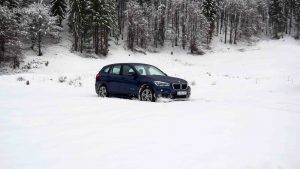 The Lexus NX200t falls in between the two.

The Acura RDX presents the greatest performance threat to the X1. It has the most engine in the class – a 3.5 liter, 279 hp V6 – but it’s bigger and heavier and so not quite as quick as the X1.

But it is much quicker than the Audi and the Lexus.

EPA says 20 city, 28 with FWD and 19 city, 27 highway with the optional AWD system. For a V6, those numbers are actually very good – and they’re not bad vs. the mileage numbers posted by the turbo fours in this class, either.

The RDX is also rated to pull up to 1,500 lbs., so you won’t maul your warranty if you hookup a small trailer and something breaks. 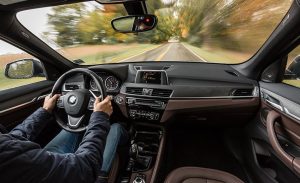 If you want speed – and traction – without the size and the expense –  the X1’s got you covered.

It is, first of all, the quickest thing in its class – and then some.

I have always been suspicious about BMW’s advertised horsepower numbers. This X1 fuels my suspicions because it is awfully quick given “228” horsepower. Go back a couple paragraphs. The Acura RDX has almost twice the engine (3.5 liters vs. 2.0) and a rated 279 hp – that’s a 51 hp on-paper advantage – but it’s still a few tenths behind the X1, 0-60.

But, maybe it’s not a horsepower fudge. 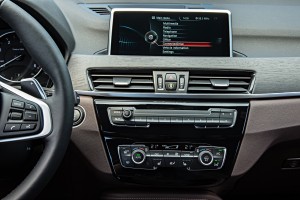 It’s the difference between Right Now and Wait a Second (or two). Keep in mind that it’s chiefly torque rather than hp which gets a vehicle moving, especially if it has an automatic transmission. And these new turbo fours make big torque almost right away.

Regardless, the X1 goes – that’s the thing to know. 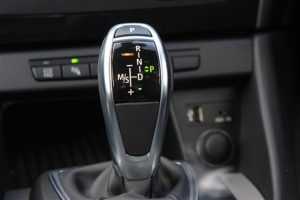 Some small-engined rides have trouble in this department. That includes the Audi Q3 and the X1’s bigger (on the outside) brother. It’s not slow, but it probably ought to be quicker than the X1 given how much more it costs.

The Audi Q3 does ok entering the curves but coming out of them, you’re pretty much sailing on the inertia; push the accelerator and not much happens. 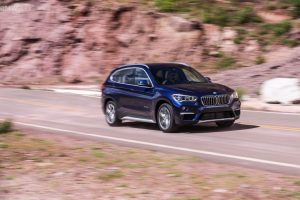 The Lexus is better in the acceleration department – but it’s not as good as the BMW, laterally or otherwise.

And yes, even though the X1 is built on a FWD layout.

Especially when ordered with AWD, which equalizes both weight balance and power delivery.

The X1 also sits lower – and weighs less – than the nominally “sportier” (because RWD-based) X3. Those are also assets when cornering.

Try one. See for yourself. 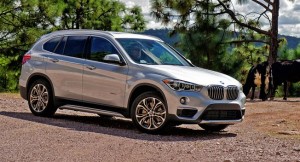 Usually, the catch with a physically smaller overall vehicle would be cargo capacity – as it is with the Lexus NX200t.

The Lexus is nearly as long overall as the X3 and while it has a bit more front seat legroom (42.8 inches) than the X1, when you pop the liftgate, all you’ve got to work with behind the second row is 17.7 cubic feet of space. The X1’s got 27.1 cubic feet of space (virtually the same amount as its bigger-on-the-outside brother, the X3, which has 27.6 cubic feet of space).

The Audi Q3, meanwhile, is the stubbiest of this group – just 172.8 inches long overall. 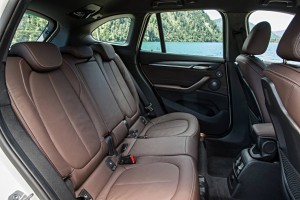 The take-home point is that the X1’s the most space-efficient of the bunch.

In addition to room, inside you will find a really nice cabin that compares favorably to much-pricer BMW stuff. I test-drove the new 7 Series sedan the week before I test-drove the X1 and the $35k-ish X1’s interior layout was – to me – 90 percent as sharp as the six figure Seven’s, with the main differences being an analog vs. LCD main gauge cluster and the dashpad in the X1 wasn’t stitched leather. But otherwise . . . well, go have a look yourself. 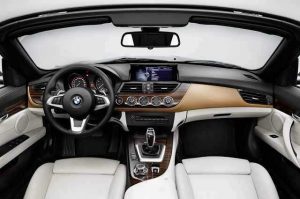 The secondary LCD cluster is almost identical, just a little smaller and the center console has a near-identical rotary/push-button mouse and the wood inlays are… really nice.

Also, nice: Redundant secondary knob controls (and wheel controls) for the audio system and some other functions; so you don’t have to go through the mouse, unless you want to. Handy underseat (and out of sight) storage cubbies. Top-drawer three stage seat heaters that you could probably percolate coffee on.

While there is just one X1 trim, there are many options – among them a Technology Package ($2,550) that upgrades the iPad-style LCD infotainment screen from 6.5 to 8.8 inches and gets you all the latest smartphone apps. The Premium Package ($3,250) bundles a full-length panorama sunroof (fixed glass but moveable privacy screen), interior ambient lighting, LED exterior lighting and a hands-free/automatic opener for the power lift gate out back. 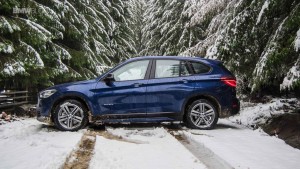 There are no drivetrain options but you can order up even better handling via the M Sport package ($2,450) which upgrades you to high-performance 19-inch Summer tires (18×7.5 inch wheels and all-season tires are otherwise standard) and a firmer-riding suspension, along with M Sport exterior and interior trim. Be aware that the Summer tires are not the hot ticket for winter driving. Even with xDrive all-wheel-drive, the X1 is not going to get far on them if there’s snow on the ground.

You also lose a little clearance (7.2 inches with the standard wheels/tires) if you opt for the Sport package. A lower stance is good for handling but not so good for fording through unplowed snow.

On the other hand, an optioned-out X3 would cost even more . . . and would take up more room in the garage without being any roomier on the inside. 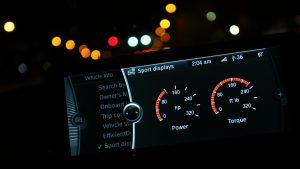 While playing with the gadgets, I discovered a clue about the true output of the X1’s 2.0 liter four.

This BMW – like all current BMWs – features an LCD Sport display that shows you how much horsepower and torque the engine is making at any given moment, as you drive – with the peaks pegged by little markers. The horsepower gauge in the X1 I test-drove pegged at 240 under wide-open throttle, which just happens to be exactly the same as the 2.0 engine’s rated output in the X3.

My bet is both 2.0 engines are identical – and make the same 240 horsepower – but BMW advertises the 2.0 engine in the X3 as being stronger for the obvious reason that the X3 is more expensive and people expect to get more when they pay more. 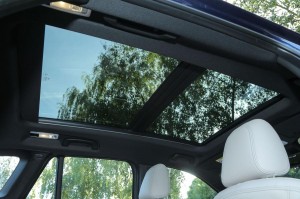 The X1’s second row can be moved forward and backward, as well as fold flat. This little-on-the-outside BMW can haul home bigger loads than you’d think.

The paint quality everywhere is superb. Even the underside of the hood is clearcoated; a lot of other car brands skip that to save a couple bucks per car.

Unfortunately, the Adaptive Cruise control – a useful feature that automatically adjusts the X1’s speed in relation to the ebb and flow of traffic – is bundled with an $850 Driver Assist Plus package that includes not-really-useful electronic nannies such as an automated parallel parking system and automated braking/collision mitigation with pedestrian detection. 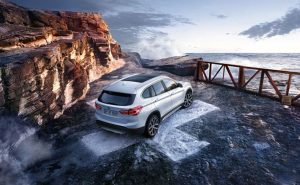 This is not a clunky, cumbersome plus-sized vehicle with lots of blind spots that’s awkward to maneuver. If you can see – and know how to drive – you can save money by skipping the Driver Assist stuff.

But it’s a shame you can’t buy the Adaptive Cruise al la carte.

The typical crossover SUV is an appliance that’s mostly about hauling people and cargo, not ass.

The X1 does all three.

For less… if you’re careful with the options.

It’s the pick of the litter in its class – and even outside its class.