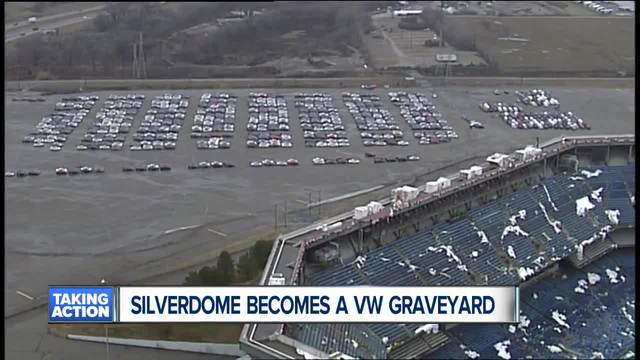 Thousands of “cheating” VW diesels bought back from their former owners sit ruefully outside the Pontiac Silverdome in Michigan.

The Silverdome, the former home of the NFL’s Detroit Lions and host of countless monster truck shows, is in violation of Pontiac’s building and safety codes, zoning ordinances and municipal code, in part for the storage of used cars on the lot, according to charges filed this week.

The complaints, first reported by the Oakland Press, were filed against Silverdome owner Triple Investment Group, based in Detroit, in the 50th District Court of Pontiac.

One of the zoning ordinance violations includes not having the necessary permit to park or store vehicles on the outside of a building.

Thousands of VW and Audi models with diesel engines are being stored on the north and west parking lots of the stadium in Pontiac, north of Detroit. Each vehicle is tagged: “This vehicle not for sale.”

VW said it is confirming with its “service provider” that all permits which allow the vehicles to be stored at the Silverdome are up-to-date, per their contract.

“We have not admitted responsibility to any of the citations,” said attorney J. Patrick Lennon, a partner at Honigman Miller Schwartz and Cohn, which represents Triple Investment. “We recognize the city’s positions and have been actively working with them. At this stage, we are both currently trying to reach across the table rather than pound on it. We hope a resolution can be reached in the near future.”

As part of a sweeping settlement with U.S. regulators over widespread emissions violations, vehicles equipped with VW’s 2.0-liter TDI diesel engines have been repurchased from owners, removed from dealerships and stored at regional sites.

“These vehicles will be held and routinely maintained until it is determined whether an approved emissions modification becomes available,” VW said in a statement. “If approved, the settlement allows Volkswagen to modify affected 2.0L TDI vehicles so they can be returned to commerce or exported.”

Vehicles which aren’t modified will be crushed.

The company said it’s removed about 25 percent of 475,000 2.0L TDI vehicles from the road in the nearly fourth months since the buyback program began.

VW pleaded guilty this month to felony counts of conspiracy, obstruction of justice and introducing imported merchandise by means of false statements for its emission-cheating devices.

Seven VW executives have been indicted because of the emissions violations.

Reader Question: Your Shoulder – My Back?