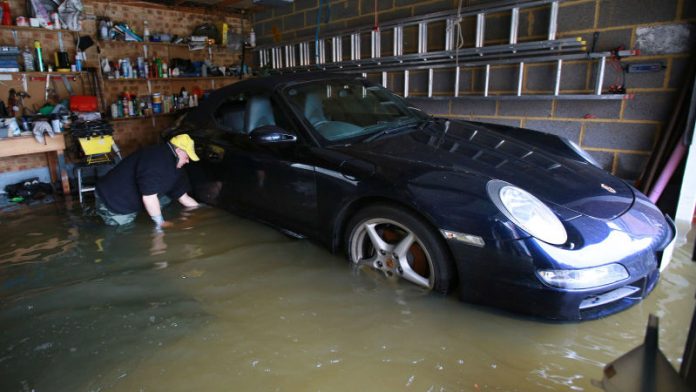 You’ve heard the saying – if it ain’t broke, don’t fix it? True enough. But there are also things you can’t fix once broken. The car will never be quite right again – and may be a lot wrong.

This has always been a killer; a water-logged interior almost inevitably means a soon-to-be-moldy interior. Carpet and insulation sops up the water, wicking it up into places that are dark and not well-ventilated. If areas like the interiors of door panels, the underside of the roof, the trunk and so on that aren’t supposed to get wet do get wet, they often rust out quickly, too. And with late-model, computer-controlled cars that have lots of electronics, there is the additional problem of corroded connections and moisture penetration of electrical parts that lead to endless “little problems” that end up becoming big expenses and a constant hassle. 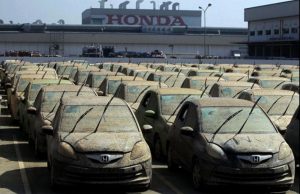 Short of gutting the entire interior – an even bigger expense and hassle – it is almost impossible to truly get back to where you were, before the car went for a swim.

This is why water-damaged cars are often title-washed, then patchouli’d with New Car Smell (to cover up the mold smell) and sent to a different part of the country and sold to unsuspecting suckers.

How to avoid: Running a CarFax or similar title check may uncover evidence of title-washing but it’s not foolproof. Your eyes – and nose – are at least as valuable as far as sussing out a once-wet car. 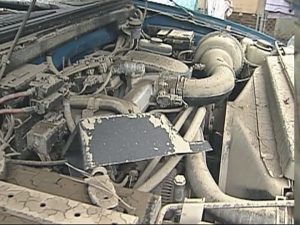 Look for signs of discoloration inside the car, especially door panels, carpets and the headliner. Pop the hood and look a the underside as well as the engine. If you see mud, not splattered but uniform, it is a Bad Sign.

Put your hand under the seat and feel for dampness. If you can, get on your back and – with a flashlight – look up under the dash, from the area near the brake and gas pedals.

If the car was under water, you will see evidence of it here in the form of rust on exposed metal parts and discoloration of insulation. Stick your fingers in the AC and heat vents; if they come out sticky, you may have a problem. Drive the car with the windows up; if the interior glass begins to fog almost immediately, it is indicates a Moisture Problem.

If the car smells musty, it is a Bad Sign. Assume it’s a an ex U-boat and move on to the next candidate.

The mighty German battleship Bismarck was laid low by a lucky (for the Brits) hit to a vulnerable area – her rudders. Though the rest of the ship remained fully operational, her 15 inch guns just as lethal – with her rudder jammed to port, she was a sitting duck for the British fleet because all she could do was steam in circles.

Cars are similarly vulnerable. The parts that are welded together into a single piece – the unibody – are not easy to fix once damaged. Especially modern unibody cars, which are welded together by robots at the factory, to extremely close tolerances. When one gets rear-ended after it leaves the factory, the doors – or the trunk – sometimes never quite close right, even after they’ve been “fixed.”

Or, they squeak and rattle. 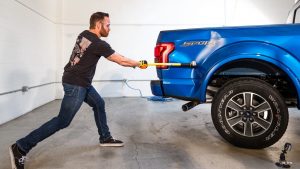 Sometimes, they leak, too.

The most vulnerable parts are the rear quarter panels (the areas above and behind each rear wheel), the door frames (the doors themselves unbolt easily and can be replaced with new doors, if need be) and the rear end of the car.

A new problem is aluminum unibody vehicles – like the new Ford F-series trucks, for instance. Many other vehicles (e.g., new BMWs, Teslas, Jaguars) make extensive use of aluminum panels, too. Aluminum is light and strong – but it is also more difficult (and so, expensive) to weld back into shape. Once bent, it may not be fixable – or at least, not economically fixable.

You may want to take this into consideration before you buy an aluminum-bodied vehicle. 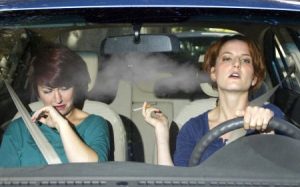 Once a car has been smoked in, it will always smell like an ashtray – even if immersed in patchouli.

Be especially wary of any used car you’re looking at that does smell as though it has been immersed in patchouli. They do this to mask the underlying cigarette stink but all it does is combine the two stinks into a new, even worse stink. The patchouli stink will eventually dissipate, but the smoke stink won’t – no matter what you do.

This is why smoked-in used cars are always worth about 10-20 percent less at trade-in time than an otherwise identical but never-smoked-in car. If you smoke, you may want to consider that before smoking in your next new car. 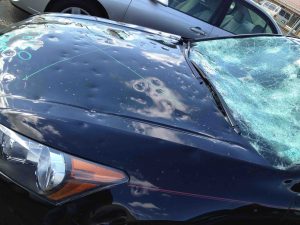 This one’s not a functional issue – but like a really bad case of zits, it’s an eyesore. And unlike zits, it’s not easy to fix. Dozens – maybe hundreds – of little divots in the roof and hood are fixable just one way: By replacing the afflicted panels. If it’s just bolt-on panels like the hood, that’s relatively straightforward. But if it’s a welded-together part of the car like the roof – then you’re looking at a lot of work and a lot of bucks and the end result might look okay but might also leak.  (See above about unibody panel tolerances and the challenge of getting everything to line up again, exactly right, after a repair.)

The upside, though, is that hail damage is – usually – just a visual thing and doesn’t affect the car’s operation – or longevity. But because it’s an eyesore, you can score a deal. Brand-new or nearly new cars that had the bad luck to be sitting outside on a Texas dealer’s lot when a bad storm rolled through – and got all dimpled up – are sometimes trucked up north and sold at a  deep discount. 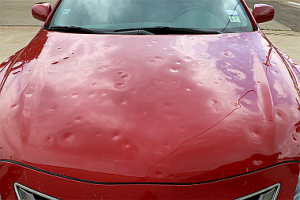 Sometimes, the discount is deep enough to make the car worth fixing. And even if not, there’s nothing really wrong with the car . . . other than it looking less than its best!