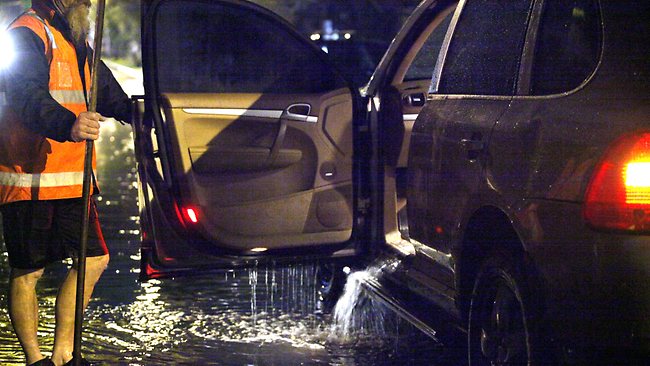 Something you don’t want may be floating your way soon. 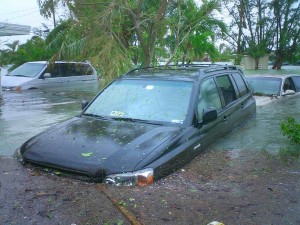 Well, it probably won’t actually float there. More likely, a truck will carry it there. To a used car lot near you – and far from the scuba diving lesson it got in Louisiana during the recent (and still ongoing) historic flooding down there.

Hope no one notices.

Water-logged cars are always bad news, but a water-logged modern car is worse news. Rust and moldy carpets aren’t fun but they can be dealt with. Endless electrical problems caused by water in electrical components and electrical connections never meant to get wet is much harder – and can be much more expensive – to deal with.

Sometimes, the only fix is to throw the car away and start over.

Better yet, avoid becoming the owner of a former U-boat.

When there is a major regional flood – as is occurring right now in Louisiana – there will inevitably be an increase in flood-damaged cars on the market elsewhere. Your risk of acquiring one just went up. Your “radar” should therefore be turned up. A too-good-to-be-true deal probably is exactly that, especially if it’s a popular model.

You want to know where it came from. 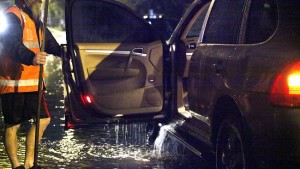 This will be a challenge if the car you’re looking at was water-boarded at some point down the line. Flood-damaged cars are often sold at vehicle auctions and change hands (and locations) several times before arriving at a dealer near you. You’ll want to dig deep. Services such as Carfax help, but it is very possible to “launder” titles so they look clean as fresh-laid snow. Sometimes you can find much more useful evidence on your own. Look in the door jambs and on the windshield, inside the car for those little service reminder stickers oil change places often leave. You might find one placed there by a Jiffy Lube in Louisiana. 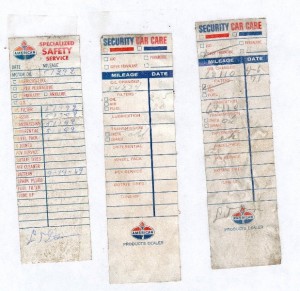 Check under the hood and in the glovebox for such stickers, too.

In particular, flip through the owner’s manual and any paperwork you find. Prior owners often jotted stuff down that will give you definite clues about the car’s origins. If the owner’s manual and paperwork are absent, that is a bad sign. It suggests the paperwork got wet – and was thrown away. Or had information about the car the current seller preferred you not have. A brand-new (replacement) manual in an older car is also worrying.

Be very suspicious of any anomalies on the title, such as several owners in a short period of time. And if you see – or hear – the word “salvage,” flee.

* Look for signs of moisture where moisture should never be –

Carpets are obvious, but these can be replaced. Same goes for door panels. But surface rust on interior metal parts is much harder to hide because those parts are harder to replace. Instead of looking down at the carpet and floorpans, look up, underneath the dash/steering wheel. Stick your head near the gas/brake pedals and – using a flashlight, examine the metal bracings (and also the metal brake/gas/clutch pedal levers). Closely examine the fuse panel, which is usually located in a place that should not get wet unless the car was flooded. 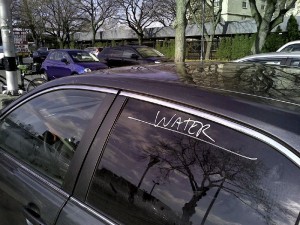 Pop the hood and trunk and look at their undersides. Behind any sound-deadening or trim material.

If the car was ever underwater, you will probably know it immediately, just by doing this. If you see rust in these places, especially if the car is only a few years old, it’s not the car you want.

Other good places to look for signs of prior immersion are headlights and tailights; these are usually sealed pretty tightly, such that rain water won’t get in. But if they are submerged, it’s another matter. Standing water inside headlight/tail-light assemblies is a bright red flag. Carefully look around the interior of the engine bay for water lines around the quarter panels. There should be none. 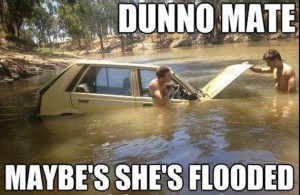 If you can – and you should – get the car up on a lift and have a look at its underside. If it was ever in deep and standing water, rusting of exposed suspension and other parts will usually be obvious – unless the car was subsequently treated to a spray can black paint shower (or similar) which is hugely suspicious and good reason to scratch that particular car off your list.

*Get in the car and go for a drive, with the windows rolled up –

Now use your nose. Mold has a particular smell. Also the “new car smell” sprays that used car dealers often use to cover up mold (and smoke) smell. Either is cause for further investigation. If it’s not humid outside and condensation forms on interior surfaces, like the windshield, it’s another reason for suspicion. Once a car gets a “Louisiana bath,” it is very hard to dry it out completely, quickly – which is a problem for a seller trying to unload a U boat.

*Check the operation/function of all dashboard lights and electrical accessories –

This should be on your list regardless of concerns about flood damage, but it’s particularly important if flood damage is suspected. Warning lights in the dashboard that come on/stay on/flicker on intermittently, balky power windows or power sliding doors/liftgates in cars not very old (ten years or less) without lots of miles on them (under 100k) should be thoroughly investigated as potential clues to deeper issues.

Most of all, keep in mind the axioms that there’s no such thing as a free lunch – and any deal that sounds too good to be true usually is.

The Big Lie – and the Small Truth