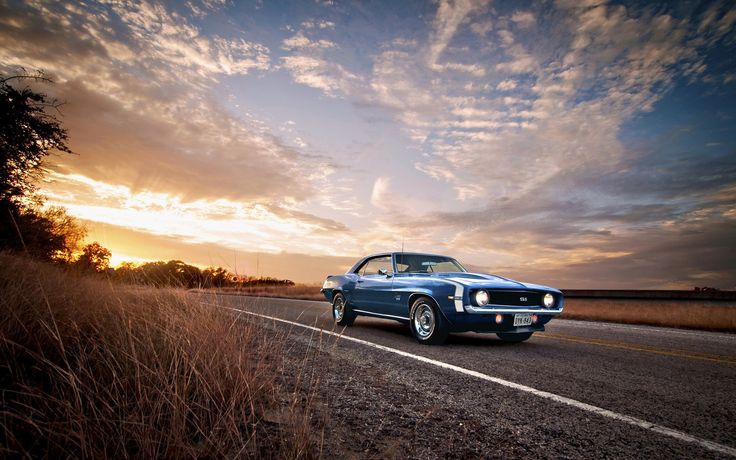 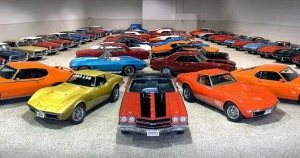 About two weeks ago, I got a new (2016) Mustang GT to test drive. 435 hp. This is a mass-produced, docile, AC-equipped street car with a dead-calm idle. Anything from back in the day – the ’60s and ’70s – that made that kind of power would have been a handful to drive on the street and also would almost certainly have been either a low-production, bracket race-intended animal (e.g., an L88 427 Corvette) or modified.

Almost nothing that came from the factory back in the day made 435 hp.

I wrote about this before (here) and there was much wailing and gnashing of teeth. It does not alter the truth. Hindsight is not 20-20. Most of the first-generation muscle cars were weak… by modern standards.

The turbo four cylinder (315 hp) version of the current Mustang is probably about “par” for what was available from the factory in a typical V8 muscle car from the late ’60s/early ’70s, in terms of horsepower and performance. The current EcoBoost Mustang’s output, if calculated using the SAE “gross” method that was used up until 1972, would likely be right around 360-380 hp, in the same ballpark as (for example) a ’70 Camaro Z28 LT-1 or a 440 four barrel ’71 Plymouth GTX. 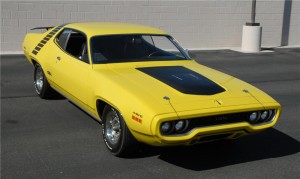 Only a small handful of elite classic-era muscle cars touted more gross hp than that.

The famous Chrysler 426 Street Hemi with twin four barrel carbs was one of the very few – and its advertised 426 hp was close to as good as it got.

And nowhere near what something like a new Dodge Challenger Hellcat (article here) offers (707 hp).

And when SAE “gross” horsepower ratings changed to SAE “net” ratings – the engine in production tune, installed in the car, with a full production exhaust… as opposed to on an engine stand, with open headers and tuned for maximum output – even the strongest of the classic-era muscle car’s numbers wilted like most men’s Willies when forced to view a naked picture of Hillary Clinton.

But it was a much more honest measure of an engine’s true output.

For example, one of the strongest factory-stock classic-era muscle cars was the 1973-’74 Super Duty 455 equipped Pontiac Trans-Am and Firebird Formula. These were pretty much the quickest factory stock cars Pontiac sold up to that time. The SD-455 TAs and Firebirds were quicker through the quarter-mile (low-mid 13s) than all but a handful of the most feral late ’60s stuff, such as the L-88 Corvette already mentioned and others like it (of which there were very few). 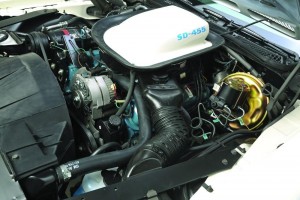 The SD-455 was a special engine, very low production and assembled on a separate line. It shared only its displacement with the more common (and non-SD) 455 V8s used in other Pontiacs (including run-of-the-mill Trans-Ams). It had a special heavy-duty block, specific high-flow round port cylinder heads based on the race-only Ram Aim IV heads Pontiac designed for the Trans-Am race series, an aggressive camshaft, big four barrel carb and a bunch of other special equipment, including provisions for dry sump oiling. Yet this huge – and radical – engine – produced how much power?

Less than the current Mustang’s four cylinder turbo engine. And not even half what the new Hellcat’s engine delivers.

Now, there is a qualifier.

But, the old Indian makes all kinds of threatening war whoops. There is the mournful wail of the Quadrajet four barrel carb’s enormous secondaries opening up, the unfiltered vacuum hissing and sucking through the shaker hood scoop. Modern fuel injected cars – no matter how powerful – cannot duplicate this sound. 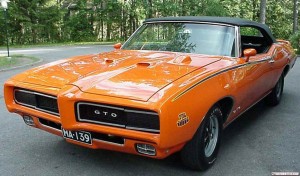 Nor the smell of raw gas, adding to the animal ambiance of the thing.

These old V8s had flat tappet camshafts, too – and as soon as the engineers dialed in more than grocery-getter lift and duration, the resultant idle got nicely choppy. You knew – back in the day – when a car was “cammed.” Some of the more radical grinds were leavened a bit with lifters that bled off some of the lift/duration of the cam at idle, but they clattered menacingly.

Long and short, there was no way – with a flat-tappet cam – to have a mild-mannered muscle car. If it was remotely quick, it was also inherently uncivilized. Add the usual large (by modern standards) displacement and what you had was a deep breathing, shaking/rattling angry-sounding thing that fathers of teenage daughters dreaded hearing roll up the driveway. 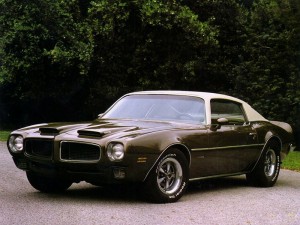 Then came – in the mid-late 1980s – roller camshafts. These allowed lots of lift and duration, but without the sturm und drang. The car could be very powerful, extremely quick… but also idle like a Camry.

That ’16 Mustang GT? Despite having literally more than twice the power my ’76 Trans-Am was packing when it was new, it is barely audible when parked next to my car with its engine on. Reason being, of course, the new car has four catalytic converters (which act as mufflers) as well as actual mufflers in addition.

If I start my car in an underground parking lot, the exhaust concussions set off other cars’ alarms. 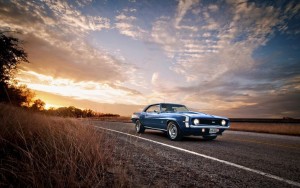 The whole car vibrates. It is like riding a roman candle.

The Mustang, like all modern performance cars, also has fuel injection; specifically, direct port fuel injection. Which stabilizes the idle and also entirely eliminates the hard-to-get-it-started blues that used to be part of the whole Muscle Car Experience. Anyone who has tried to cold-start a ’70 Hemi ‘Cuda or even a Boss 302 Mustang will know all about it.

Now drive the New vs. the Old.

Most classic muscle cars were fitted with 15×7 steel wheels (some had 14s) and 70 series tires. Traction control was you trying to not get too deep into the throttle. It was very hard – it took real skill – to get down the quarter-mile without getting sideways. These cars were dangerous, which is what made them such a thrill.

The new GT is a 12 second street car but does not feel it – or sound like it. 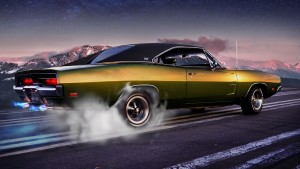 Fathers of teenage girls are not nearly as skeeved out when they see one roll up the driveway. If they even do, because they probably won’t hear it coming.

And that’s the difference that matters.

The old stuff left memories, like burnouts in front of your best friend’s house, that you can still smell even after 40 years. The new stuff doesn’t do burnouts (big tires, traction control), is very, very quick…

And 40 years from now, no one will remember.