What can your car tell you just by the way it smells – or tastes?

Almost always, this is a sign the cooling system’s sprung a leak. The chemicals in engine coolant give off a syrupy sweet smell that’s particularly noticeable when the fluid is hot (as when the engine’s been running for awhile) and dripping onto something even hotter – like an exhaust manifold – and burning off as you drive. If you smell that smell inside the car, check for signs of wetness around the front seat passenger footwell area. The heater core – filled with coolant – is located in this area and may have sprung a leak, which you will want to get fixed ASAP. The leak will only get worse if you don’t get it taken care of – and the engine coolant/water mix will eventually make your car’s interior a soggy, moldy-smelling mess. And probably rust out your floorpans, too. 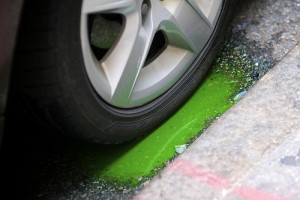 You’ve probably read or heard that coolant tastes sweet, too. It does –  but don’t taste it yourself to find out. The stuff is extremely toxic. To us – and animals. If you spill any in the garage – and have pets – be sure to mop it up before they lap it up.

That sulfurous smell is not a sign that Satan has taken possession of your Camry. It’s a sign your Camry’s catalytic converter isn’t working as it should. When everything’s right, a modern car’s exhaust ought to smell like … nothing. The mission of modern engine controls is to maintain exactly the right air-fuel ratio at all times; to precisely monitor the chemical composition of the exhaust stream in real time, the car’s computer constantly fine-tuning to optimize the burn. But when something goes awry and the burn is no longer optimal – too much fuel in the air-fuel mix, for instance – the converter gets overwhelmed and issues its canary-in-the-coal-mine cry via that god-awful rotten egg stink. 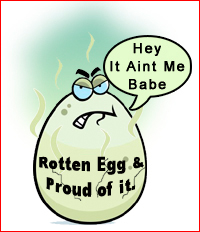 If you smell that – especially if you smell more than a slight whiff of it every once in a blue moon – have the car looked at as soon as possible. Because it could be more than a matter of a really foul smell. It could end up being a really big bill. For a new catalytic converter. They are very sensitive things – and fairly easy to damage. If the car runs too rich for too long (perhaps because of faulty oxygen sensors; these are the parts that “sample” the chemical composition of the exhaust and feed the info to the computer, which then adjusts the air-fuel ratio accordingly) the converter’s insides can become fouled with soot to the point that the converter can no longer convert efficiently. And they can’t be fixed. Just replaced. Many new cars have at least two converters. Some have four. Each might cost $200 or more – not counting the install labor. 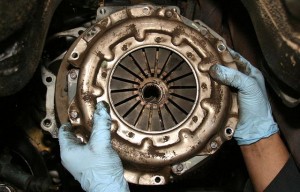 This one’s hard to describe, but if you’ve ever smelled it, you’ll recognize it instantly. It is the funeral pyre of your clutch (manual transmission cars). The smell arises – typically – when the clutch is being abused, either on purpose, or by someone who does not know how to drive a manual-equipped car properly. In both cases, the source of the smell is slippage. The clutch is not fully engaged. The driver is either “feathering” the clutch on purpose – to launch the car as forcefully as possible – or the driver is a newbie who is trying not to stall the car by doing what amounts to the same thing. Either way, what’s happening is the clutch is burning itself up. The friction material – which is similar to the material used for brake pads, by the way – is literally being ground away by the spinning flywheel – the thing it (the clutch) is supposed to clamp onto in order to transmit the engine’s power through the transmission to the drive wheels. But when the clutch is not quite engaged – but engaged just enough to slip and generate friction (and heat), the clutch material gets what amounts to rug burn.

A clutch pedal should be in – or out. And in-between as little as possible.

Tip: A quick way to tell whether you’ve killed your clutch is to get the car up to about 30 MPH in top gear and then floor the accelerator. If the engine revs up – but the car does not accelerate – your clutch is likely toast.

Usually, this results from one of two sources.

The first is the worst – because it’s the hardest to fix: Wet carpets/underlay resulting from a leaking windshield, window or similar. First, you’ll have to fix the leak – then you’ll have to fix the carpet. Which often means replacing it. Once mold grabs hold, it’s hard to get rid of it without excising it. Especially because the carpet is usually molded to the floorpans, held in place by seat tracks and so on – and it’s very difficult to dry it out. One trick you can try is to use a hair dryer on wet areas. It’s tedious work – but cheaper and easier than pulling and replacing the rugs.

The second source of that gym locker smell is mold in the AC/heater ducts – and that typically arises from internal condensation and poor drainage. You can buy products to freshen up the smell of the air coming out of the ducts, but the real fix is to deal with the condensation/inadequate drainage issue. If you don’t see a small pool of water underneath the front end of the car after running the AC for awhile on a hot day, then you likely have this problem.

Luckily, the fix is easy – and pretty much free.

You’ll need to locate the AC system’s drain pipe – search online or buy a service manual for your vehicle – and make sure it’s not obstructed.

If it is, clean it out – and that moldy/musty smell should go away within a couple of days.