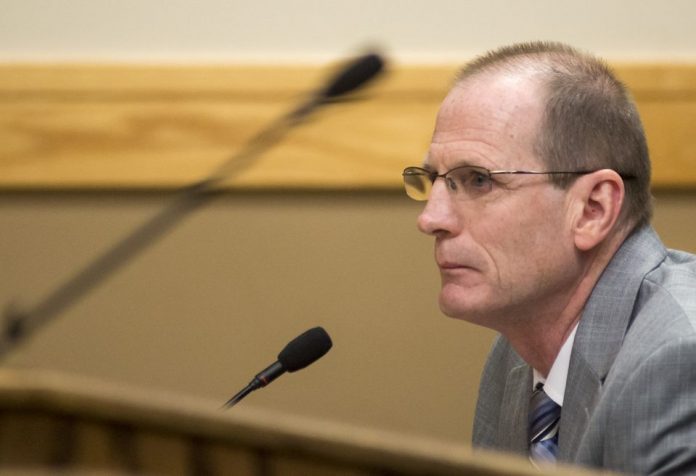 What would happen to a mundane who recklessly handled a handgun such that it “went off” unexpectedly and an innocent bystander ended up shot as a result? Something very different, of course, than happens to “heroes” when they recklessly handle handguns.

Ex-“hero” (for now) Adam J. Brown will spend a month in jail for firing a gun in a high school classroom, causing a bullet to strike a teacher and trying to cover up the incident.

However, if he stays out of further trouble, he’ll avoid having a felony on his record.

Wearing a gray suit,  Brown appeared before Bay County, Michigan Circuit Judge Harry P. Gill for sentencing. It initially appeared that Brown would not be incarcerated, as part of the plea deal he accepted in April, which stipulated he would receive a delayed sentence for one year.

While Gill did delay sentencing Brown until April 23, 2018, he also ordered Brown to serve 30 days in jail. Between his release from jail and the April date, Brown will effectively be on probation. If he complies with all the resultant terms, he’ll be allowed to withdraw his no contest plea of tampering with evidence, a four-year felony, and instead plead to two misdemeanors.

It apparently pained the robed enforcer to have to punish this “hero” at all.

“This is a very difficult case,” Gill said. “There is no question… that you have led an exemplary life. I think you are probably a very fine human being.”

He added that the precipitating incident is two-fold tragedy, both for Brown and for the teacher he wounded, who is continuing to suffer emotional trauma.

“For a guy that has spent his adult life concerned about firearms safety, this was a very adolescent act,” Gill said. “But there are more important aspects of this case. There are two reasons I would surmise that police officers are in school. One is the obvious one of security, and the second one is as a role model. It appears for many, many years you were exemplary as a role model. You made a very poor decision to lie about what happened. You attempted to destroy evidence, or to hide it. What you did was a very human decision — one that many of us might make.

“We never know when faced with the decision to do the right thing or the wrong thing what we will do when faced with that pressure. You were under great pressure, you were frightened, you were embarrassed, in fear of losing your job, your reputation, your career. Many of us being human may not have had the courage to do the right thing, but it was the wrong decision. The court needs to take cognizance that it was the wrong decision.”

Then he squeezed out the usual Blue Discount:

“I feel that because of the circumstances, it’s necessary I impose some incarceration,” he said. I need to show the school community that even good people who make mistakes need to be punished.”

Before the sentence was imposed, defense attorney Christopher Tomasi lauded his client’s 21-year career with the Bay County Sheriff’s Office, most of which was spent as the school resource officer at Bay City Western High School and Middle School in Auburn. In 2012, CrimeStoppers of Bay County named Brown its Police Officer of the Year Award, Tomasi pointed out.

Tuscola County Prosecutor Mark E. Reene, who was appointed by the Michigan Attorney General’s Office to handle the case, said his office has been in contact with teacher Brenda Amthor, who was struck by Brown’s bullet.

“The victim continues to suffer the aftermath of what transpired and probably continues to think about what may have happened,” Reene said, adding it was “mere fortuity” the situation wasn’t worse.

Reene said Amthor has amassed $484.20 in counseling expenses, and that number will probably rise. Gill scheduled a meeting with attorneys in July to discuss how much restitution Brown will owe. Brown gave a brief statement, pausing several times as he was apparently choked up. He said the school and police communities have been like family to him.

“I just want to say that I let them down and I’m really sorry and I am willing to fulfill the orders of the court and I appreciate you allowing me to talk,” Brown told the judge.