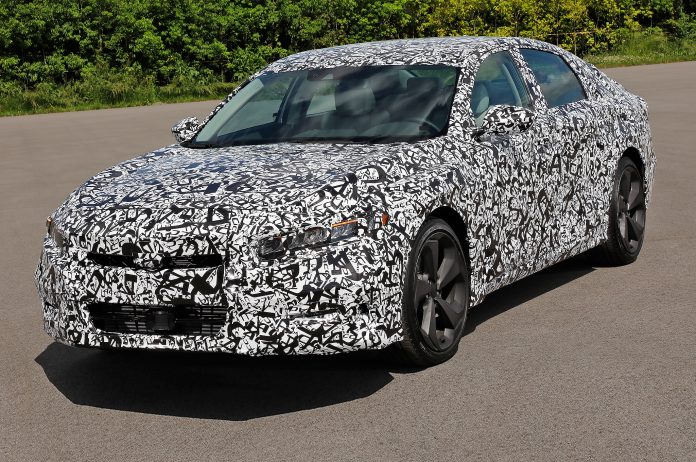 Another one bites the dust.

Honda’s redesigned 2018 Accord will follow an industrywide trend of using turbo-goosed small fours and a CVT to appease Uncle and his fuel economy fatwas.

Honda detailed the change in powertrains on the latest Accord on Friday. They includes the nameplate’s first-ever turbocharged engine and the elimination of the previously optional V6 engine.

The base Accord will use a 1.5-liter four-cylinder turbocharged engine paired with a continuously variable transmission or a six-speed manual gearbox.

The previous Accord’s optional V6 engine will be replaced by a 2.0-liter turbocharged four-cylinder engine that’s largely the same as the engine in Honda’s new Civic Type R.

The upmarket Accord’s turbo engine will be paired to a ten-speed automatic transmission – a first in the industry for a front-wheel-drive car – or a six-speed manual.

Honda didn’t disclose horsepower or estimated fuel economy ratings for any of the new Accord models. The 1.5-liter four-cylinder is used throughout the Honda Civic and CR-V lineup, where it makes as much as 206 hp. The 2.0-liter turbo is very similar to the one in the new Civic Type R where it’s tuned for 306 horsepower.

Honda said all of the gasoline models’ transmissions and engines used in the Accord will be built in the U.S.

Honda’s next-generation 2.0-liter direct injected DOHC turbocharged engine will be optional in the 2018 Accord.

The two-motor powertrain in Honda’s Accord hybrid will also get an update, though Honda was mum on details.

The redesigned 2018 Accord is switching to a new modular platform that already underpins the latest Civic and CR-V and its design is expected to evolve into more of a fastback sedan setup, based on recent spy photos. More details will be announced in the coming weeks ahead of the car’s fall on-sale date.

“Just as the new Honda Civic injected new energy into the compact car segment, we expect this all-new 2018 Accord will make people rethink the midsize sedan,” Jeff Conrad, general manager of Honda, said in a statement.

Like the redesigned Toyota Camry going on sale soon, Honda will launch the Accord into a midsize sedan market facing stiff headwinds.

U.S. sales of midsize sedans have plunged 18 percent through May of this year; Accord deliveries are down 7.3 percent.

Incentives and inventories are building up as consumers increasingly flock to crossovers and rising used-car inventories dampen demand for new sedans.