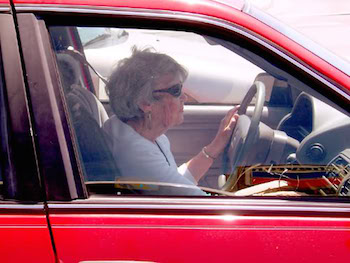 I wish I’d filmed this one – but I was too busy swerving, trying to avoid a head-on collision.

I was  waiting at a “T” intersection, waiting for the light to go green so that I could cross the intersection, make a left turn and merge with southbound traffic. The light turned green, I began my turn . . . and came headlight-to-headlight with another car coming at me, driving the wrong way down the road.

Behind the wheel was an old lady wearing those opaque Old People oversized sunglasses – which to me is like seeing a guy guzzling straight from a fifth of Jack Daniels. It is a clue that there is a problem.

But the old coot glasses – and the certainty of, at best, really poor vision and probably glaucomic semi-blindness – are given a pass by law (and law enforcement) while the Jack Daniels results in merciless and brutal prosecution by the law and law enforcement.

Isn’t impairment the relevant consideration? Shouldn’t it be?

Of course, it isn’t.

If it were, old coots who can barely see – and advertise the fact by wearing those huge Old People oversized sunglasses – would be pulled over on sight and taken of the roads as aggressively as the law and law enforcement go after those who tipple, even if slightly (and even though their impairment is hugely debatable or at least, not established). 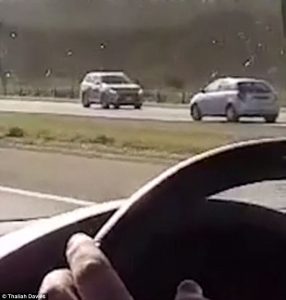 It would be just as illegal for a person to get behind the wheel of a car wearing those Old People glasses – definitive proof that their vision is seriously impaired – as it is for anyone else to have even a single open beer in their hand.

Sseatbelt scofflaws are pursued with greater avidity than the glaucomic, enfeebled old.

The guy having a single beer in his car on his way home isn’t remotely “drunk” – legally or factually. Yet it is a crucifixion by the road offense even to pop the top. For your passenger to pop the top. You can be arrested for “drunk” driving if you are found sleeping in the back seat of your car. The engine stone cold, the car not even moving.

The almost-blind – but sober! – are free to wander over the double yellow, drive the wrong way down streets, onto curbs, breeze through completely red lights  . . . because they are merely old.

They are therefore to be indulged.

We will all be old one day ( a cop actually told me so, once) and therefore we must be patient and understanding.

No matter the impairment.

It is striking that even the usual warble that is used to justify every sort of totalitarian tactic and imposition – saaaaaaaaaafety! – is never warbled when it comes to the glaucomic ancient among us. 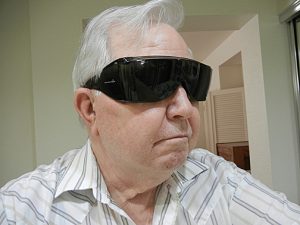 Probably, the law enforcer who showed up would be solicitous toward the old bird; she is probably someone’s grandmother! He probably would have offered to give her a ride home.

Imagine the same scene except replace the blind old lady with a young guy in a truck with an open beer in his truck.

And it’s not only the old and blind who get a pass.

Shitty driving generally is tolerated – so long as the person doing so isn’t drinking . . . or “speeding.” Literally every single day, on my way into town, I roll up behind a driver who cannot keep his car in between the painted lines on a mildly curvy stretch of road. They swing wide to the left (across the double yellow, into the opposing lane of traffic) and then metronomically swing wide to the right (two-thirds of the car off onto the shoulder, where someone might be walking or riding a bicycle).

They are never pulled over.

There are no “safety” checkpoints for them.

The last thing that is expected of anyone these days is competence behind the wheel. But tread over the politically incorrect line when it comes to drinking – or speeding – even when both are done competently and responsibly, with nothing to point at that could be adduced as evidence of impaired driving – and it’s roadside crucifixion time.

But glaucomic grandma will not be taken off the road.

At least, not until she finally does kill someone.