For automated – note, not “autonomous” – cars to become other than a technocratic curiosity, to make the concept functionally viable on a mass scale, it will be necessary to eliminate cars that aren’t automated. That’s because the whole point of automated (not autonomous – which means independent) cars is to collectivize transportation.

To regiment and control it.

Cars that are still entirely under the control of the person behind the wheel do not fit into this matrix. They are outliers, the vehicular equivalent of a voluntary income tax – and we can’t have that, either. 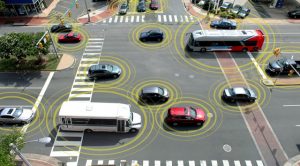 Hence the proposal that all new cars be capable of so-called “vehicle to vehicle” (V2V) communication. That they be fitted with the technology to constantly transmit and receive data about their direction, location, speed and so on.

V2V is a critical step toward the replacement of autonomous cars with automated cars – which must be aware (like the Terminator) of their environment, of the other cars within a certain radius of their position at any given moment. This in order to anticipate the need to alter course or speed to avoid impacting another car.

Which the car will do – without any input from you.

That is how it’s being presented – and it’s on that basis it will be force-fed to us. Including those of us who want nothing to do with it. Can you say rip tide?

About half of all new cars already have or offer (it’s not yet mandatory) automated braking and steering “assist.” The car decides it’s necessary to stop – and applies the brakes if you don’t.

It steers itself in the direction it thinks is right.

It’ll be like having a cop with a two-way radio riding shotgun – only worse because it will be a Super Cop. A single, central all-controlling cop who cannot be dodged – much less bargained with.

He will control the speed and direction of all the cars under his supervision. Decide when you will move at all.

Which brings up the issue of autonomous cars that do not have V2V capability. Or automated “safety” systems.

They aren’t subject to supervision – much less control. They are wild cards, under the control of the person behind the wheel. He can accelerate as he likes – and brake as he likes and when he decides it’s necessary to brake.

His direction is random. Only he and those he chooses to inform know where he is going – and how he gets there is up to him.

He can elect to ignore stupid/arbitrary traffic laws such as those forbidding perfectly safe U turns and right-turns-on-red.

Truly autonomous cars –  that is, cars without V2V technology and not equipped with driver pre-empting automated driving technology – will have to be gotten rid of.

You can already hear the Fat Lady warming up her pipes. Picture Elon Musk with lipstick.

The DOT proposal does not say autonomous cars will be banned – not openly. But it is the necessary and logical conclusion of this whole putsch.

Automated and autonomous cars – oil and water. It has to be one or the other. It should be obvious which one the government and the corporations that increasingly might as well be the same thing (picture the Tyrell Corporation from the original Bladerunner movie) favor. 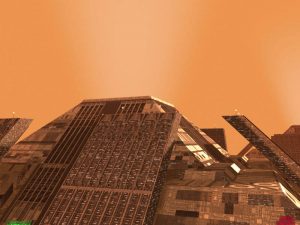 It is a control freak’s multiple orgasm.

The government will achieve the long-sought dream of ending free movement – at least, free movement by car. The squat, Beetle-like people that Orwell wrote about, who gravitate toward government, will know when you come and when you go and much more important, it will be within their power to determine how you go or if you go at all.

Corporations – the big car companies – will be able to put most of the population on the debit card merry-go-round. Whenever you want to go someplace, you click an app to summon a car and just as quickly (probably more quickly) the charge-by-the-hour will be deducted from your account.

Automated cars are nothing less than a kind of Metro Bus diaspora. As if the trains were able to leave the tracks and venture down sidestreets, but no less under the control of the conductor.

An epic fight is brewing – hopefully. 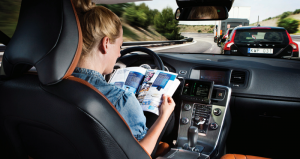 It is a fight that will pit Americans who cling to the idea of being autonomous – of being in control of their cars – and how they come and go – against those who do not understand that automated cars will be the end of their autonomy.

Many of the latter are foolish enough to believe that automated cars will free them, which is bizarre given the fact that their cars will be utterly controlled by someone else. They also foolishly imagine they will be whizzing along at high speed, getting to their destination much faster and more efficiently.

Think about any form of collectivized transportation and ask yourself how fast and efficient it is. Whether it is geared for speed – or the least common denominator.

Channeling Charleton Heston in the first Planet of the Apes (end scene):

They finally, really did it.