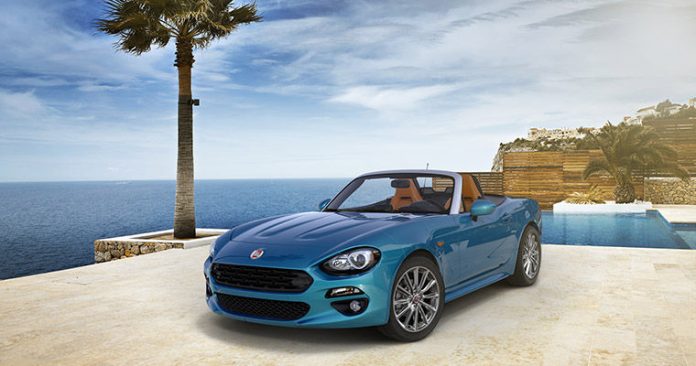 Is there room enough for two of basically the same thing?

It depends how different they are.

Back in the ’70s, GM was able to successfully sell two iterations of the same thing – the Chevy Camaro and the Pontiac Firebird. They both sprang from a common “F” platform – and had near-identical frames, suspensions and beneath-their-skins things. But they were different enough where it mattered to attract different buyers. And there were enough of each to go around for both. Chevy sold lots of Camaros. Pontiac sold a bunch of Firebirds.

So what made the difference? 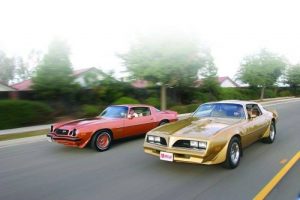 It was the engines.

In those days – the great days – Camaros had Chevy-built engines; Pontiacs came with Pontiac-built engines. It wasn’t necessarily a question of better – or worse. It was a question of differences. Chevy V8s did not sound or behave like Pontiac V8s; they made more horsepower (usually) than torque. The Pontiac V8s – which were usually larger than the Chevy V8s – were known torque monsters.

This, in turn, gave each car an entirely different character.

Accentuate these mechanical differences with some cosmetic and branding differences – Pontiacs were always a bit sleeker looking and had nicer trim than Chevys – but the Chevys were usually more affordable – and you had a winner. 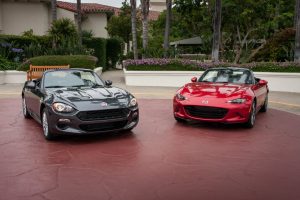 Well, maybe it can happen again.

Not with Pontiac, of course. The brand is gone and the last Pontiac V8 was built many moons ago.

But with Fiat – and Mazda.

The 124 Spider is an Italian-bodied two-seat roadster based on the Mazda Miata – with which it shares a common platform, suspension layout and most critical dimensions  (including the same 90.9 inch wheelbase). 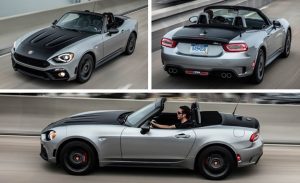 Both cars are also built on the same Mazda assembly line – in Hiroshima, Japan. But those destined to leave the line as Fiats get a Fiat-built (and mightily turbocharged, 22 pounds of boost) 1.4 liter engine in place of the Mazda’s . . . Mazda-built (and not-turbocharged at all) 2.0 liter four.

This is enough to make all the difference.

Like the big-inch Pontiac V8s that powered classic Firebirds, the small CC but turbo-boosted Fiat engine produces much more torque – and lower down – than the Mazda’s engine. Which – not unlike the Chevy small block V8 engine – is more a high-RPM horsepower engine.

The Fiat looks a little different, too. It’s longer by a few inches (this was done for practical reasons – to make room for the turbocharged engine) and has some unique body panels as well – just like the classic era Firebird.

Prices start at $24,995 for the Classica trim with six-speed manual transmission; you can order an automatic transmission as a stand-alone option for $1,350. 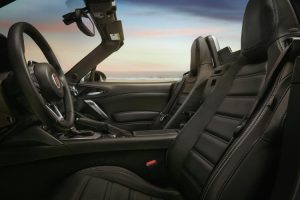 For cross-shopping purpose, a Miata (like the old Camaro) starts out a bit less at $24,915 for the base trim with six-speed manual. Prices for the Miata top out at $31,270 for a Gran Touring with automatic transmission. 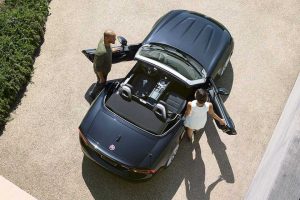 Both cars come standard with manual-folding cloth soft-tops – but the Mazda offers a targa (RF) roof option that is not – yet – available with the Italianized version of this car.

The Mazda on which it’s based was all-new last year.

Not as bellybutton common as Miata 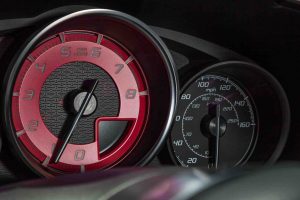 Mazda engine may not be turbocharged – and makes less power – but it’s known to be almost unkillable. They are 200,000 mile (and then some) engines.

Will the Fiat’s uber-boosted (22 psi, peak) engine last as long?

Will Fiat last as long? The brand is not doing very well – like Pontiac, toward the end. What happens to Fiat’s cars if Fiat dealerships vanish? 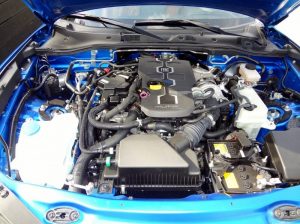 The 124’s engine is basically the same engine used in the Fiat 500 Abarth. Like the 500, it’s a very small engine – just 1.4 liters. This is about 25 percent less engine – in terms of physical displacement – than the Miata’s 2.0 liter engine.

Use an exhaust-driven turbine to compress and then force-feed air to the engine. More air (plus more fuel) equals more power . . . when the engine is under boost. When not, you revert to less engine – which uses less fuel.

Until you dial up the boost again. 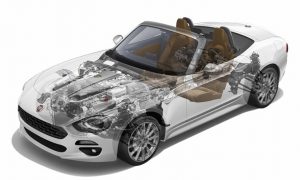 You also get better gas mileage – if you can keep your foot out of it. 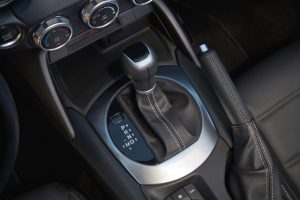 It’s not a huge difference, but it is a noticeable difference. Especially if you can keep your foot out of it.

Acceleration-wise, it’s a draw. The Miata is just slightly quicker: It takes about 5.8 seconds to get to 60 vs. six flat for the Spider. It’s not a difference you can detect without a stopwatch. 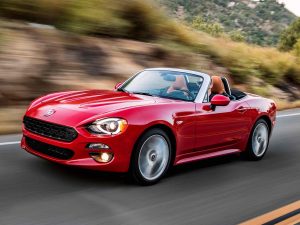 There is no Firebird (or Pontiac) anymore because after 1981 – when GM killed off the Pontiac V8 – the Firebird became a Camaro in just about every way that mattered. It had the exact same Chevy-built engine – and so drove and felt exactly like the Chevy.

It was a skin job, nothing more.

The Spider, on the other hand, is not a mere skin job. Its Fiat-built engine is a very different engine.

First, the sound. Both engines sound good, but each sounds … different. The turbo’d Fiat does the wastegate snap in between each full-throttle upshift. Its voice is lower – and deeper.

The Miata is quieter  – at first. But this changes as the tach needle flashes past 4,500 and the DOHC engine (the Fiat is SOHC) comes on the cams (plural). This is an engine that was born to rev – all the way to the fuel cut-off at 7,000 RPM. 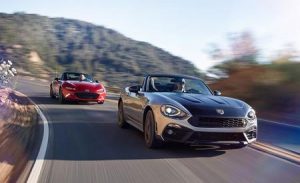 But it needs to be revved to get into its powerband – and get the performance it’s capable of giving you.

Less so, the Spider.

See the powerband stats above. Peak torque is produced at a diesel-ish 2,500 RPM – vs. 4,600 RPM for the Miata’s engine (which also makes 36 ft.-lbs. less peak torque). This torque is not peaky, either. It’s a smooth swell, like the ones that lift you up when you’re surfing on a body board, just past the breakers. In a still-light car like the 124, this translates into the feel of a much bigger engine – like the 455 in my ’76 Pontiac – that projects the car forward without much apparent effort.

Of the two, the 124 is better in stop and go traffic for this reason.

If you drive it back-to-back vs. the Miata, you’ll discover you don’t need to shift as often when just driving along to maintain the pace. The 124’s engine is more immune to lugging in the lower gears because of the turbo-boosted torque. Third works at almost any speed short of a crawl.

In the Miata, you’re kept busier.

But the other side of that coin is you may want to be kept busier. The Miata is a gear jammer’s best friend. Both cars use the same six-speed manual (and six-speed automatic, but who buys an automatic car like this?) and have the same superlative short-throw shift action. It is an absolute blast to run them through the gears. 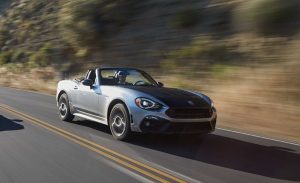 But the run in each is different.

In the Miata: First to redline at about 7,000 – clutch in, hard pull on the lever down to second, off the clutch (tire chirp!) and back on the gas. In the Spider, the tires chirp at launch – remember the boost! remember the torque! –  and you’ll want second just a bit sooner. The Fiat pulls harder in second and third – but by fourth, the Mazda is at the wine glass-shattering peak of its aria.

Also, the Fiat’s suspension tuning is more forgiving – and it’s a quieter car, because of additional insulation (the probable source of most of the extra 104 pounds of curb weight).

You pays your money – and you takes your choices.

Which are real choices. 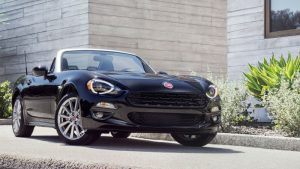 The kinship is clear – but there are differences here, too.

Overall proportions, for one. The Fiat is 159.6 inches long vs. 154.1 for the Miata yet both ride on the same 90.9 inch wheelbase. The stretch was necessary to properly merge the Fiat-built engine into the car, without mucking up the near-perfect 50-50 weight split, front to rear.

Or mucking up the lines of the car.

The “twins” have different faces, too – and hoods/front quarter panels and rear clips. These do not interchange. Fiat stylists wanted the 124 to remind people of classic Fiat sports cars like the Sport Spider (1966-1980) so it has almost round headlights (vs. the Miata’s turning Japanese slits) and a more traditionally shaped – and located – grille. 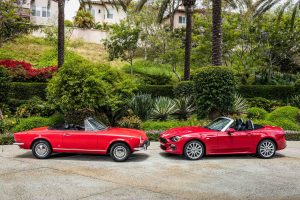 Again, it’s not about better or worse as much as different.

There is also the matter of exclusivity.

Though neither of these two are expensive cars, the Fiat is much more exotic than the Miata by dint of there being so few of them. You do not see a 124 Spider on every corner – and may have yet to see one in the flesh at all.

They are rare birds.

Mazda, meanwhile, has made nearly 1 million Miatas over 20-plus years of production. They are everywhere – and for that reason, Miatas are as exotic as Starbucks.

Not there is anything wrong with Starbucks. But it’s not the same as getting a cup of something . . . different from a local independent joint. 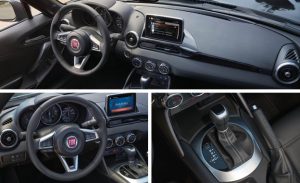 One area where there is virtually no difference is inside the cars. Other than a Fiat-badged horn button in the center of the steering wheel, different redlines on the tach face and slightly different facings on the 150 MPH speedometer (the Fiat’s shows “150” while the Miata has 140, then a dash at the end of the scale where 150 would be if they decided to put a number there, but decided against for whatever reason) the 124’s cabin and the Miata’s cabin are essentially the same – down to the rotary/ball-shaped air vents and floating, iPad-looking LCD display to the right of the main instrument cluster – which is traditional sports-car analog.

The Abarth does get a racier, red-faced tach and a 160 MPH speedometer, too. 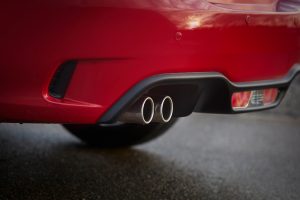 Most of the features that are available in the Miata are also available in the Fiat – including luxury amenities such as heated seats and a performance Brembo brake package. But you can further enhance the exclusivity factor of the 124 by ordering the Prima Edizione (special edition) package, which includes Azzurrro Italia blue paint and a numbered placque.

There is one other difference that probably needs to be discussed – and taken into account.

Mazda is blue chip, 100 percent stable and as likely as taxes to be around five years from now.

Fiat is another matter. 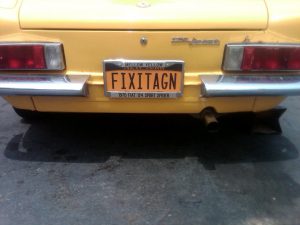 Though the brand is hugely popular in Europe, it has not made much headway here. The Fiat combine bought Chrysler in the hope that it could leverage Chrysler’s market presence to establish a Fiat presence here.

So far, not so good.

Probably for two reasons. One, Fiat sells small (really small) cars only and most Americans prefer larger cars. If you want a car that’s larger than micro, Fiat hasn’t got anything for you.

Two, the legacy of Fix it Again Tony. There is a perception that Italians make beautiful things that don’t work very well. There is (or at least, was) some truth to this.  It’s why Fiat had to leave the U.S. back in the late ’70s. 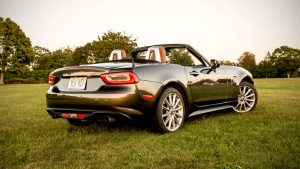 And the legacy of that may prove to be the reason it ends up leaving the U.S. again.

If it does happen, Fiat owners will be left in the lurch. There would be no dealer support; parts might be harder to get, service more of a hassle.

It is something to consider.