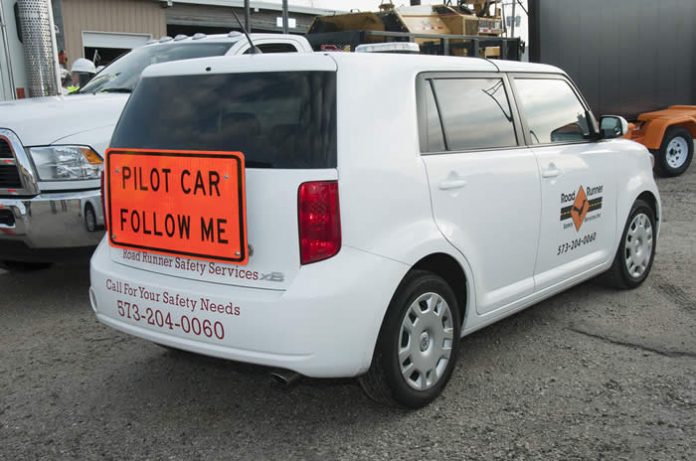 The Retard State advances – and its religion is the Safety Cult. There is fear everywhere. Danger lurks at every turn. People must be protected – chiefly, from themselves. No matter how much they don’t need to be, or because some other people do. 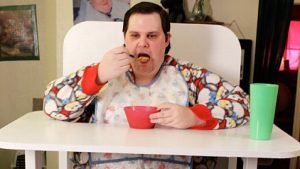 It is usually a truck or van, actually – with an idiotic blaze orange sign on the tailgate or rear end that says, in big black letters: Pilot Car Follow Me.

Because people – some people – are apparently too got-damned incompetent to manage the challenge of negotiating a work zone on their own. They can’t comprehend that, when one lane is closed because the guys are fixing potholes – all of this clearly obvious and marked with cones and besides, the closed lane is closed and the other lane is open – they should drive on the open lane, through the zone and then – having cleared the zone – return to their normal lane and proceed.

This is too much for them, it seems.

And so, the Pilot Car.

Now, instead of waiting for the construction worker with the walkie-talkie to rotate his Stop sign to Slow and wave you forward, to proceed through the zone using the clear lane – a task not of Mensan or Dale Earnhardtian difficulty – you must wait eternally for the Pilot Car to lead the way, glacially, through the work zone.

Even when there is no work going on (see video above).

The Pilot Car maunders down the road, its conga line line of cars following behind. When it finally reached the end of the work zone, it pulls off and the by-now quarter-mile-long conga gradually tapers past, like a funeral cortege. After the last car finally goes by, the Pilot Car lazily makes its U-turn and heads back the other way – yellow Christmas tree strobe light on the roof flashing. 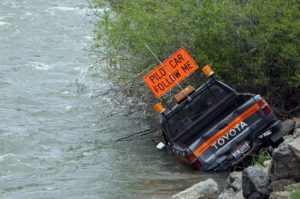 It must then make another U turn at the far end of the zone, then position itself at the head of the other conga line – and only now are they allowed to proceed.

The construction workers in charge of the Pilot Car and the work zone have become as DMV Frau-like as you’d expect, having been inducted into the Safety Cult as minor priests. Over-the-top precautions are the order of the day, all of them as necessary as Fez hats on cats only the Fez hats at least look kind of cute.

Enstupidation is its own fountainhead.

It is becoming explicit that driving skills are passe. That obeying signage is the uber alles of our era. This of course being a crucial prerequisite to getting people to weary of driving – to make it soporific – in order to ease their acceptance of automated transport, which is the next logical step.

People who can drive chafe at the sight of a Pilot Car. It is insulting, like a waiter offering a high chair to a grown man. They also resent the time wastage. The Pilot Car at least doubles the wait – and so, the tedium – of dealing with a work zone.

But the already ear-tagged? The chip-ready, Cloverized Elio baptized in the waters of the Safety Cult? He is busy on his sail fawn and is only annoyed that the car isn’t automated and that he will have to exert some slight effort to follow the conga line behind the Pilot Car, when it eventually gets rolling.

He does not care what’s under the hood; only that the stereo is good. He isn’t a driver anymore than a thug mumbling unintelligible doggerel into a microphone is a singer. Of course he needs a Pilot Car.

More such are needed. 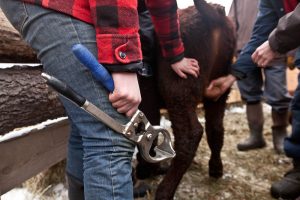 Any fool can see the concerted pincers, the great kessel forming. Loosely at first, decades ago – but the ring grows tighter now. At every turn, presumptive incompetence – encouraged by the strangling of competence. Snip their gonads, just like yearling bulls – before the testosterone begins to flow. They are so much easier to ear tag afterwards; so much easier to direct down the chute.

Cue the song: And that’s where we get hamburger!

If it’s not deliberate, designed – I will turn in my tinfoil hat.