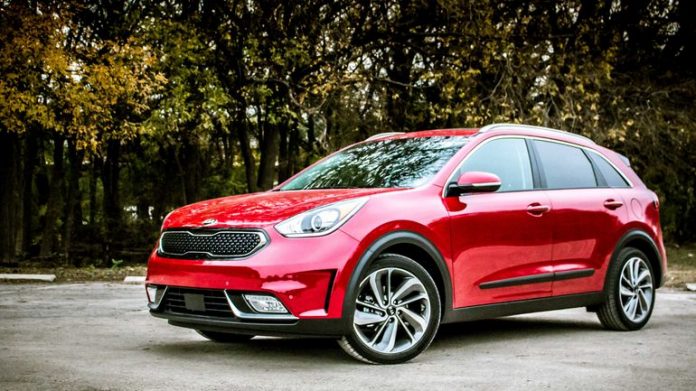 The Prius has a rival that no one seems to know about – probably because Kia hasn’t done much to market its hybridness.

It’s the Kia Niro – and you probably haven’t heard about it.

And if you’ve seen one, you probably assumed it’s yet another mini-me crossover SUV. It certainly looks that part.

But while it has more ground clearance (6.3 inches) and sits higher than a typical car – it even has roof racks – it hasn’t got and doesn’t offer all-wheel-drive. 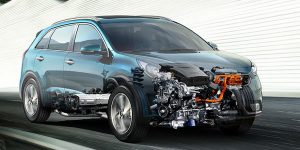 Instead, there’s a hybrid-electric powertrain and the capability to go 50-plus miles on a gallon of gas.

And get you to 60 in a little more than eight seconds.

Without costing you a fortune to do both of those things.

Base price is $22,890 for the FE trim; a loaded touring trim stickers for $29,650 and includes heated and cooled leather seats, a heated steering wheel, eight-inch touchscreen and an eight-speaker Harman Kardon audio rig.

Ford’s C-Max hybrid is similar – but costs more ($24,120 to start) and isn’t nearly as economical to drive (42 city, 38 highway; many current gas-engined cars come really close to that).

The Toyota Prius C is as fuel-efficient (slightly more efficient, at least on paper) and it costs less to start ($20,150).

But the Prius C is deadly slow.

The Niro is a new model for Kia – and the only compact-sized hybrid crossover wagon that you can get for about $23k that gets 50-plus MPG and also gets to 60 in less than a geological epoch. 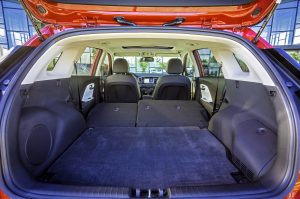 Exceptional fuel efficiency – plus more room inside than in the Prius C.

The extra ground clearance will help when it snows.

Gas is so cheap that buying a hybrid anything is hard to justify on economic grounds.

You could buy a non-hybrid small crossover/wagon and spend $5k less up front.

Unless gas prices go up a lot, it will probably takes years before what you save on fuel makes up for what you spend on the car. 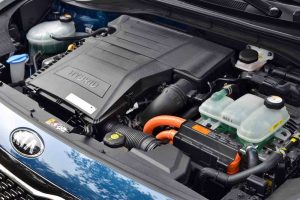 The Niro is to hybrids as the starship Enterprise flown in the movie reboots is to the original Enterprise used in the ’60s TV series.

A six-speed, dual-clutch automated manual transmission paired up with it . . . vs. a continuously variable (CVT) automatic.

What does it all mean to you? 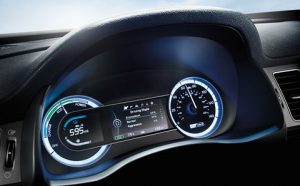 It means that even though the two cars have roughly the same size gas engines (1.6 and 1.5 liters, respectively) and tout about the same rated total power output – 139 hp for the Niro vs. 133 hp for the Prius C  – the Niro is much quicker.

It can get you to 60 in a bit more than 8 seconds, which is right there with most current four-cylinder-powered/non-hybrid sedans.

But the Prius C needs almost 12 seconds to make the same run.

That  is a big difference, and it comes without cost – as far as mileage, at least. The EPA rates the Niro at 51 MPG in city driving and 46 in the city vs. 53 city, 46 highway for the Toyota. 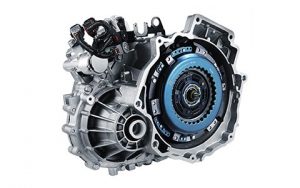 That’s a negligible difference. And in real-world driving (as opposed to the EPA’s testing) the Niro may do better than the Prius C. During a weeklong test drive, I averaged an amazing 56.6 MPG.

The main detraction vs. the Prius C is that the Niro costs $2,740 more to start than the Prius C. All those technical upgrades don’t come free. As always, speed – and economy – come down to money.

How fast do you want to go?

Pre-Niro, there was a class divide among hybrids. The affordable ones – the ones that made economic sense, like the Prius C – didn’t move. Whatever you saved at the pump, you paid for – dearly – on the road. Pedal car acceleration, accompanied by lots of unhappy noises coming from the overtaxed engine and straining-to-supplement-it electric motor.

And the ones that could move cost too much (or drank too much) to make buying them any more economically sensible than buying a Tesla.

They were – and still are – for affluent people who want to Preen Green, don’t have to sweat the cost of the car – much less the cost to feed it  – and aren’t going to put up with a slowmobile.

The Niro is interesting because it bridges this gap. You get high mileage, an affordable price – and it moves.

Pulling out from a side street or building up to speed on a freeway on ramp does not require given’ ‘er all she’s got, Cap’n. There is power on tap – and in reserve.

Floor it if you want to. But it’s not necessary to do so.

That three seconds of difference to 60 (vs. the Prius C) matters more than the stats may convey. It is the difference between feeling confident about your car and feeling overwhelmed by other cars. Keep in mind, too, that the published 0-60 times assume just the driver on board. With a couple of passengers on board, a slowmobile like the Prius C can take 12-13 seconds to achieve 60 -and that can be harrowing when swimming wth the big fishes. 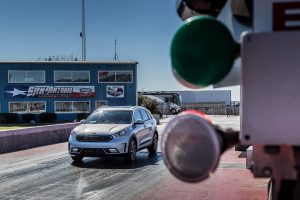 The Niro is also quieter.

Partial credit for this is due to having enough guts – and so not having to keep the pedal held to the floor, constantly, just to keep the poor thing moving.

But the other half of the equation is Kia’s choice of transmission.

Instead of the usual – and usually noisy – continuously variable (CVT) automatic transmission, the Niro has a six-speed automated manual. The advantage here is the transitions; first to second (and second to third) lowers engine speed as the car speeds up. In cars with a CVT, the engine revs furiously to the upper reaches of the tach – and is held there until the driver backs off the accelerator. 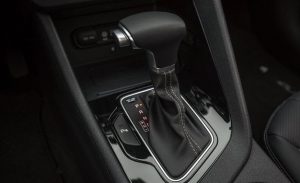 This is how CVTs work.

There are no “steps” in between gears because there are no gears; instead, just an infinitely variable ratio (determined by offsetting pulleys inside the transmission) which effectively amounts to a single forward range. This is great for economy – because it keeps the engine operating closer to the RPM most conducive to maximum mileage  – but if the engine is horsepower-shy, the tendency is for the engine to scream like a mule being sodomized by a crazed hillbilly when anything less than eggshell pressure is applied to the accelerator pedal. 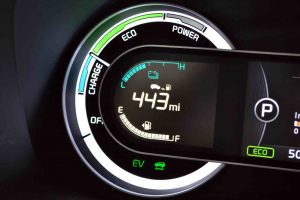 Also, Kia set up the regenerative braking system – a hybrid staple that translates the kinetic energy of motion into “free” electricity by using the brakes as generators, powered by deceleration – to be less noticeable to the driver. In most hybrids, you feel the drag – and hear the noise.

In the Niro neither are noticeable; it slows and brakes like any other car. Corners like one, too. It’s not a lurching, over-heavy (and under-powered) oaf – which many hybrids are, when asked to move quickly, laterally.

Only the gauges give away the Niro’s hybrid underthings. 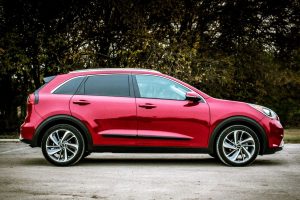 Kia touts the Niro’s appearance as being “un-hybrid” – which is exactly right.

Selling hybrids is not unlike selling Porsches. Image matters. It’s not the same image, of course. But that’s not the point. The point is that people who buy hybrids generally like to advertise the fact.

Or, ask Honda – which tried the “un-hybrid” thing before Kia, with the hybrid Civic – which looked like a regular Civic. 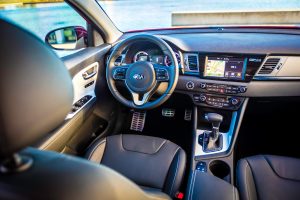 So, this will be interesting.

One thing Kia has done differently is to go crossover. The hybrid Civic was just a Civic with a hybrid drivetrain. Other than its hybrid drivetrain, it didn’t have much to offer. The Niro has other things to offer.

But also, space. And a degree of all-weather capability, too.

The SUV-ish layout allows 19.4 cubic feet of cargo capacity behind the second row – vs. 17.3 for the Prius C. With it second row folded, the space available opens up to 54.5 cubic feet, more than the Ford C-Max (52.6) and more than the uber space-efficient Honda Fit (52.7 cubic feet; 16.6 cubes behind the back seats). 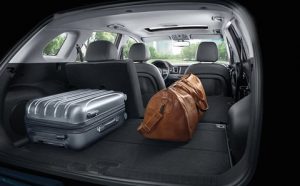 The regular Prius has slightly more space – 19.4 cubes behind its second row and 54.5 cubic feet with them folded flat. But it’s also a much longer vehicle – 178.7 inches bumper to bumper vs. 171.5 inches for the Niro.

It’s also not as tall. Because it’s a car.

You sit higher up in the Niro – and higher off the ground, too. The Kia has 6.3 inches of ground clearance, an inch-plus more than either the Prius C or the regular Prius and the C-Max, too. It may not sound like much, but in winter weather, such differences do matter.

While none of these contenders offer all-wheel-drive, the Niro is the only one that has six-plus-inches of air between the pavement and its nether regions. 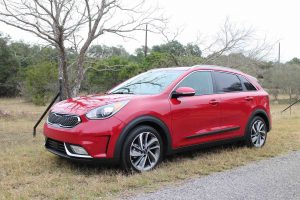 One of the interesting – and cost-saving – features of the Niro is that there is no 12V starter battery. Instead, the car’s hybrid battery pack also starts up the gas engine. This makes great sense – and saves you the down the road expense (and hassle) of having to replace the 12V battery every three or so years. It also takes off about 60 pounds of deadweight.

Another neat feature is the “driver-only” AC setting. Instead of wasting energy to cool the passenger seat – when it’s empty of a passenger – you push the button and the AC system focuses its attention on you. 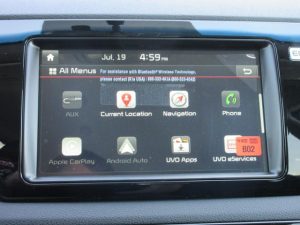 Word is that next year Kia will add plug-in capability, which will let you drive farther on electricity only and also let you recharge the battery pack without running the engine. Depending on how far you to drive to get where you’re going, you might be able to drive the Niro without burning any gas at all.

And the plug in should be even stronger and so, quicker.

The downside is it will probably costs a few thousand bucks more than the current model.

This hybrid doesn’t suck gas – or suck to drive. Or suck your wallet dry to buy it, either.

That ought to work – provided enough people don’t object to not wearing their hybridness on their sleeves.