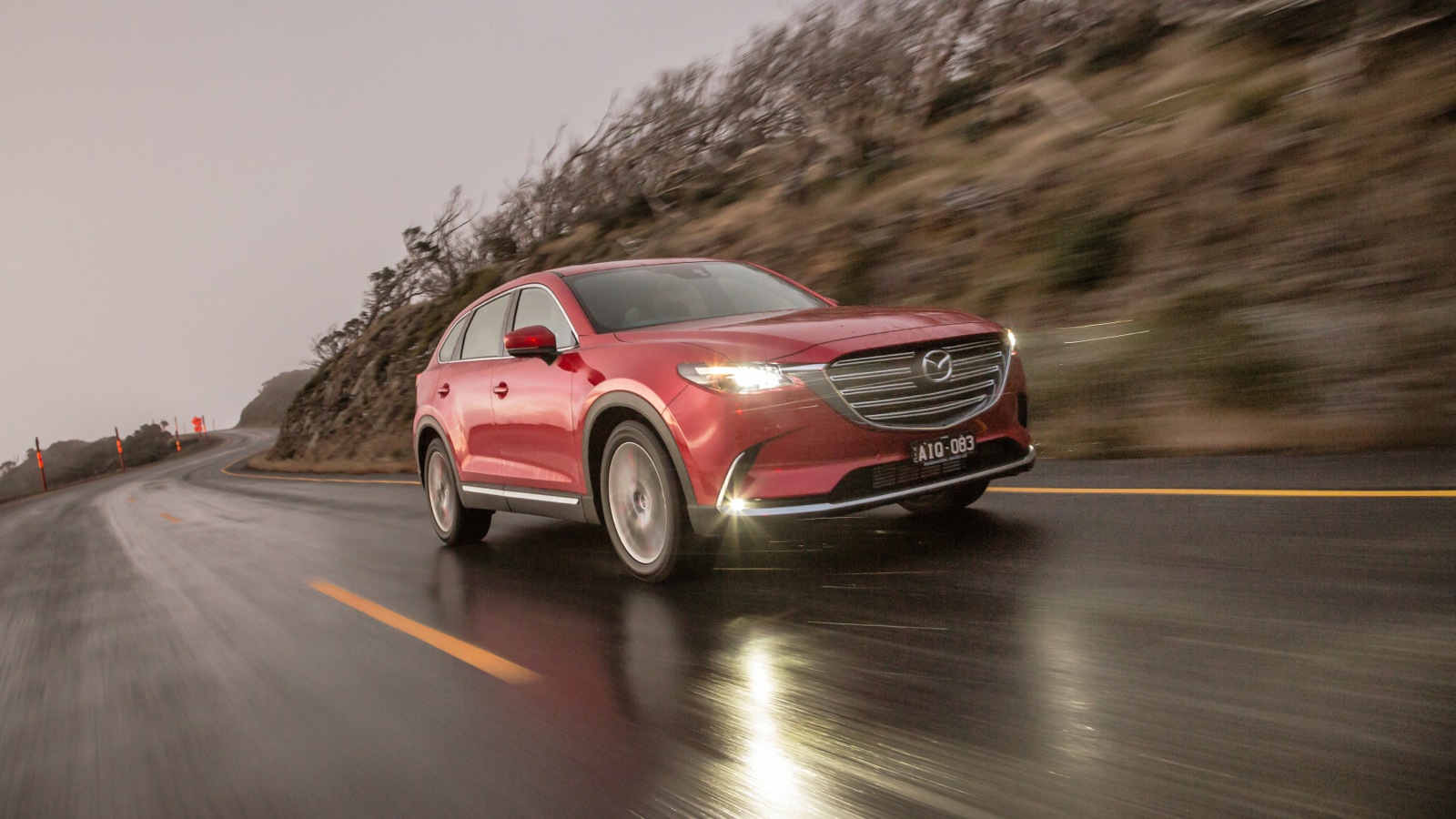 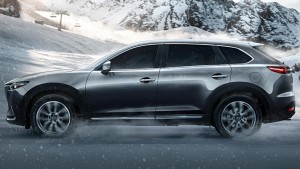 The answer is surprising.

It’s surprising because Mazda is the “zoom zoom” brand – and four cylinder engines are not generally known for having much of that.

Particularly when installed in a full-size (three row) crossover SUV like the CX-9.

It is the only big crossover SUV that doesn’t at least offer V6 power. Several of its rivals – models like the Honda Pilot and Hyundai Sante Fe – come standard with V6 power.

None of the others are four cylinder-only.

But is this a bad thing?

Or a practical thing?

And is that a good thing? 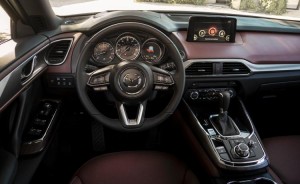 The CX-9 is a full-size/three-row crossover SUV – like the Honda Pilot, Ford Explorer and Hyundai Sante Fe, among others.

Like them, it has a lot of space for people and cargo.

You can go FWD or AWD.

But, you can only buy a CX-9 with a four cylinder engine.

The others all offer – or come standard with – a V6.

Mazda’s thinking – which is contrary to its previous thinking –  is that most people who buy plus-sized family-haulers like the CX-9 don’t need the superfluous power of a big V6, but might like the better mileage a smaller four is capable of. 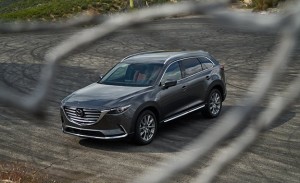 It’s a bold – and risky – move for a brand that’s (up to now) been all about emotion in emotion.

Base price is $31,520 for a FWD CX-9 Sport; adding all-wheel-drive bumps the MSRP to $33,320. There are are also Touring and Gran Touring trims, with the range topping out at $44,015 for a Signature trim with AWD and luxury-class amenities, including real Rosewood trim plates and premium leather upholstery. 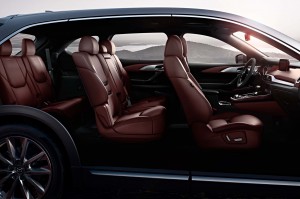 It’s lighter – and smaller than before.

It also has less engine.

The previously standard 3.7 liter V6 has been retired in favor of a 2.5 liter four. It’s turbocharged, to make up for its small size – but horsepower is still down vs. previously: 250 hp (on premium; the number drops to 227 if you feed it regular) vs. 273 before.

On the other hand, fuel efficiency is up – and acceleration is slightly better.

More on this below.

There’s also a new look – with themes now lined up with other newer Mazda models like the 6 sedan. 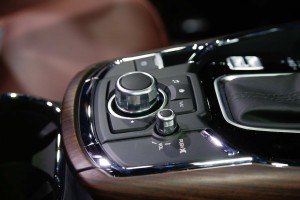 No real perfomance penalty as a result of the engine downsizing.

About the same room in all its rows for people as rivals offer in theirs. 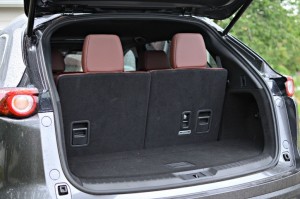 New engine is torquey… but not very punchy.

If you “zoom zoom,” expect real-world mileage to be about what you’d get with a big V6.

Less cargo room than before.

Signature trim costs almost as much as an Audi, Lexus, Infiniti, or Acura… but it’s still a Mazda.

When something is inevitable, fighting it is pointless. Better to accept – and make the best of it. 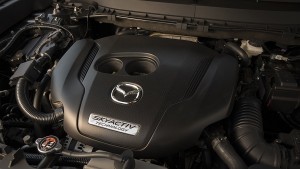 This appears to be at least one half of Mazda’s thinking with regard to the decision to nix the CX-9’s V6.

To nix sixes across the entire model lineup.

About the same engine – displacement-wise – in a vehicle that displaces about twice as much.

But, the CX-9’s engine is turbocharged – which makes up for the lost cylinders (and displacement) when you put your right foot down. It makes as much as 250 hp (and 310 ft.-lbs. of torque) when fed premium gas.

On regular, the horsepower dips to 227 (but the torque number stays the same). 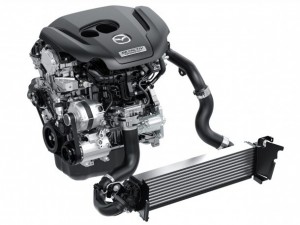 These are not bad numbers. And neither are the other numbers – acceleration and miles-per-gallon.

Mazda did some customer driving habits surveying and figured out that most people who buy rides like the CX-9 (which isn’t a Miata) tend not to wring out the engine. Specifically, they discovered that most family-mobile drivers rarely spin the engine above 3,500 – implying a need for strong mid-range torque rather than high-RPM power. 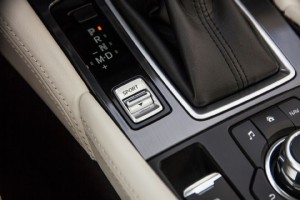 And it was very thirsty.

The previous CX-9 consumed oceans of fuel: 16 city, 22 highway for the AWD-equipped version. That is worse mileage than a V8-powered Chevy Tahoe (16 city, 23 highway) and – more relevant – much worse than segment rivals like the Explorer, Acadia, Pilot and Sante Fe.

If the old CX had been quick (like the twin-turbo V6 Explorer, for instance, which nails 60 in just over six seconds) the atrocious mileage could be forgiven. But the old CX-9’s 0-60 run was mid-pack at best.

The new CX is still mid-pack, as far as acceleration – but it is now among the most fuel-sippy large crossover SUVs on the market: 22 city, 28 highway for the FWD version and 21 city, 28 MPG for one with AWD. 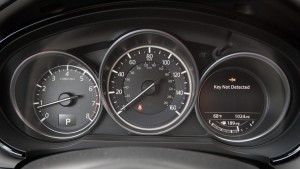 So, Mazda may be on to something here.

The new CX-9 isn’t the fastest and most furious of the bunch. But it’s not a gas hog or a road turd, either.

It may be just enough. Which could be just the ticket.

At least, in theory. 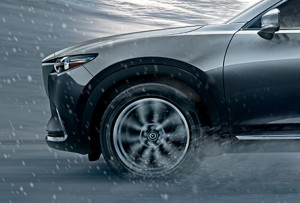 I averaged just over 20 MPG during a week in the CX-9.

Granted, I drive faster – and harder – than most.

The turbo four’s mileage was disappointing. You may have the same experience. Small displacement turbocharged engines sound like the proverbial free lunch … on paper. You get the potential fuel efficiency of a small engine if you can keep your foot out of it – and power on demand, when you need to slingshot into traffic or get around a slow-moving Clover.

But the gas mileage advantage part of this deal only comes through if you avoid asking the engine for power.

Which is like trying to lose weight while living right next to an ice cream store. 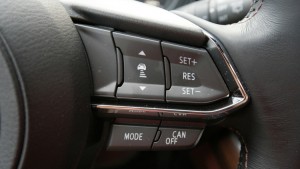 It’s right there, after all.

And if you do indulge – the turbo, I mean – you can expect to get about the same mileage as you would have with the larger engine. Which wouldn’t need the turbo to make the power when needed.

Which is better? The simpler (and probably less expensive and more long-term reliable) if thirstier-on-paper V6?

Or the more expensive and complicated – and just about as thirsty if you use it – turbo four?

Well, no matter how we feel about it, small turbo fours are the future. 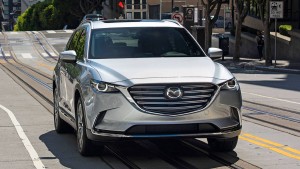 Regardless of the mileage we get in real-world driving.

It’s the mileage these things post on the EPA’s test loop that matters as far as helping a car company meet the government’s Corporate Average Fuel Efficiency mandatory minimums.

Thankfully, Mazda did not go Full Monte and pair the four with a continuously variable (CVT) automatic. These are also becoming popular because they are a bit more efficient (on paper) than a conventional automatic like the Mazda’s six-speed.

CVTs are also noisier – or rather, they make the engine noisier – by screaming it to high RPM (and holding it there) during acceleration runs. An automatic like the CX-9’s with fixed forward gears, lowers engine speed with each successive upshift – reducing engine noise.

The transmission has manual (driver controlled up and downshifts) as well as Sport and Normal modes, with Sport mode particularly noticeable when descending a curvy road. It’ll hold third or fourth, providing an engine braking effect, rather than up-shifting to fifth or sixth (and forcing you to ride the brakes). 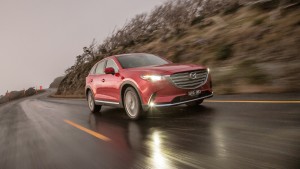 The four has a nice mid-range, as Mazda intended. This is not a revvy engine. Redline is 6,000 (low, for a Mazda engine) and the computer usphifts the transmission well before it reaches redline – at around 5,600-5,800 RPM.

Even in manual mode.

But this is in line with reality.

Because the CX-9 is not a Miata.

Same goes for the handling. The emphasis here – the racy looks notwithstanding – is on ride quality. Which is very calm but not very “zoom zoom,” either. 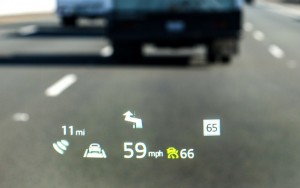 The CX-9 is for going to Disneyland. Or the water park.

In keeping with this,  the electrically assisted steering is very light – and is further assisted (in Grand Touring and Signature trims) by a Lane Keep Assist system with a steering nudge feature that semi-steers the car automatically. You’ll feel a light vibration if you wander over the double yellow lines to snap you back into attention – and the wheel itself will turn a little on its own to keep the car tracking straight within its lane.

It’s not set up for driving fast, but it is a pleasure to drive – especially on long (boring) highway trips.

Which is just what Mazda intended.

Because it’s what most buyers are looking for, whether they realize it or not.

So long as the thing looks like it has a pulse. 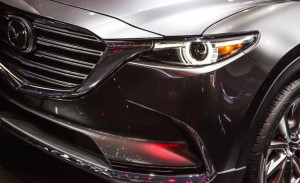 While the CX-9’s power/performance don’t especially get your motor running, its appearance just  might

This is a good-looking thing – which is a rare thing in this class.

The others aren’t ugly. But they aren’t exactly sexy.

Like the Mazda6 sedan – which seems to have been the stylistic inspiration for the new CX-9. The front clips are similar and the two share the suggestive curvature that almost makes you want to run your fingers along the flanks. Whoops. I have to remember I’m not writing for Penthouse Forum. 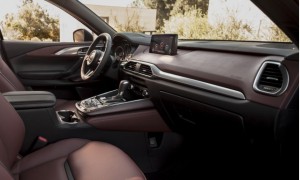 Anyhow, the point is it looks really nice.

Part of the trick being to increase the wheelbase relative to the length. The new CX-9 is 199.4 inches long overall, with a 115.3 inch wheelbase. The previous CX-9  was 200.6 inches but had a much shorter (113.2 inch) wheelbase. Pushing the axle center lines farther apart helps ride quality but has the additional perk of making the vehicle look higher-rent. Like high-end sedans, for example – all of which are long wheelbase things.

A long wheelbase also usually means a bit more usable interior space – especially if the overall length of the thing is about the same, as it is here. 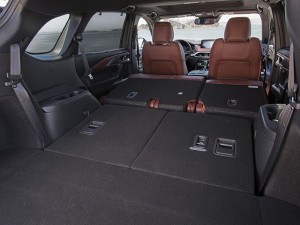 However, the new CX – while it has about the same first and second row space as before – has a lot less space for cargo behind its third row: 14.4 cubic feet vs. 17.2 cubic feet. And with both the second and third row down, the total space available is only 71.2 cubic feet vs. 100.7 cubic feet before.

On the upside, the third row – while still cramped – is now more viable for other-than-ten-year-olds. It’s not exactly adult-friendly back there. But it is adult-usable.

Also, the new CX’s cargo stats are par for the class.

The Honda Pilot is one of the few that has a lot more space than all of these: 18.5 cubic feet behind its third row and 109.2 cubic feet overall. The Pilot is also – interestingly – only 194.5 inches long overall, or about half a foot shorter than the CX-9.

But, the Honda is about as sexy as Hillary Clinton. 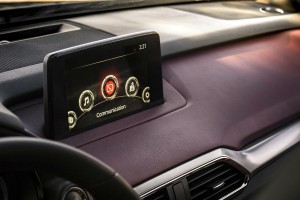 Standard amenities include 18 inch wheels, three-zone climate control, surround-sound audio rig and a “floating” seven-inch LCD touchscreen as nice as any you’d find in a BMW. 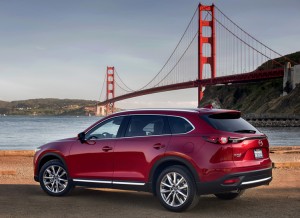 If you need SUV-ish towing capacity – or muscle car acceleration – the Ford Explorer has the edge.

If you need maximum cargo room, the Pilot’s at the top of the list.

But perhaps you don’t really need any of those things.

Or, need less of them.

And want more of other things.

This is a daring experiment. And maybe a very smart move.

Mazda has made a more practical CX-9 that doesn’t look it.

The others strut around hugely – or have huge power. But are either really necessary?

On the other hand, everyone likes to look good.

Sexy is always in.

And the CX-9 has that to spare.