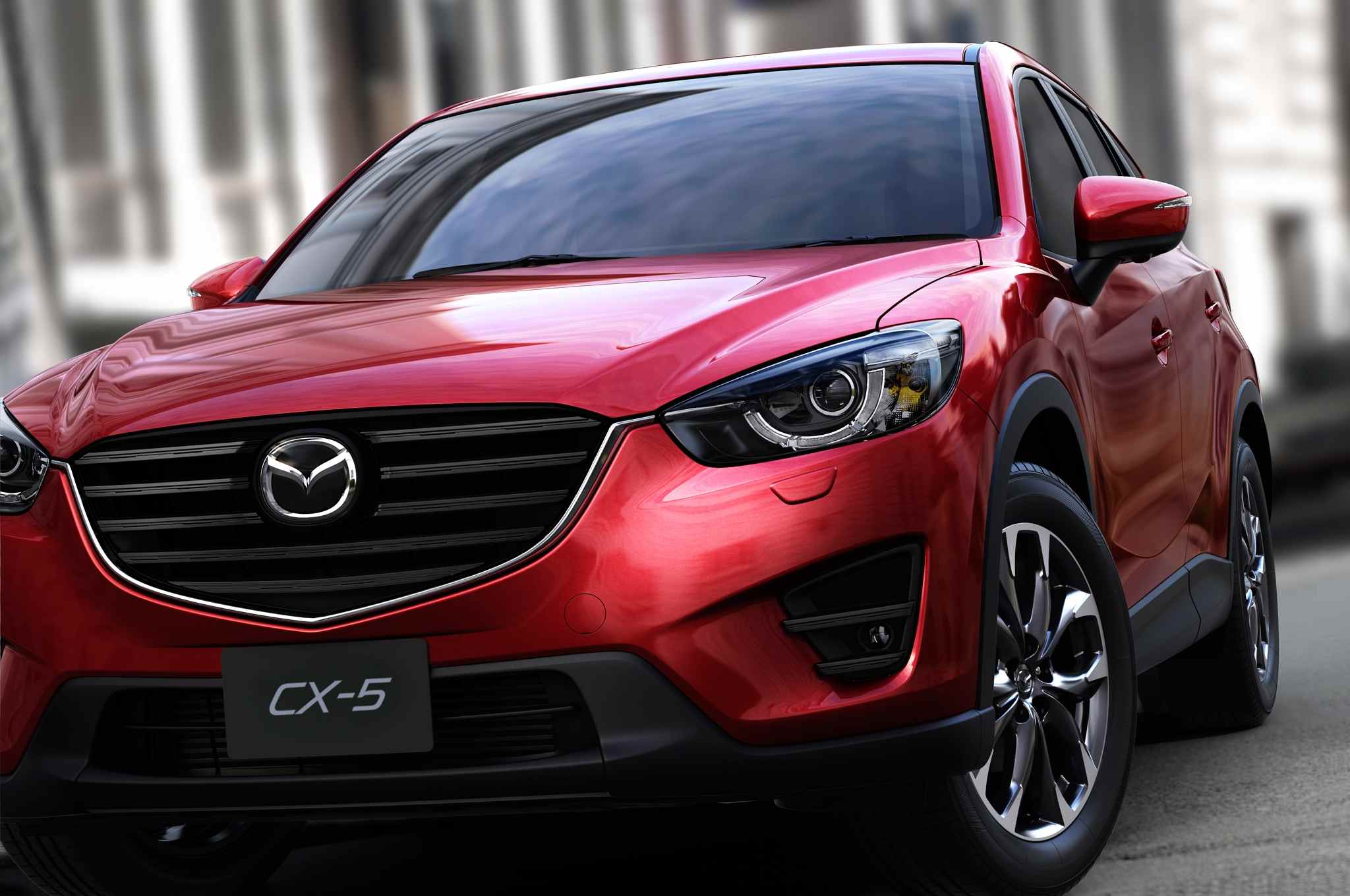 Crossover SUVs are like M&Ms in a bowl. Lots of different colors, but they’re all pretty much the same. 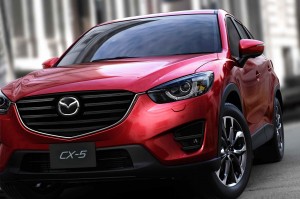 With a few exceptions.

There is this Mazda CX-5, for instance.

It is one of the almost-nil vehicles of this type that you can still buy with a manual transmission. The other major players – models like the Honda CR-V, the Toyota RAV4, the Ford Escape and the Hyundai Sante Fe Sport –  are automatic only.

The Mazda also gives you a choice of engines.

Most of the rest come with just one – take it or leave it.

It’s also one of the easiest on gas models in this class – even with its optional (and higher-powered-than-most) engine.

Lowest MSRP, too – and not by a couple hundred bucks, either.

Try a thousand-plus bucks. A couple thousand bucks, in some cases (shame on you, Hyundai Sante Fe).

The CX-5 is Mazda’s offering in the compact crossover SUV class. It has two rows, seats five and is generally similar in layout and concept to rivals like the Honda CR-V, Toyota RAV4, Ford Escape and Hyundai Sante Fe Sport.

And unlike most of them, you can get a CX-5 with your choice of engines, too. 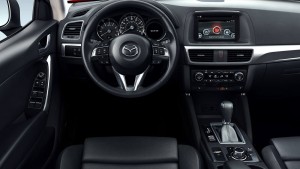 Base price is $21,795 for a FWD Sport with a six-speed manual transmission and 2.0 liter engine. An AWD-equipped Sport with the larger 2.5 liter engine and six-speed automatic lists for $24,445.

The most expensive version of the CX-5 is the Grand Touring with AWD (and the 2.5 liter engine/six-speed automatic). 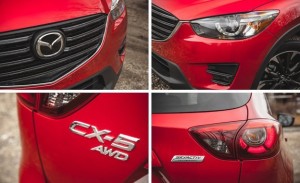 One of the few entrants in this class that starts out lower – and can also be had with a manual transmission – is the Jeep Compass. Base price (with five-speed manual) is $18,995 ($2,800 less than the CX-5) topping out at $26,290 for a High Altitude trim with what Jeep styles “4WD” – but it’s really AWD, like the others in this class.

Most puppy-like of the bunch; it wants to play!

Exceptional gas mileage – even with the optional (high-powered) engine.

Costs less than most rivals.

Six-speed manual restricted to base 2.0 engine, which isn’t available with AWD.

Audio-infotainment interface looks cool but isn’t as easy to use as other systems. 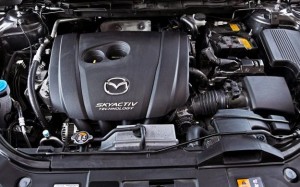 Most of the crossovers in this class give you the choice of FWD or AWD – but  not which engine (or transmission) will drive those wheels.

The manual is restricted to the 2.0 engine (models with the 2.5 engine come with the six-speed automatic) but having the choice is nice – and not solely because (for some people at least) a manual-equipped vehicle is more fun to drive.

It is also cheaper to drive.

The CX-5 2.0’s base price is significantly lower than the base prices of almost all of its rivals – and not by a small amount. 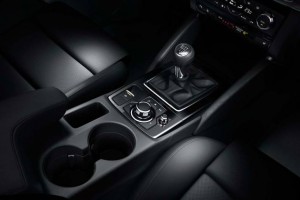 It’s true the RAV4 and CR-V’s standard engines are larger – and stronger. But it’s not a huge difference in either hp (25-30 hp) or acceleration. The 2.0 equipped CX-5 gets to 60 in about 9.2 seconds, dead heat with the RAV4 and only slightly less quick than the 2.5-equipped/FWD CR-V (8.7 seconds). Both the RAV4 and the CR-V are several hundred pounds heavier than the CX-5, which explains the close race, despite the on-paper power advantage the Toyota and the Honda seem to have.

The catch is that you can’t get AWD with the 2.0 engine – or the automatic transmission (if you want that).

Even so, the CX-5 with its optional 2.5 liter engine and the six-speed automatic still costs hundreds less than the RAV4 and the CR-V and it is much quicker than either of them: Zero to 60 in 7.7 seconds for the FWD version and about eight flat with the optional AWD.

You might also want to take a look at the Jeep Compass – which is less expensive and offers a manual as well as two available engines and a more rugged AWD system (with a “crawl” mode for off-road). But it’s a much less sporty – and much more thirsty (20/23 with the optional engine and “4WD”) ride.

The Ford Escape is another “possible.” It’s sporty – and it offers more than one engine. However, if you want AWD, you haver to buy the SE trim, which lists for $27,400 (with AWD). That’s a $4,205 difference in price – which makes a direct comparison unfair. 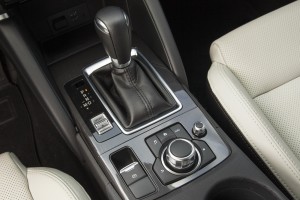 To be fair to both the Escape and the Sante Fe Sport, they are both available with powerful turbocharged engines that give them quickest-in-class acceleration. But, as you’d expect, you pay to play.

The Sante Fe Sport and Jeep Compass can pull up to 2,000 lbs. when properly equipped. 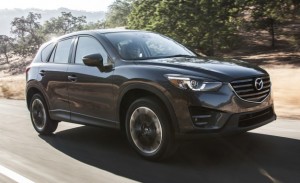 Most of the crossovers in this segment are excellent appliances. Ideal for carrying the kids around, picking stuff up, going on trips – dealing with snow days.

The CX-5 is ideal for all of those things – plus other things.

The Honda CR-V and the RAV4 (much less the Compass) are not meant for such. They haven’t got the speed and they haven’t got the reflexes. The CR-V’s CVT transmission, for example, is designed for maximizing fuel efficiency. It does not do rev-matched downshifts or throttle blips. You also get 16 inch steel wheels – vs. the 17 inch alloys that are standard equipment with the CX-5 (you can go all the way up to nineteens).

The RAV has decent power, but it’s heavy and soft, like a 38-year-old ball player  in his last year in the majors – vs. the 23-year-old just tapped from AA. It leans (and squeals) much sooner. The Traction control can’t be turned off unless you stop first – and comes back on whether you’ve asked it to or not. 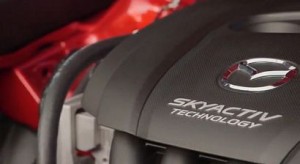 The Mazda’s throttle tip-in (how quickly the engine reacts to your right foot’s inputs) is exceptionally sharp. As is the steering. As are the shifts (in Sport mode). The high compression (13.0:1) Sky-D 2.5 liter engine is also much more responsive than the mere hp numbers indicate. A 13.0:1 CR was once the exclusive feature of race cars fed race gas. Mazda engineers made a street engine with 13.0:1 compression that runs on regular unleaded gas, too.

The crossover SUV concept to a great extend preordains the general shape – and so, looks – of these things. Tall, hatchbacky wagony. But the CX-5 gets some aesthetic character from handsome car cousins like the Mazda6 sedan. The front clip is very similar to the 6’s: low long and curvy. It’s enough to add character – and brand identity – to a vehicle in a class of vehicles that are often very hard to tell apart from 50 yards out. 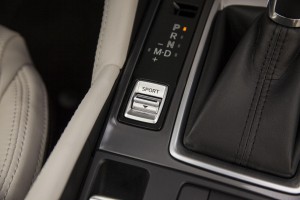 Inside’s perky, too. A Miata-esque gauge cluster and available real carbon fiber trim nicely offset by the judicious use of real chromed metal switches (as for the six-speed automatic’s Sport mode) instead of black – and plastic – ones.

Lots of times – most of the time – the most fun vehicle in a group is the least practical vehicle in the group. Gimped in some way. Cramped back seats, for instance. Or a too-small trunk.

As with the drivetrain, though, there are no such prices to pay in terms of the CX’s interior space, general usability and everyday livability.

It actually has a roomier back seat than the RAV4 and the CR-V (39.3 inches for the Mazda  vs. 38.2 inches for the Honda and 37.2 inches for the Toyota… and 36.8 for the Ford). The Sante Fe Sport has slightly more second row legroom (39.4 inches) but that’s a difference without much distinction. 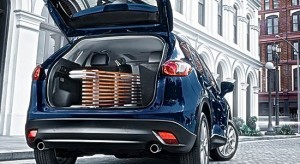 The Compass comes in last with just 22.7 cubic feet of space behind its second and 62.7 cubes with the second row folded.

The LCD touchscreen is good-sized (seven inches, among the largest in this class) and looks high-tech but is less easy to use than some of the systems in rivals like the RAV4 and CR-V. The Mazda unit sometimes requires more steps to access a given function – or accessing the function is just less user-friendly. There’s a rotating and pushbutton mouse on the center console to engage some of the functions and others (like the stereo channel selection inputs) are controlled via the touchscreen.

It takes some getting used to. 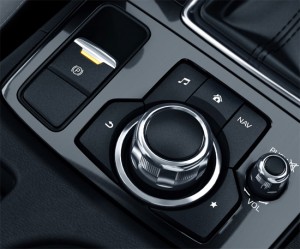 Mazda offers some neat factory/dealer accessories such as a ski/snowboard carrier, a surfboard carrier and the option to buy a portable Garmin navigation system that’s not tied to this particular car (and much less expensive to update or just replace than traditional built-in GPS systems).

Adaptive cruise control and an automatic braking system that stops the car if you don’t in an emergency – such as a car stopped suddenly in front of you that you don’t notice in time – can be ordered optionally, too.

It’s all about what you want. 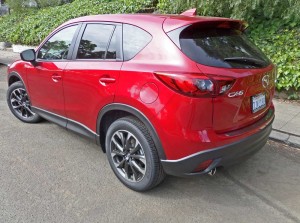 Because as athletic as the CX-5 is, it’s also as everyday-friendly as the others. The ride is not stiff – and the gas mileage still good. You sacrifice nothing to enjoy the bigger personality, the readiness to make tracks.

For less money than the competition.

Let’s not forget the CX’s available manual transmission, either.

Six more ways to have fun in this thing (the Jeep Compass – the only other one in this class that offers a stick- only has five – and is vice president of the Slow Movers Club; 10.2 seconds to 60 MPH).

Maybe the best thing about the CX-5, though, is that no one suspects. Not your insurance mafiosi – not The Man.