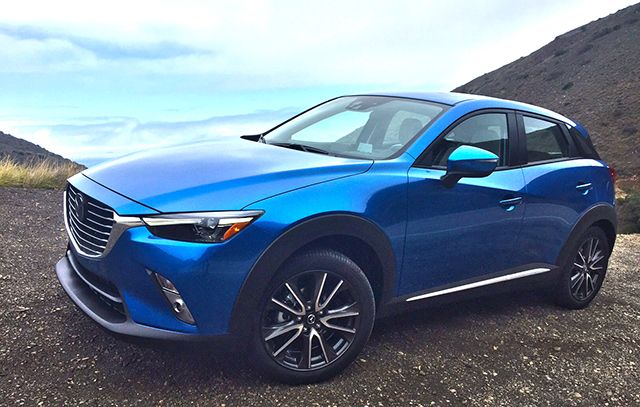 The next thing in crossovers is … smaller crossovers. 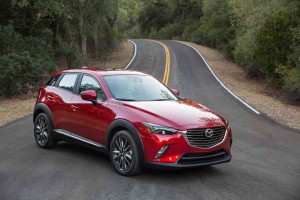 Honda led the way earlier this year when it introduced the HR-V, which is basically a smaller-scale take on the very successful (mid-sized) CR-V. It gives Honda buyers who want a CR-V, but less of it, a vehicle that fills the bill.

Mazda’s counterpoint is the CX-3.

Like the HR-V, it is also a subcompact crossover SUV and offers all-wheel-drive. But unlike the Honda, which emphasizes practicality (it has the most interior space – including twice the cargo space) the CX-3’s all about style and performance.

Handling, especially  – at which it excels.

But, as a result, it’s … less practical than the HR-V. 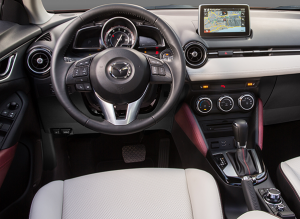 Which is a good thing, because it gives you a real choice for once.

These are two very different rides, even though they are rivals.

An alternative to the HR-V.

Something that appeals more to the emotions than the roomier but stuffier (and much slower) Honda.

The CX-3 looks a lot like the Mazda3 hatchback but stands taller – and unlike the front-wheel-drive-only 3, you can order the CX-3 with AWD.

Unfortunately – and unlike the 3 – you cannot order the CX with a manual transmission. Strangely, the sportier-in-looks Mazda is automatic only while its less racy-looking (and much slower-moving) Honda rival can be ordered with a six-speed stick. 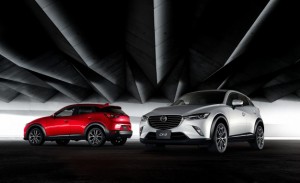 The CX-3 is the latest addition to Mazda’s lineup. 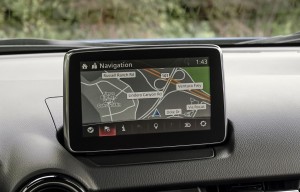 No manual transmission option(for us).

Regardless of trim and whether you go FWD or AWD, all CX-3 come with Mazda’s 2.0 liter “SkyActive” (basically, very high compression) four cylinder paired with a conventional (not CVT or automated manual) six-speed automatic. 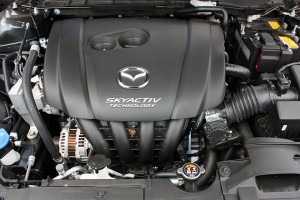 The engine is similar to the 2.0 engine used in the CX-3’s car cousin – the Mazda3 – but the tuning is very different.

Credit the 13.0:1 compression ratio, which helps the engine make big torque (for its size) and sooner (and without a turbocharger). 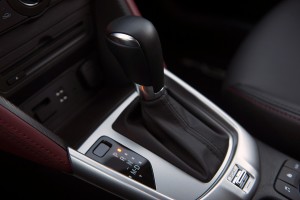 The torque, especially, makes the CX-3’s 2.0 engine tractable when paired with an automatic – which is a good thing because it’s the only thing you can pair it with. Probably because of government fuel efficiency requirements. The tests are easier to score higher on with an automatic, which will perform uniformly no matter who the driver is and which can be programmed to shift in such a way as to optimize the EPA numbers. The CX’s automatic also has not one but two overdrive gears. Fourth is 1:1 while fifth takes it up to .708 and in sixth, the ratio is down to .59. That’s deep overdrive gearing.

Proof of the automatic’s advantages is furnished by the automatic-equipped CX-3’s numbers – which are better than the numbers achieved by the manual-equipped Honda HR-V: 29 city, 35 highway (with FWD) vs. 25 city, 34 highway for the Honda (also FWD). 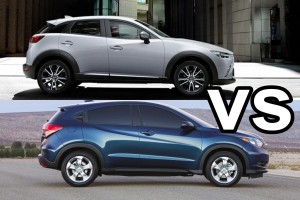 With its optional CVT automatic, the Honda almost (but not quite) matches the automatic CX-3’s numbers: 28 city, 35 highway.

But it can’t match the Mazda’s performance numbers.

The HR-V is slow.

It takes the Mazda about 8.4 seconds to get to 60 (FWD versions; the slightly heavier AWD version requires another tenth or so) vs. nearly 10 seconds for the Honda. 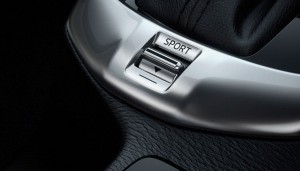 Another factor hobbling the Honda is the double punch of low torque (127 ft.-lbs) that doesn’t get made until 4,300 RPM. That combo is not the ticket with the optional CVT automatic.

Which is probably why Honda offers a manual.

It at least makes the HR-V feel a little quicker than it is. Even if it’s still much slower than the CX-3. 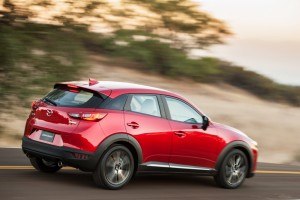 Reading the above, you may be surprised to hear me kvetch about the CX-3’s one-size-fits-all powertrain.

But given the hot-to-trot looks of the CX-3 (and expectations accompanying) it’s hard to grok why Mazda chose not to offer a manual transmission in this thing.

Or (as in the Mazda3 hatchback sedan) an optional engine.

The absence of the stick is almost certainly a function of CAFE (government fuel efficiency) ukase. Probably also it’s the reason for the absence of the Mazda3’s optional 2.5 liter, 184 hp engine as a CX-3 option.

But then, I went and read the specs. As it turns out, the Mazda3 with the 2.5 liter engine and six-speed manual manages a pretty spectacular  25 city, 37 highway. These are better numbers than the 2.0/automatic-equipped CX-3! 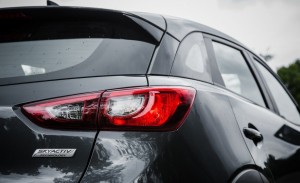 With the 184 hp engine the CX-3 (which actually weighs less than the Mazda3) would be a missile. At least, it would be about three seconds quicker to 60 than the HR-V and that would (and should) embarrass Honda. Even more important, it would likely draw aways sales given the much quicker (and much better-looking) Mazda would still give you as good or better fuel economy as the slow-motion HR-V.

Hopefully, someone at Mazda will read this.

The high-compression 2.0 liter SkyActive engine likes to rev, as high compression engines tend to. The decent torque spread provides good low-speed and mid-range thrust, too. The Honda has to work harder to achieve comparable speed. Both, however, begin to get winded once you’re up to speed. Floor the accelerator at 70 and not much acceleration occurs. It takes a while to achieve 100 and there’s not much beyond that.

Not that you’d ever do that, of course.

Where the CX-3 shines most (especially relative to the HR-V) is in the corners. Like all Mazda vehicles, it’s tuned to apex and is eager to do so.  You can get 18-inch wheels/tires from the factory (the HR-V maxxes out with 17s) and the CX-3 also sits lower to the ground by about half an inch, which also helps.

Of course, neither the decreased ground clearance nor the increased width wheels/tires are helpful in the snow – which is where the HR-V outshines the CX.

You pays your money and you takes your choice. 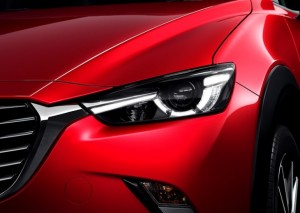 One area of aggravation with the CX is the e-clutter generated by the car’s array of “safety” systems. In particular the optional (thankfully) i-Activesense package that includes a forward collision-mitigation system that automatically applies the brakes when an object is sensed in the vehicle’s path and the driver doesn’t apply the brakes when the computer thinks he ought to.

Be aware that threes systems are typically (as here) over-cautious to an absurd (and distracting) degree. A deftly performed break left/accelerate/pass-a-slowpoke move, for example, can trigger a frantic light (and sound) show if the computer thinks you cut it too close. Which means, you didn’t leave a car length’s distance between you and the car you just passed.

The Safety Cult will be the death of driving fun. 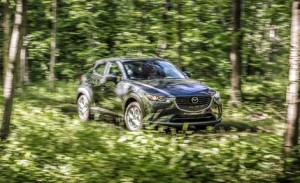 Also, the systems – which emit radar/laser even when you’ve depressed the “off” buttons – wreak havoc with radar detectors. The current state of detector filtering software is still not good enough to filter out – and disregard – the K band radar and laser signals (which cops also use) generated by the car. So you get multiple – and perpetual – false alarms.

This renders the detectors effectively useless, which renders you vulnerable to cop radar – and tickets. It kind of defeats the purpose of buying a car like this.

I’d much rather Mazda would offer a factory-installed radar detector (they’re legal everywhere except Virginia) than make radar detectors useless by fitting the car with all this “safety” crap. 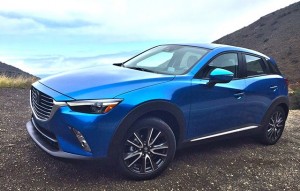 Good drivers don’t need it – and the bad ones don’t buy Mazdas.

If looks matter, it’s no contest.

The CX-3 is the Jennifer Lawrence of its class.  Sleek, curvy in all the right places.

But, like pretty much anything that tugs at you emotionally, there are strings attached.

Like a lack of space inside that sexy shell. 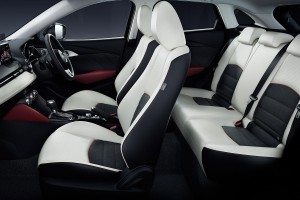 Though they are almost exactly the same overall length (168.3 inches for the Mazda and 169.1 for the Honda) the HR-V has an incredible 4.3 inches more backseat legroom (39.3 inches vs. 35 for the CX) and twice the cargo room behind the backseats (24.3 cubic feet vs. a Miata-esque 12.4 for the CX; 10.2 if you buy the Bose audio upgrade, which includes a trunk-mounted subwoofer that chews down the available space that much more).

Even with the second row folded, the CX can’t touch the HR-V when it comes to being capable of carting things around: 44.5 cubic feet vs. 58.8 in the Honda.

But utilitarian motives aren’t why you’re looking at this one, right? 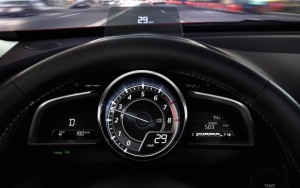 What you like – in addition to the Jennifer Lawrence exterior – is the fighter-jock cockpit of the CX, right down to the fighter jet-esque Heads Up Display – not offered in the Honda – and the large (seven inch) free-floating LCD touchscreen (it’s standard in all trims, too). These features – plus brushed metal trim and aircraft-style ball air vents – add to the CX’s let’s-go-strafe-something vibe. It’d be cool if they included a target crosshair with the HUD.

The rotary knob selector mechanism for the LCD display is not as well-thought-out, however. It takes two steps to do various things that ought to just take one – like change the radio station, for example. First, you have to scroll to the << or >> icons and then you can push the knob to change the station. 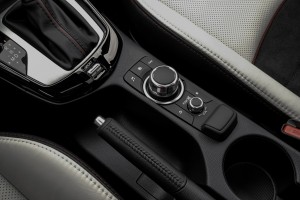 If you’ve followed my rants, you’ll know that Mazda has decided against bringing its superb Sky-D diesel engine to the U.S. – because of the U.S. government’s regulatory burdens. Getting the diesel certified for sale here would either entail too much cost or too much of a reduction in the fuel efficiency of the powerplants – or some of both. Regardless, the government has made it very difficult for anyone to sell a diesel engine in a passenger car that’s not a high-end car (Benz, BMW, Audi) where the cost issues, at least, aren’t such a big factor.

But they are a huge factor for cars in the CX’s price range.

If the “cost of Uncle” is high enough such that it’ll take years to reach the point at which the diesel engine starts to save you money, most people will pass. 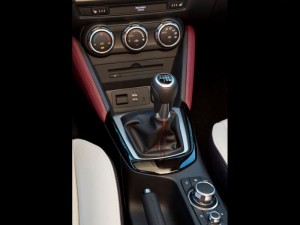 So, no diesel. And no manual transmission.

No optional engine, either.

I mentioned the lesser practicality of the CX-3 vs. the HR-V. Here’s another thing to consider – if you don’t mind even less practicality: The Nissan Juke.

The Juke’s also available with AWD – though the same issues (not much ground clearance, tires meant for dry weather grip more so than fording through the snow) apply. 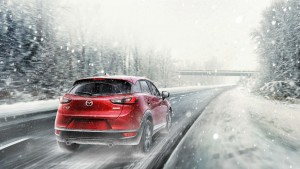 Still, it’s something to consider.

Another one to consider, if you don’t really care that much about AWD –  but do care about a manual transmission – is the Mazda3. Which is so similar in profile and pretty much everything else (except the availability of AWD and the option of an underhood upgrade) that it, too, might be worth a look. The CX-3 stands taller than the Three – 60.7 inches off the ground vs. 57.3 for the Three – but both have exactly the same ground clearance (6.1 inches) so although you sit a little higher, it’s likely a FWD Three with winter tires would do just as well in the snow as a FWD CX-3 with the same tires…

But in the Three, you’d be able to shift for yourself (if you wanted). 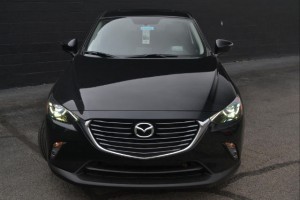 Final thing: Despite its very high compression ratio, the CX’s engine is designed to run best on regular 87 octane unleaded – not premium. This is pat-on-the-back worthy. You get the power – without the expense of a turbo. Or the expense of having to buy premium fuel – as almost all turbo engines require.

It’s nice that Mazda didn’t just stamp out another version of everyone else’s small-scale crossover SUV. Like it or don’t like it, at least it’s different!