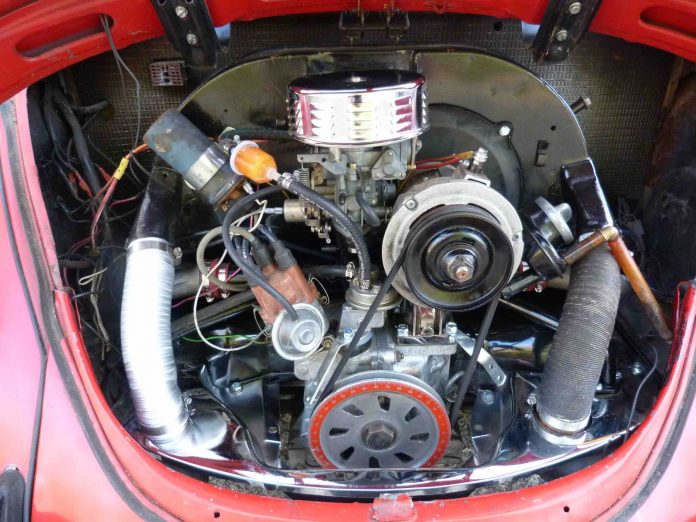 Well, the ’72 Beetle is almost road-ready.

The mechanicals mostly are.

And has heat! A little PB Blaster on corroded cables and some cleaning got the Beetle’s ductwork viable again.

Now it’s on to the brakes/suspension – which may not need much work; will have to pull wheels and have a look. We shall see.

One nugget of info to pass on to those of you out there who might be interested in fiddling with an old Beetle yourselves. This one – a ’72 – came with an alternator. Not from the factory, though. It was added by the previous owner.

Originally, the car had a generator.

Now, this is an important point. If you want full throttle.

Or the right carburetor. 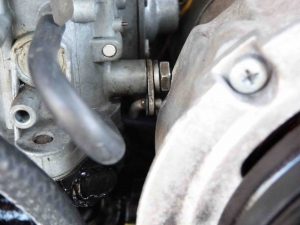 Here’s the problem: The alternator’s case is wider diameter than the factory gennie’s is. This creates clearance issues with the Solex 34 Pict 3 carburetor. Specifically, with the accelerator pump linkage. It rubs up against the case; the throttle is impeded from opening more than about half way.

The rigged “fix” – what the previous owner did – was to install an offset adapter plate (and use the wrong – smaller – 28 Pict carb). This genius being the same genius who used a hammer to smash off the EGR port on the intake manifold, creating a massive vacuum leak he fixed with an old bolt daubed with RTV.

Anyhow, the right fix is easy. Just reverse the accelerator pump cam/linkage, then readjust to get the proper geometry. With that done, you get a full stroke without clearance issues – and without mauling the carburetor or the alternator (some geniuses try to obtain clearance by beating on the alternator case).

It starts immediately, despite the absence of a computer and notwithstanding the fact that it’s carbureted. Pulls strong  – well, for a Beetle. Strong enough to be daily-drivable. It maybe could use richer main jetting to account for the ethanol-adulterated “gas” we’re forced to feed it. But that is easily – and cheaply – dealt with.

That is the magnificence of these old jalopies. A teenage kid with teenaged kid resources can deal with one. A new main jet is $5, maybe. A screwdriver and some gumption are all that’s necessary to install it.

This is true of pretty much everything – every system – that makes the Beetle go. Need a new fuel pump? It’s two 13 mm bolts to take out – and the pump costs $20. It is not located in the gas tank. Does not cost $450 for an “assembly” (as is true of the “fuel pump assembly” in my ’02 Nissan Frontier).

One belt. Shim the thing to adjust.

Three quarts of oil – no filter.

Its owner – my apprentice – will have to learn to deal without ABS and traction control, but this will build character as well as driving skills. He will learn all about following distances and skid control. A year from now, he will be a better shoe than probably 90 percent of his classmates – the future Eloi who will passively accept “transportation as a service.”

This makes me happy.

My work is done.

The magnets are in!

I apologize for the delay. Last month I got hit with an overflowing septic tank and had to put off ordering a new batch. But they are here and though not queer are ready for you! All who send in a $20 donation get one.

Also, the eBook – free! – is available. Click here. Just enter you email in the box on the top of the main page and we’ll email you a copy instantly.