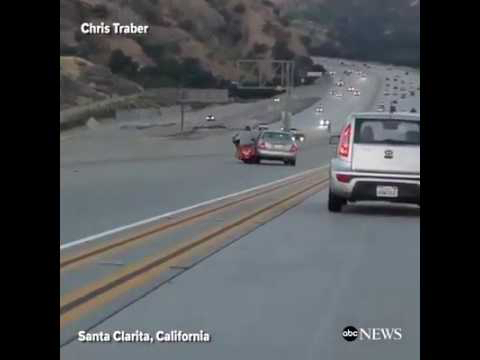 You may have seen the video below that documents a road rage incident which occurred the other day in California.

A motorcyclist is riding adjacent to a car. We don’t know why, exactly  – the video doesn’t show the lead up – but for some reason the biker attempts to kick the driver’s side of the car. There are reports that this was done because the car’s driver had previously swerved in the biker’s path, cutting him off. At any rate, the biker tries to kick the driver’s side door of the car.

Whereupon the car’s driver swerves hard to the left, directly into the path of the motorcycle.

The biker somehow manages to avoid going down – or into the concrete barrier. The driver does not. He loses control of his car, which spins violently out of control. It hits the concrete barrier to the left and then shears across several lanes, into the path of an SUV. Both cars are totaled; there were apparently injuries – some serious.

The motorcyclist was unhurt and – apparently – kept on going. Understandably. Someone just tried to kill him.

Again, we don’t know for sure why this altercation began. But we do know for sure what the car driver did to the biker, or at least tried to do. Which is attempted manslaughter at the least and arguably attempted pre-meditated murder. Yet the biker is the one being excoriated as the culprit. 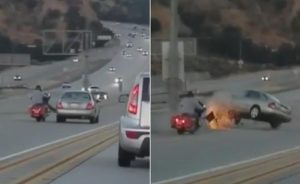 Does kicking a car door warrant the death sentence?

Shouldn’t it be the car’s driver who’s facing extremely serious charges? And not only for trying to kill the biker but also for almost killing the driver of the SUV that he struck?

And given the known actions of the driver, it is not hard to imagine what his prior actions may have been.

He may have done something equally reckless – just as potentially murderous. Such as swerve into the path of the biker prior to what we see in the video – possibly on purpose. If you have ridden a bike for any length of time, you already know this story because it is likely it happened to you, too. 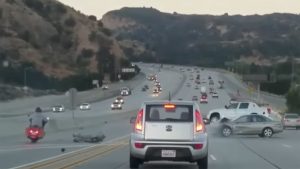 I once had a car – a late model Camaro – roll right up on my ass (which was on a bike) as I was coming up a mountain road. Two lanes and I was in the right lane. Instead of passing me in the wide open left lane, the car was up my tailpipe. When I accelerated to get away from this maniac, he jerked his wheel hard to the right and tried to force me off the road – exactly like the homicidal driver in this video. He could easily have killed me. Luck and some skill kept me from going down, but the fact remains – the driver wanted me to go down.

You do not jerk your car into the path of a bike unless that is exactly what you want.

And that, arguably, does deserve the death sentence.

Or at the very least, a sentence for attempting to impose it.