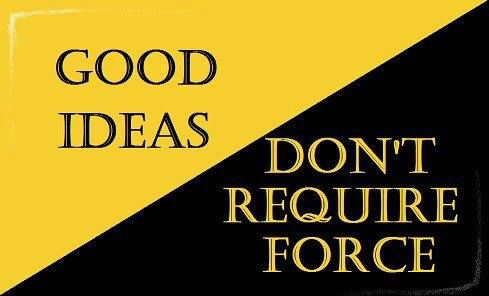 It’s been said that good ideas don’t require force – while bad ones rarely get traction without it. True enough. But how about a qualifier?

There is a kind of tacitly agreed upon – or at least, rarely questioned – notion that we all agree on what constitutes a “good” idea. It’s the keystone of coercive collectivism, without which that ideology loses moral legitimacy.

So the question becomes: Whose ideas will prevail? 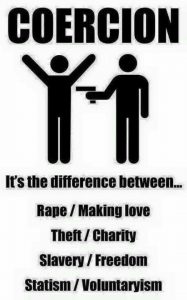 If there is a free market – in ideas as well as economics – this will sort itself out naturally and non-violently, via the signals of supply and demand. Actually, those two should be reversed. It is demand which determines supply (as well as price).

Is there market demand for six air bags (and back-up cameras and tire pressure inflation sensors and anti-whiplash head restraints, etc.) in every new car?

Wouldn’t it be nice to find out?

Unfortunately  there’s no way to know, because the market – millions of individual people’s freely expressed determinations about what’s “good” – hasn’t been allowed to operate. Instead, a handful of people’s idea that air bags (and the rest of it) are “good” has been imposed on everyone else, on the false presumption that everyone agrees it is good to have six air bags – and many other such things – installed in every new car. This is taken as a kind of collectively agreed upon noggin nodding. That illusion must be maintained, in order for the coercion and collectivism behind it to have any semblance of moral legitimacy.

And yet, it is obviously not legitimate because some noggins aren’t nodding – including mine.

And even if it is just mine.

Why should my ideas – or yours – about the “good” of air bags or any other such thing be forced to take a back seat to anyone else’s opposite idea?

That is the moral question at issue. And it goes much deeper than air bags.

It’s interesting to speculate what might be available, car-wise, if individual demand – as opposed to coercive collectivized mandate – were allowed to determine supply.

Actually, we can get a pretty good idea about what would be available, car-wise, if we were free to choose – and if the car industry were free to meet that demand – by looking at other goods which are built to suit individual demand as opposed to coercive collective mandate. 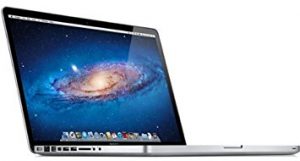 You can buy a high-end Macbook, if that is your preference. It will be feather light, have amazing features, a high-resolution Retina display and a handsome aluminum case. It will also cost you $1,200 to start.

It won’t have all the features of the Macbook. But it may be sufficient for your needs. Cool – right? The government – i.e., a handful of people who’ve somehow acquired the power to make and enforce such decisions – doesn’t (yet) mandate that you buy a high-resolution Retina display and so on. You are free – for now – to buy the computer which meets your ideas about “good”  . . . and “good enough.”

Imagine that same dynamic allowed to play out with regard to cars. It’s not even necessary to imagine.

The government only got into the car design business in a serious way in the mid-‘70s. Before then, we we were largely free to buy what we wanted – not what coercive collectivism imposed on us. There was a market for bare-bones simplicity, high-end luxury and almost every conceivable thing in between. Not coincidentally, the golden age of car design is generally considered to be the pre-government design era. Batfinned Cadillacs – and air-cooled Corvairs.

Sometimes, mistakes were made – the Edsel, famously – but nothing was forced on people. The Edsel sucked, but it wasn’t subsidized. Ford ate the loss – not the taxpayer. Ideas came – and stayed or went – on the merits. If people wanted it, they bought it. If not, they didn’t. In the case of the latter, the car industry stopped making it. 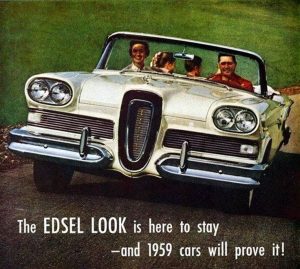 Then along came unreasonable. Or rather, immoral.

Some people – a gaggle of pushy know-it-alls – decided their notions of what is “good” must be applied generally – even if the market rampantly disagreed with their notion. Air bags are the best example of this cross-wiring of the natural order of things.

Or what ought to be the natural order of things.

They were invented – then offered. So far, so good. The market – the free choice of millions of individuals – said nyet. And that’s where it should have ended. The bags cost too much vs. the putative value. Mark that. Value – the “good” – is a subjective estimation calculated in the mind of every human individual. I can have the air bags – and maybe they’ll be nice to have if I crash into a tree. Or I could buy leather seats, which I’ll enjoy much more. 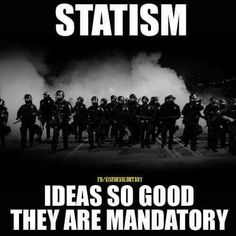 Because “safety” is a consideration? Only of degree, not kind. A high-end Retina display is without question easier on the eyes – and so, safer – than a basic display. Besides, why is this weighing of the pros and cons of your safety or your health the business – morally speaking – of anyone other than yourself?

How did it happen that other people’s ideas of what’s “good” are binding on us?

It’s the craziest – and the most dangerous – thing imaginable.

Coercive collectivism – the ideology responsible for literally hundreds of millions of murdered victims – depends on maintaining the illusion that everyone is in agreement. That we are all one big “team.”

And of course, every team has leaders.

“Open Container” = Dead in the Street