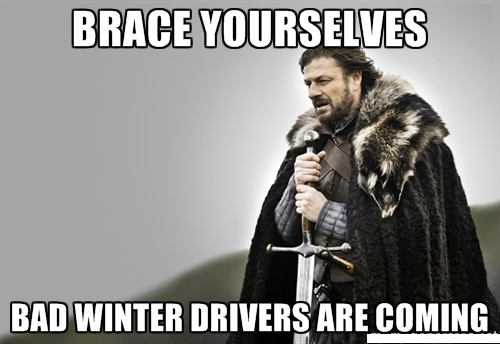 It’s reasonable to adjust speed for conditions – snow, for instance. But what about drivers who drop their speed because it might snow later?

Road (and school) closings, not because it is snowing. Because it’s possible it may.

This appears to be the latest manifestation of the hysterical – in the psychiatric sense – overfixation on saaaaaaaaaaaaaaafety which has become the leitmotif of Red Giant Stage America. The slightest threat of snow – or rain, for that matter – triggers almost comical overcompensatory measures, no longer restricted the traditional idiocy of bum-rushing to the supermarket to clear the shelves of bread and milk. 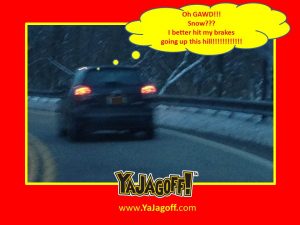 In the case of rumored snow, there’s a noticeable increase in the usual hypercaution behind the wheel. The sky is clear – and so are the roads – but you’ll roll up behind drivers behaving as though there was a blizzard in process. The Phantom Menace – and it’s not a movie.

These might-as-well-be nearsighted Little Old Ladies – of all ages and sexes – drive even slower than the usual slow – slowing even more if the road curves even slightly. It might be faster to walk.

If you pass one of these people, they’ll often lay on the horn, flash their lights uproariously.

In a car – typically – with all-wheel-drive and always with ABS and traction control. The “safer” the car, the more fearful and hypercautious its driver. This is a remarkable inversion. Most people over 40 or so today can remember when rear-wheel-drive cars were the dominant type of car – and these lacked ABS and traction control. They were far less capable of maintaining traction – and stopping competently – on rain or snow-slicked roads.

But their drivers were generally more competent – which more than compensated. They grokked such things as momentum, anticipating – how to deal with a skid and most important of all, how to avoid one.

It did take skill, of course – and that presumes a willingness to develop it as well as native capacity and the inequality which attends the latter. And we all know how “society” regards those things today. Driving has been short-bused just as everything else is being leveled to the least common denominator, which is way down the well. 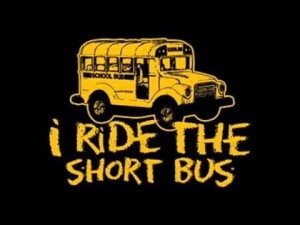 If it actually does snow – flurries will do –  these operational neurasthenics will reduce their speed to 20 in a 45. Many of them have adopted the custom of turning on their hazard lights in addition.

Their fear – a function of lack of skill as well as rote-ingrained mantras of the Safety Cult that is America’s secular national religion – is to blame for the paralyzing of so many people’s capacity to think and act.

But it’s more than Shit Your Pants Syndrome.

There is gross incivility to consider as well. A resentment of those who aren’t operational neurasthenics.

Why don’t these nervous old ladies – of all ages and sexes – ever pull off onto the shoulder and wave the rest of us past? It’s understandable – forgivable – that some people are terrified of driving in the snow, actual or just possibly coming later tonight. Their skill level is low – so their fear level is high.

But why must they impose their gimps on others?

There is a kind of supercilious meanness to them. They don’t think it’s saaaaaaaaaaaafe to drive even half the speed limit, so everyone else must do so as well. It is of a piece with the mentality which cannot brook disagreement with anything – and which reflexively resorts to force to impose its opinion on others.

This accounts for the horn honking and headlight flashing – and most especially for the phenomenon of the slow-poker being passed increasing his speed to prevent you from passing him. He is so concerned about saaaaaaaaaaafety that he will drive recklessly to make the point. 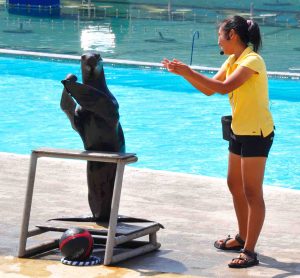 These same people are the ones who will clap like trained seals when the automated car arrives – and yelp when non-automated cars are outlawed – because it will cement their operational neurasthenia as thickly and as inescapably as W2s and 1099s.

It will no longer be possible to leave one of the horn-honking, flashing-his-lights furies receding in your rearview. Your automated car will simply slot in behind him – and another behind you – and eventually, soporifically, you’ll get to your destination.