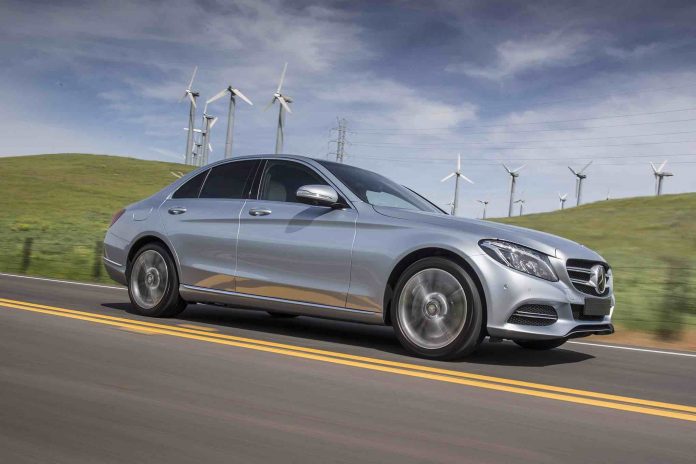 Don’t buy the hybrid version of the Mercedes C Class for the money it’ll save you. Tell that to your wife.

Buy it for the speed it will give you.

Tell your friends that.

The hybrid version of the Mercedes C sedan has almost 500 ft.-lbs. of torque awaiting your right foot – which is much more fun than the plug that’s in the trunk. Yes, you can charge it up – and run on battery power and save the Earf all the way up to 80 MPH – which is as fast as the electric-enhanced Benz can motorvate on battery power allein.

Just forget this business about saving money. It’s what you tell other people to cover your tracks – kind of like Superman putting back on his Clarke Kent duds. 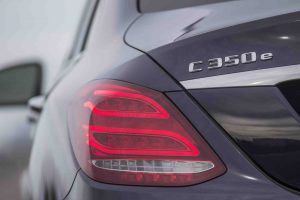 The C350e is the hybridized version of the Benz C-Class sedan. Which is Mercedes’ almost-smallest sedan, a half notch up from the CLA Class sedan in terms of overall length (184.5 inches long overall vs. 182.3 for the CLA sedan).

But it’s at least two notches up in terms of interior space vs. the uber-schick but also uber-tight CLA, the “couple-like” styling of which is easy on the eyes but really hard on the rest of your body – particularly if you’re tall and double that if you have to ride in the back seat – where there is only 27.1 inches of legroom vs. 35.2 in the more traditionally styled C-sedan.

Also, there is this hybrid version of the C – which you can’t get in a CLA. 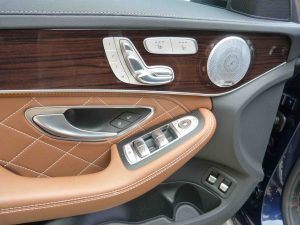 It sounds like a lot to spend to save on gas. But that’s hardly the point – no matter what the Mercedes brochure says.

The plug-in hybrid C is the latest /newest version of the C-Class sedan. AppleCarPlay and Android auto are now available in all C models. 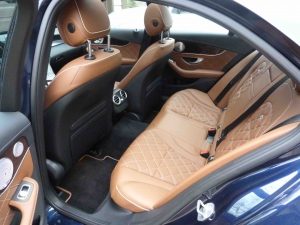 The torque of a big-block V8 (with acceleration to match) in a car that averages 30 MPG on the gas side of the drivetrain and infinity on the electric side.

Back seat you can sit in – if you’re not Mini-me.

Headroom is more the issue than legroom.

BMW 330e hybrid stickers for about $2k less to start – saving you green. 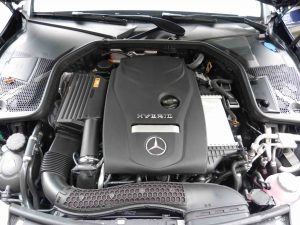 Like literally every small-medium-sized entry-luxury sedan, the C comes standard with – surprise – a 2.0 liter four cylinder huffed on by a turbo. The Benz’s makes 241 hp and 273 ft.-lbs. of torque at a very low 1,300 RPM. It’s paired with a nine-speed automatic and you can go rear-drive or all-wheel-drive (4-Matic).

The hybrid C is the real surprise.

It also has a 2.0 liter turbocharged four under its hood. But it also has a high-performance 6.2 kilowatt water-cooled battery pack and high-performance electric motor backing that up. Combined output is 275 horsepower – and 443 ft.-lbs. of tire-abusing torque feeding through a beefed up seven-speed automatic transmission, which needs fewer gears because there’s so much torque. 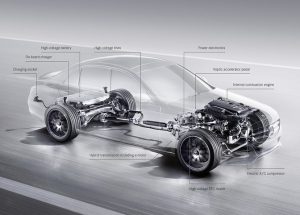 The hybrid C gets to 60 in the same 5.8 seconds but it does so more authoritatively. Most V8s don’t make the torque the Benz’s hybrid drivetrain does. And fewer still – if any – average 30 MPG. Mark that. Not on the highway.

More is possible, too. The Benz is a plug-in hybrid, which means it doesn’t have to burn gas to recharge its batteries. It can also go about 20 miles on the batteries – and at speeds as fast as 80 MPH. This means that you could get to work on no gas at all, if your trip is within the action radius of the Benz’s batteries on a full charge.

And even if it’s not, you can still get part of the way there on the batteries.

There is an “eMPG” figure that EPA publishes, but it’s very hard to grok this – and your actual mileage will absolutely vary. 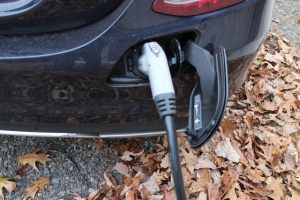 For example, if your trip is mostly flat  or (even better, if you’re looking to maximize) downhill, you may be able to go farther on the batteries than the advertised 20 miles. In part because it takes less work to go down a hill – and also because a hybrid can make use of the inertia to recharge the batteries without having to put in a request to the gas engine.

On the other hand, if your trip involves hill, the batteries will wilt much more quickly – it takes more work (energy) to push something up a hill than it does to keep it rolling on a straight stretch.

Point being, test drive this car the way you drive – and where you drive – in order to get a feel for what your mileage will be. 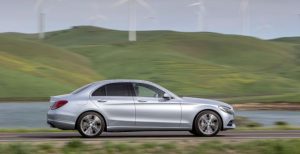 You can run silent – or fast.

In electric mode, the C burns no gas – and so emits no C02 – which isn’t a pollutant (in the sense of affecting air quality). But it is critical for Mercedes, if Mercedes wishes to sell this car or any other car in the European countries (including Germany) where anything that emits C02 at the tailpipe is verboten.

Electric cars – including part-time electric cars like this hybrid Benz – are the only kinds of cars that qualify.

Here, the silent drive is more cool than necessary. It’s neat to move without sound; fun to point out to passenger that the engine is not running – dead tach! – but the car is doing 70. And – kudos to Mercedes engineers – the transitions between gas and electric operation are as seamless as a computer weld. You have to look at the tach to see whether the engine is running. 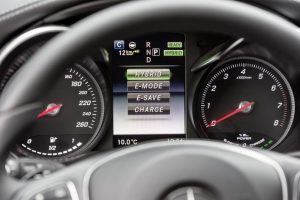 But this is also a Mercedes. Which means it must move. Which is why there are 443 ft.-lbs. of torque on tap. Which is something you will not find in a Prius.

The thing lunges forward like a ball-shocked bull when asked to. And, immediately. The double dose of torque provided by the turbo and the electric motor/battery pack. Which replicates the motive force of the biggest V8s of the muscle car era.  The Benz hybrid’s torque output is about the same made by the 7.4 liter (455 cubic inch) V8 in my befeathered ’70s Pontiac Trans Am – but without the sturm und drang.

The C – unlike the TA –  is silent before the storm. No choppy idle to give the game away. But toggle the C’s selectable drive mode into Sport+ and this four cylinder hybrid sedan makes my TA humble. Back to the garage. A bigger cam, maybe. 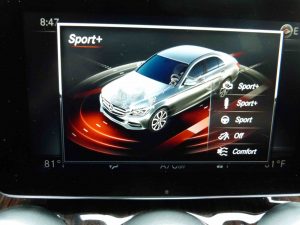 You also get “very sporty” gear changes in S+ ode – and the standard Airmatic adaptive suspensions cinches down like a snare drum (the car has just 3.5 inches of air gap between its floorpans and the pavement).

Now it out-corners my poor old muscle car, whose plucked feathers drift down around its shaker scoop. Oh, the pain . . . the pain. 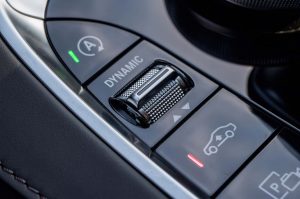 When decelerating in ECO mode, the electric motor is used to scrub speed – and generate electricity. The system works in tandem with the radar-based adaptive cruise control, to minimize the use of the brakes to the extent possible.

You save pads as well as gas.

There are also four other driver-selectable modes – including Sport (things toned down a notch) and Comfort (dial back those snappy gar changes, ease back on the suspension settings, Economy (not quite as focused on maximizing the MPGs; does not engage the haptic feedback accelerator pedal) and Individual (which allows you to individually tailor the settings – throttle sharpness, shift aggressiveness, suspension firmness – rather than have those settings packaged together). 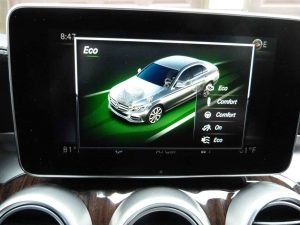 It has instant-on heat (and cooling) because both are powered electrically rather than mechanically. The engine doesn’t have to run – or warm up – before you get heat (or cold).

And you can dial up either remotely – via your phone.

These are upsides to hybrid C ownership. But there are a few downsides, too. 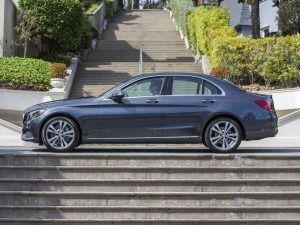 The C is a pretty small car – 184.5 inches long overall. Just slightly longer (by about two inches) than a Honda Civic sedan (182.3). Legroom in both rows, though, is actually pretty good: 41.7 inches for the driver and front seat passenger and 35.2 inches for the backseat riders.

This is comparable to mid-sized sedans and a great improvement vs. the CLA sedan – which is exactly Civic sized (182.3 inches) overall and has only 27.1 inches of room in its backseat.

But – in both cases – it’s headroom that’s the problem, at least for taller people.

The C sedan has just 37.1 inches of that – in both rows. That’s much less clearance  than you’ll find in the C hybrid’s closest direct rival, the hybrid version of the BMW 3 Series sedan. That one has 40.3 inches of headroom up front – a difference of almost three inches.

If you are a six-footer (or more) the BMW will be a much better fit. Which is a shame, because the Benz’s interior is otherwise a really nice place to be. 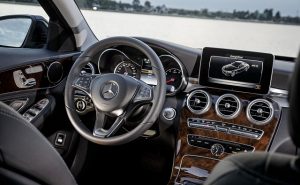 The layout – and ambiance – is similar to that of an E or even an S-Class, just on a smaller scale. You can even get E and S-Class-esque features, including quilted mocha leather seats, a Burmester surround sound audio rig and a scent dispenser in the glovebox. Among the few things you can’t get in the C  – yet, give it a year or two – are the massaging seats available in the E and S and a flat-screen instrument cluster.

The hybrid plug-in port is very discreetly located behind a pop-out panel blended into the lower rear bumper. Other high-end hybrids – including the BMW hybrids – have their plug-in ports located more noticeably on the side of the car. 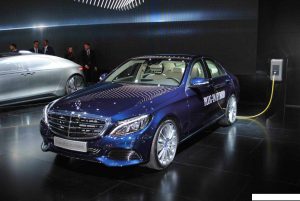 Depending on the location of your electrical outlet, one – or the other – will be more convenient. The rear bumper location is arguably the better location because you can pull into any parking spot where there is a charging station – no worries about having to line up the right side or left side of the car with the “pump.”

Now would be a good time to buy a 2018 C – hybrid or not. Mercedes is going to bring out an updated C-Class for the 2019 model year a few months from now, probably mid-late summer.

Dealers will be more eager to make a deal on their stock of 2018. 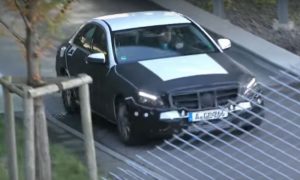 And there is another reason for taking the plunge sooner rather than later.

The next C is likely to be equipped with the latest generation of Mercedes’ automated driving technologies, some of which are already available (or standard equipment) in the current E and S-Class sedans. If you are among the Holdouts who prefer to drive the car yourself, you may prefer the current C to the one that’s coming. 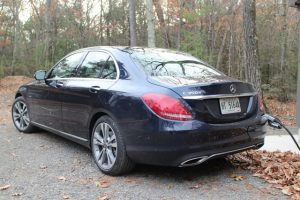 There may not be such a thing as a three-scoop sundae made with real cream and sugar that doesn’t make you fat – but here’s a hybrid that’s faster and more fun than the non-hybrid version.

And you can tell your wife it “saves gas.”