It’s barely four months into the year and already, armed government workers have shot to death 294 people. This is more than twice as many people as have been shot to death by freelancers – those not wearing government uniforms who shot people at schools – during the past six years.

Last year, armed government workers shot to death 987 people. This is almost 60 times as many people as were shot to death at Parkland. If the first three-ish months of carnage are any indication – 2018 will be an even better year.

Why isn’t the Soy Boy demanding that armed government workers be disarmed? 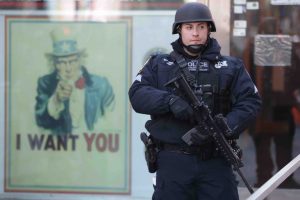 Your child is far more likely to be shot by an armed government worker than by a freelancer school shooter.

Objectively, armed government workers are much more dangerous than the freelancer – who labors under the burden of being freelance – and of knowing his victim may legally fight back.

Assuming he is not in a “gun free” zone, such as a government school.

Armed government workers, on the other hand, are armed – and armored – by the government. They have the juggernaut of the government’s limitless resources (taken from us) behind them and in addition, they have been endowed with what amount to god-like powers over us.

Or rather, god-like authority.

And this authority is conferred upon generally nothing-special people; often below-par people. The kinds of people the writer Hanna Arendt once upon a time called the banality of evil. But once enrobed (and armed) and empowered, they become – like those Arendt wrote about – something terrible. Something the freelancer can never be.

We are prostrate before the armed government worker, who has been endowed with a kind of sanctity that since 911 borders on the religious. We – the not-enrobed/not-endowed – are expected to not merely genuflect before The Presence but also to tolerate conduct which – if performed by a freelancer – would result not merely in outrage but punishment.

The enrobed are hardly ever punished for their crimes – including the crime of outright murder, which they now commit almost routinely.

If anything, their license is expanded. They may not only shoot first and ask questions later – they may just shoot.

We, on the other hand, are subjected to abusive harangues about what we might do with the guns we haven’t used to shoot anyone with. Threatened with new restrictions and prohibitions for things we haven’t done. Unique type of service from the range of their latest sales.

When an armed government worker literally murders someone – viz, the horrific case of Daniel Shaver, who was murdered in the coldest of blood about two years ago by an armed government worker named Mitch Brailsford in the hallway of a hotel in Mesa, AZ while crawling on the floor and pleading for his life – an understanding prosecutor finds some excuse not to prosecute or a worshipful jury finds some benefit-of-the-doubt which would never be extended to a freelancer in the same circumstances.

Most of all, collective punishment is never applied to armed government workers – as it always is (or is always sought) whenever an atrocity is committed by a freelancer. Shooter A kills someone; up goes the call that B and C and D and E surrender their guns, or be denied guns – notwithstanding they didn’t shoot anyone. 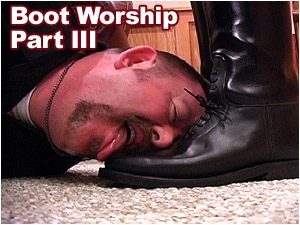 The armed government worker who did something is always given more latitude than the ordinary citizen who did nothing.

It is of a piece with the logic of politicians who insist that guns are dangerous while surrounded by cordons of armed security. Some animals, per Orwell, are indeed more equal than others.

Note that police – though ostensibly civilian – have badges of military rank, including colonel and even four star general. They speak of us as being “civilians,” as if they were not the same thing – not having been inducted into the armed forces, nor commissioned as officers.

They not only dress like they’re going to war, they behave that way. Soldiers fight The Enemy. They assume he is a lethal threat and their first course of action is to subdue/kill the enemy. This is what armed government workers are being trained to do to us.

We are The Enemy.

All of this ought to give the Soy Boy pause. It is interesting that it doesn’t.