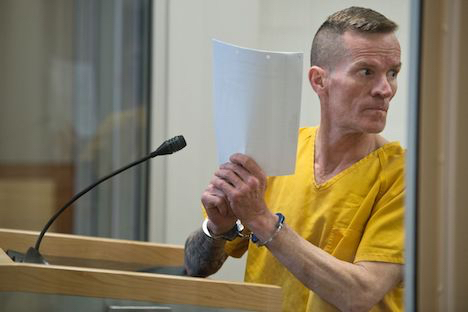 Have a look at this armed government worker – Alaska State Trooper Vance Peronto. He has been arrested for the attempted sexual abuse of a minor, a 16-year-old girl he “met” during a traffic stop.

He didn’t give the girl a ticket. But he wanted another form of payment.

Peronto was  arrested when he showed up at a hotel where he thought he was going to meet the girl for sex, according to news reports.

A pair of Victoria’s Secret underwear  was in his taxpayer-financed patrol car.

When Peronto asked how old the girl was and she replied that she was 16 he wrote “WOOW Gulp,” according to the charges filed against him.

The girl’s father learned of the messages and reported the contact to the Office of Professional Standards at the Department of Public Safety, public safety spokesman Jonathon Taylor said. Troopers interviewed the girl.

At that point, Taylor said, troopers obtained control of the phone and permission to access the girls’ social media accounts.

When Peronto messaged that he was going to be in Anchorage for a training event, investigators pretending to be the girl arranged to meet at a hotel room, he said. They said she’d be there alone.

Francoisi said that he considered Peronto a potential flight risk. He is not allowed to leave Alaska.

Taylor said Peronto is still employed as a trooper at this point.

He couldn’t say whether troopers believe there may be additional victims. Public records show  Peronto lived in Eagle River before moving to Sterling.

He worked as an Alaska State Trooper in Kotzebue and the Mat-Su before being stationed in Soldotna, according to Anchorage Daily News archives and the Department of Public Safety.

Peronto earned a salary of $99,044.40 as a trooper, according to the state Division of Personnel.

Among other duties over the years, he served as an investigator and drug detection K-9 handler.

Peronto’s name surfaced in media reports earlier this year as part of a lawsuit by a former state prosecutor who accused Peronto of sexually harassing her with a lewd text message in 2014. Peronto and the state argued the two exchanged dozens of texts the day before the one the prosecutor reported.