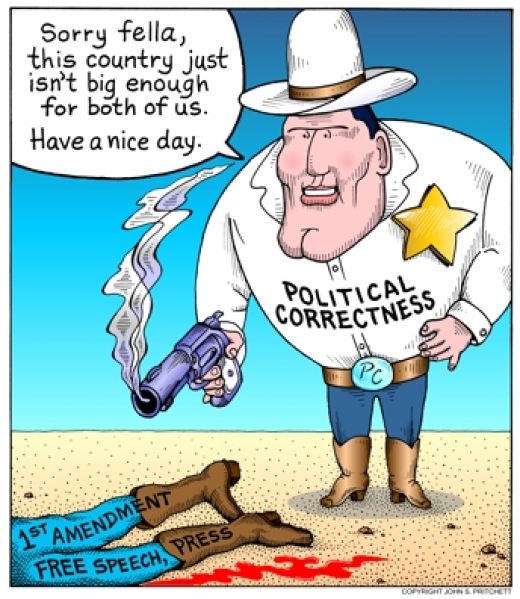 I wrote a couple weeks ago about the excommunication of Alex Jones from pretty much every controlling organ of the Internet – and that regardless of your opinion about Alex Jones, the issue isn’t Alex Jones. The issue is the precedent set by what has been done to Alex Jones.

He was punished by the entities – just a handful of them, all working in concert – to silence him or at least, make it much harder to people to read and listen to what the man has to say.

The argument that this does not constitute censorship because the entities – Gooo-guhl and Twitbox and Gesichterbuch – are privately owned is as risible as the idea that the airwaves are private property.

What you get to read and hear online is controlled by these entities and unless the argument is that the Internet is their private property then the idea that they have the right to shut people up – and only certain people, who invariably happen to be people who speak and write in ways that aren’t “politically correct” – then what is occurring is indeed censorship and worse than that, actually. It is economic as well as ideological warfare practiced by entities furious that that non-PC thoughts are finding a receptive audience – and that this audience is growing.

Rather than attempt to sway back the audience with their own ideas, these entities are now resorting to the bully’s tactic of the electronic beat-’em-up. Prevent them from reaching their audiences – and prevent them from earning a living.

The practice is called “demonetization” – shut down all online advertising on the non-PC site, which advertising is almost entirely controlled by the same entities which control what you get to read and hear online.

And now that precedent is being expanded upon and will soon become practice, if not pushed back and hard.

Amazon is proscribing books it doesn’t like – no matter how many people want to buy them.

I here reprint an article from today’s InfoWars:

Controversial author Roosh Valizadeh revealed the ban last night, tweeting, “Amazon has removed 9 of my books from sale, including my newest book Game, which was ranking in the top 1000. They won’t tell me the specific reason. Many of the books were on sale for 5+ years.”

Amazon has removed 9 of my books from sale, including my newest book Game, which was ranking in the top 1000. They won’t tell me the specific reason. Many of the books were on sale for 5+ years. @CreateSpace & @AmazonKDP: can you tell me why the books have been removed?

Valizadeh later received an email from Amazon informing him that “content guidelines” were broken, but was again given no specifics.

“I feel like I’m in a Franz Kafka novel,” he tweeted.

Amazon Has Banned 9 Of My Books Without Explanation http://www.rooshv.com/amazon-has-banned-9-of-my-books-without-explanation?utm_source=twitter&utm_medium=twitter&utm_campaign=twitter%20dlvrit%20rss … pic.twitter.com/qKzwAxXVTd

I just got a new email from Amazon. They absolutely refuse to tell me which “content guidelines” were broken, but they encourage me to randomly guess what is wrong and start from scratch. I feel like I’m in a Franz Kafka novel. pic.twitter.com/Y9e0GvpMOK

“What we deem offensive is probably about what you would expect,” states the guideline, a completely vague description which could literally be anything that one person deems offensive.

“I believe the bannings began because the launch of Game was extremely successful. I sold 2,000 books in the first two days and hit the top 700 on Amazon paperback on the first day. Even before Friday’s launch, Game was already in Amazon’s top 10,000. As far as I know, Amazon didn’t receive a single complaint about the content, but they removed it anyway,” wrote Valizadeh, adding that Amazon sells all kinds of books which contain details of violent rape and sexual abuse.

“None of my books contain child rape scenes, physical abuse, pornography, or sexual violence, and yet they were banned. Were they banned because they were effective at helping men? Was it because executives at Amazon disagree with my political opinions? Was it an action from a rogue employee? They won’t tell me,” said Valizadeh.

The author also noted that a 2015 petition lobbying Amazon to ban his books received over 250,000 signatures at the time, suggesting that a similar effort may have been successful this time around given the intense climate of censorship against conservatives that has accelerated over the last month.

In 2015, a petition with over *250,000* signatures tried to get my books banned. Multiple media articles went out, urging Amazon to do so, but they took no action. What has changed since then?

The move has brought comparisons to Nazi book burning or dystopian classics like Ray Bradbury’s Fahrenheit 451, where the state had a unit of firemen dedicated to burning books.

Back in 2009, Amazon made headlines after it erased digital copies of 1984 from Kindle devices, although that was over a copyright issue. This is much worse.

“Did anyone reasonably foresee that Amazon of all places would ban books? It’s going to get so bad that you can’t imagine how bad it’s going to get,” tweeted Mike Cernovich.

Did anyone reasonably foresee that Amazon of all places would ban books?

Apparently though according to many conservatives, so long as it’s giant corporations and not governments banning everything and removing everyone’s ability to have a platform or engage in commerce, everything’s just fine.

Valizadeh also posted a YouTube video talking about the ban, which can be viewed below.

Infowars has been banned by Facebook. Please help by sharing this article on your own Facebook page.

Excuse Me … And The Backwards Notion of American Courtesy.