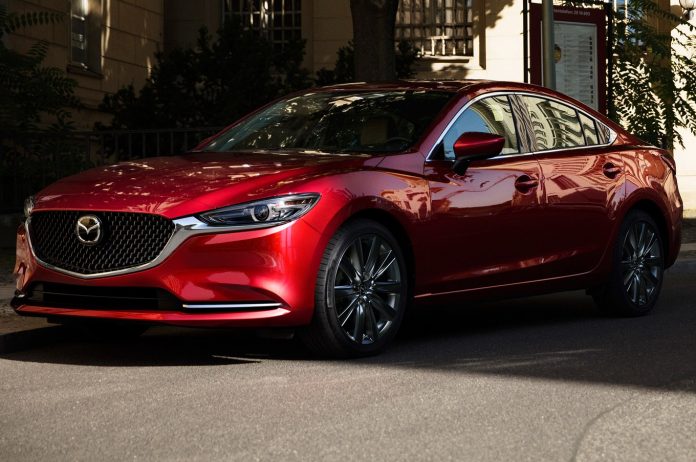 How good a car is the Mazda6?

Good enough to go without its six for four long years – and still sell better than it did when it offered a six.

When Mazda redesigned this car back in 2014, it came out a wolf-whistle looker – easily the sexiest car in a classroom full of competent cars as exciting as oatmeal. It was also exceptionally fun to drive, too – a quality lacking in most of its rivals.

But it lacked oats.

The redesigned car no longer offered the optional V6 it previously did. Meanwhile, all of the Mazda’s rivals did offer an engine upgrade.

Even so, about 4,500 people each month bought the new 6 with a four. That’s about 54,000 cars a year – an extremely respectable number for any car brand these days and especially for Mazda, which is a brand with a much smaller footprint in this country than the Japanese Big Three (Toyota, Honda and Nissan).

And now, at last, a horsepower infusion.

Especially given how little Mazda charges for it. 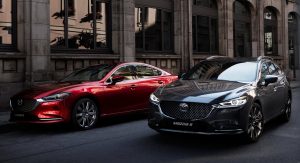 The Mazda6 is Mazda’s mid-sized/mid-priced sedan. It goes bumper to bumper against similar models from Toyota (Camry), Honda (Accord), Hyundai (Sonata) and Nissan (Altima). 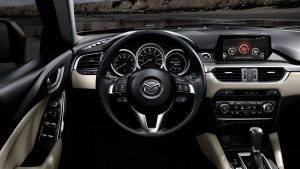 The Hyundai Sonata is the closest shave, price-wise. It starts at $22,050 and also has the biggest trunk in the class and the most front seat legroom – by several inches.

It is a very nice car.

But the Hyundai is automatic-only (also the Nissan and the Toyota) and designed to lean more toward the luxury rather the sporty side of the aisle.

The Mazda’s got a faster pulse – at a much lower price. 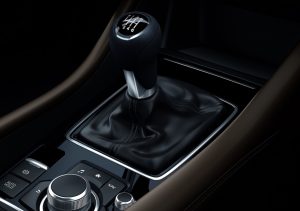 It comes standard with a manual transmission. The Accord offers one – but charges extra for it.

The others don’t offer one at all.

And after a four-year drought, the 6 once again offers an optional engine. A turbocharged version of the 2.5 liter engine that makes 227 horses – 250 horses, if you feed ’em premium unleaded. 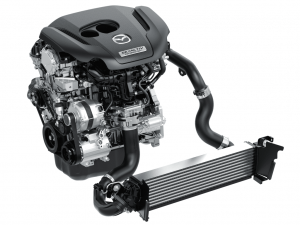 A bit less back seat (and trunk) space than most rivals offer.

We won’t get the wagon version of the 6 that Mazda sells in Japan and Europe. 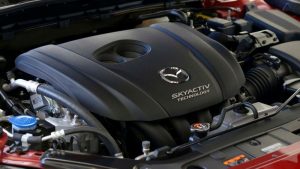 The 6 still comes standard with a 2.5 liter engine (no turbo)  that makes 186 horsepower; it can be paired with either a six-speed manual transmission (no extra cost) or an optional six-speed automatic.

It’s not the most powerful standard engine in the class, but it is one of the very few engines you can still get in this class that can be paired with a clutch.

And without someone clutching at your wallet.

The Honda Accord is the other exception, but you’ll pay $3,830 more at the Honda store to get that third pedal. That’s the difference in price between the Mazda6 with its standard manual ($21,950) and the Accord with its optional manual ($25,780). 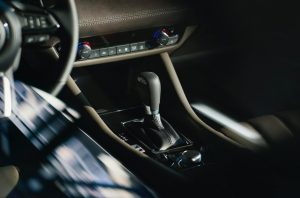 The others don’t offer one at any price.

Some rivals – like the Nissan Altima – come only with continuously variable (CVT) automatics, which give a slight fuel efficiency benefit vs. a conventional automatic with fixed forward gears – but also tend to increase drivetrain noise because they hold the engine at higher RPM during acceleration.

Mazda explicitly shies away from CVTs because (Mazda’s words, in the press kit) they lack “connectedness between the driver and the car” – or Jinba Ittai, in Japanese.

True, that. Efficiency isn’t everything – or even very much. 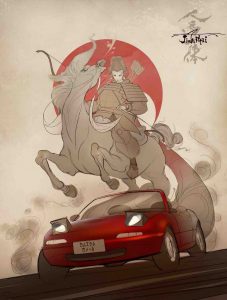 Equipped with the six-speed manual, the Mazda6 carries a 24 city, 33 highway mileage rating; with the optional six-speed automatic, the number rises to 26 city, 35 highway.

For reference, the CVT-equipped Altima with its standard four cylinder engine (2.5 liters, 179 hp) carries an EPA mileage rating of 26 city, 37 highway – a negligible difference vs. the automatic-equipped Mazda.

The Kahuna in this class as far as horsepower – and mileage – is the just-redesigned Toyota Camry. It comes standard with a 203 horsepower 2.5 liter four that carries a pretty spectacular EPA rating of 28 city, 39 highway.

But, it’s automatic-only – which is a downer for people who like to drive as much as they like speed.

Less Jinba Ittai, regardless of hp and MPGs.

More hp is available in the Mazda now, now, too – and (once again) for less. 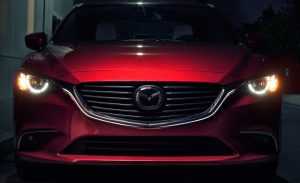 Mazda has added a turbocharger (and other enhancements) to the 2.5 liter engine – in Gran Touring and higher trims. This boosts the horsepower to 227 on regular unleaded and 250 on 93 octane premium.

This engine is paired only with the six-speed automatic, which has the advantage of fewer gears than rivals eight (Toyota) and ten-speed (Honda) automatics. Those transmissions have multiple overdrive gears – which helps them achieve higher fuel economy – but the downside is inherently greater complexity and cost; it may explain why the Camry and Accord cost so much more than the Mazda6 does – and it may also mean they cost you more down the road, too.

Plus – again – the mileage difference is negligible.

The Accord’s 2.0 liter turbo engine – which makes 252 hp – makes its maximum power on regular unleaded – saving you a couple bucks at the pump. It is also available with either a six-speed manual or the ten-speed automatic. 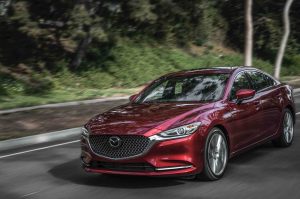 Mazda is what BMW once was – the brand for people who actually like to drive. For its own sake. Who take the long way home – on purpose.

Ideally, with lots of curves along the way.

That’s where the Mazda shines brightest.

Its suspension is two things most usually aren’t – forgiving and grippy. The ride is almost soft, but the car is anything but when you fling it around laterally. Mazda achieves with anti-roll bars what others do with stiffer springs – along with a unique-in-the-class feature called G-Vectoring Torque control, which uses selective (and automatic) application of engine power to the left front or right front wheel to “weight” the chassis in the curves, increasing traction and stability. 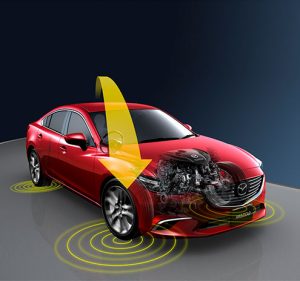 In a sentence, the 6 is the smoothest-riding car in the class that can also out-corner anything in the class.

Plus, you get to to drive it.

Shift through the gears as you like; hold second or third as long as you want to. No ECU will pre-empt you.

Also, don’t let the standard engine’s horsepower rating pre-emptively disappoint you. Drive one before you decide you need more power. This engine’s very high compression (13.0:1) make it an exceptionally responsive engine – and the fact that it’s available with a manual transmission means you can make the most of it.

The optional engine has a very different character. 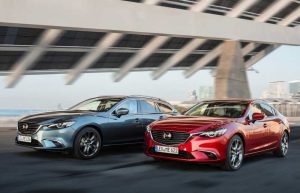 As Mazda notes, the turbo 2.5 engine’s torque output is comparable to that of a small V8’s. It is also much higher than the torque output of the Honda Accord’s horsepower-comparable 2.0 liter turbo four, which only makes 273 ft.-lbs. of torque. 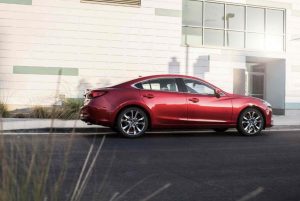 The immediacy of all that twist gives the 6 the capability to achieve with half pedal what the others need three quarters or even pedal-to-the metal to match.

And there is something else. Or rather, its absence.

The Mazda6 does not come with auto-stop/start.

Which means no combustion-interruptus to annoy and distract you at every red light. The engine stays on – unless you turn the ignition off.

The turbo engine has cylinder-deactivation, but- unlike auto-stop/start – it’s unnoticeable.

Bikinis aren’t the most practical attire, but if you’ve got the body for it . . .

It is about the same overall size as its rivals – 191.5 inches (the Accord is 192.2 inches, the Camry 192.7 inches, the Sonata 191.1 inches) but it has its inches in all the right places. Take a look at this car and you’ll immediately see the passion Mazda feels for the art of driving.

It’s such a pretty car that even if it didn’t drive as eagerly as it looks like it wants to, it’d be enough, almost, to want to take it home regardless. 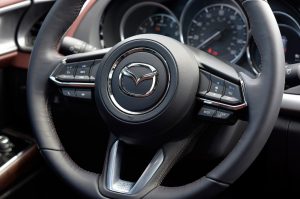 The feat is all the more stupendous given the parameters Mazda’s designers – all car designers – are constrained by. The government has imposed so much ugliness (and sameness) on cars by mandating the crashworthiness of an M1-Abrams battle tank.

Yet – somehow – Mazda made the 6 beautiful and Uncle-compliant.

Even the steering wheel looks good – no small thing, given the constraints imposed by air bags.

This further helps to explain the car’s phenomenal sales success relative to its Big Three rivals.

There is a slight price to be paid, in terms of backseat and trunk space. But – like the MPG difference – it’s not a big price. 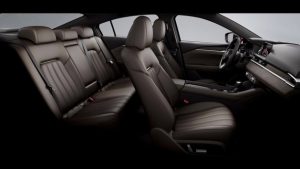 The Honda Accord has more backseat legroom (40.4 inches) and a 16.7 cubic foot trunk – but it’s probably not a deal-breaker’s difference. Same vs. the Camry – which has 42.1 inches of legroom up front, 38 inches in the second row and a 15.1 cubic foot trunk.

And they all have less curb appeal. 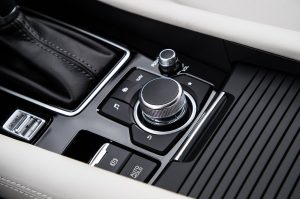 The one less-than-Jinba Ittai thing about the 6 is its entertainment system interface, which involves rotating a knob to select and then pushing it to engage. It’s a less immediate interface than others systems, which have individual buttons for the various functions, eliminating the need to select before you engage.

However, you get the hang of it quickly enough – and once you do, it can be done without detracting from the drive. Besides which, you’ll want to drive – in which case things like “apps” and “menus” become as secondary a whether your extremely hot girlfriend knows how to speak Hindi. 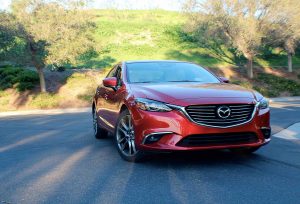 Another plus: You can get automated emergency braking  . . . if you want it. But it’s not standard – which is great, for those who’d rather not be forced to pay for it and who prefer to brake for themselves.

Instead, spend the money on the available heated rear seats –  an uncommon option in this class.