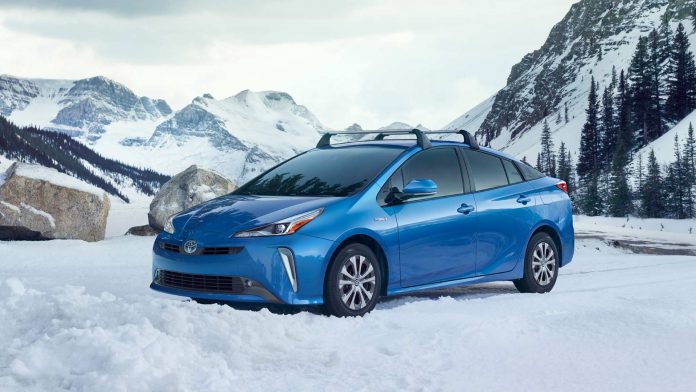 How many vehicles with all-wheel-drive average 50 miles-per-gallon?

The answer, of course, is not many. Very few manage even 35 MPG. That’s best case, on the highway. Usually just barely.

Cue The Exception – the new AWD-equipped version of the Toyota Prius hybrid.

It’s also the only hybrid that does both while not getting stuck in the driveway when it snows. 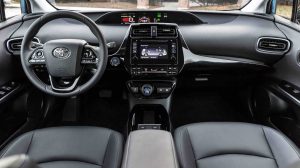 Toyota took the Prius hatchback and added all-wheel-drive, a clever way to re-establish the Prius as something special – which  it used to be but isn’t anymore.

The Prius was the first hybrid and – for more than a decade since its launch way back in 1998 – clearly the best hybrid. Because no other hybrid matched its parsimony at the pump – with the exception of Honda’s original two-seater Impact hybrid.

Which was more efficient but much less practical.

But, inevitability, there came contenders for the crown – most recently the excellent Hyundai Ioniq and the Kia Niro as well as the new Honda Insight – all three of which offer equal or even better mileage as well as better performance.

And some other things, too. 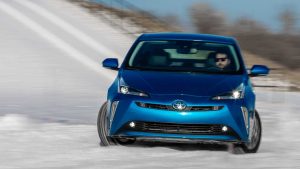 The Prius AWD-e gets an additional electric motor to drive its rear wheels (the regular Prius is front-wheel-drive) at speeds up to about 43 MPH whenever the system detects slippage up front. The system automatically disengages above 43 MPH – and whenever front wheels aren’t sipping – to let the rear wheels freewheel in order to conserve energy and so fuel.

Otherwise, it’s the same as the regular Prius – just with much better poor weather traction. 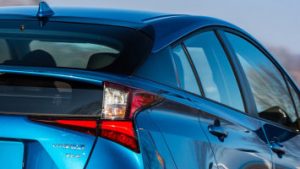 It’s the FWD Prius Limited trim – a luxurious Prius, which stickers for $32,200.

For now at least, Toyota isn’t offering the AWD-e Prius in Limited trim.

Or as a plug-in (more follows below).

The Prius itself carries over largely unchanged but the available AWD system gives it something none of its primary rivals offer. 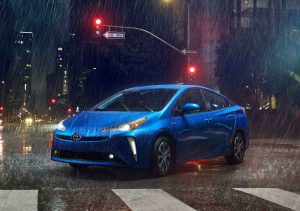 There are, of course, other hybrid models available with AWD – but none of those are dedicated hybrids like the Prius (and the Ioniq, Niro and Insight sedan). Meaning they weren’t designed to be hybrids from the wheels up, with maximum efficiency in mind – but rather converted into hybrids after the fact – from existing, non-hybrid cars that were originally designed to deliver primarily other things, such as luxury or performance or whose layout (e.g., a large sedan or crossover SUV) renders them too heavy to be particularly fuel efficient – even when they are running on batteries power some of the time. 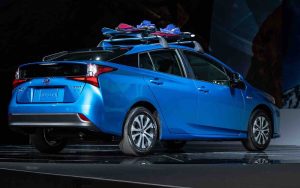 These models – for example, the hybrid version of Toyota’s RAV4 crossover SUV – do get better mileage than the non-hybrid versions of the models they’re based on.

But none even approach the 50-plus average MPG capability of dedicated hybrids like the Prius and its direct competitors.

Goes very far on a gallon – and still goes when it snows.

Minimal MPG penalty vs. FWD version of the Prius.

No additional power to offset the additional weight (about 200 pounds) of the AWD system; you’ll get where you’re going – even in poor weather.

Just not as quickly. 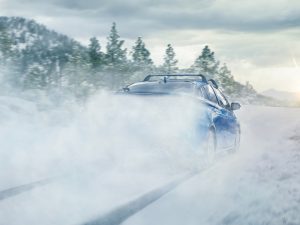 The AWD Prius gets a little more ground clearance (5.3 inches) than the FWD Prius (5.1) inches but it’s a negligible difference. More clearance would definitely help in the snow – but it would also hurt at the pump (aerodynamic drag) and so that’s why there’s not that much more of it. 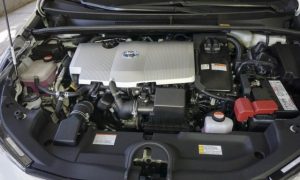 The AWD Prius is powered some of the time by the same 1.8 liter gas engine as the FWD Prius – but it gets a second electric motor to power the rear wheels at times, too.

The rear motor engages when the system detects slipping up front and so works pretty much like the AWD systems in other cars – with one significant difference. To save gas, the system automatically cuts off at speeds over 43 MPH, on the assumption that if you’re moving at that speed, low traction is probably not a problem.

Most other AWD systems are “always on,” even if most of the engine’s power is still being routed to the ground via the front wheels. The driver has no way to disconnect the system, so there’s always a little bit of drag – which (along with a little more weight, due to the extra parts) is why an AWD-equipped version of a given vehicle will almost always deliver slightly less gas mileage. 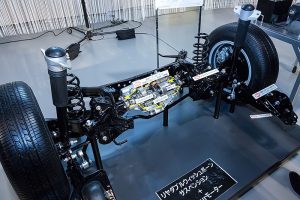 That’s a bit less than the 58 city, 53 highway (and 56 combined) that the FWD Prius can deliver – but it’s still vastly better than anything else with AWD – that’s also a hybrid – can deliver.

There are some other difference as well. The AWD Prius has a nickel metal hydride battery pack while the FWD version of the Prius uses a lithium-ion battery pack.

One more difference, too:

For now, Toyota isn’t offering a plug-in version of the AWD-equipped Prius – probably because it would be too pricey for most prospective Prius buyers.

The least-expensive plug-in version of the FWD Prius is the $27,350 Prius Prime. That’s already a $3,580 price bump from the base Prius L Eco (without plug-in capability) and so a fairly hard sell  . . . because gas prices are very low. 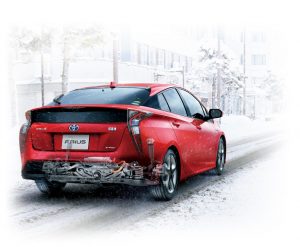 While it’s neat to be able to drive farther (and faster) on the battery side of the hybrid drivetrain, as the plug-ins can – it’s hard to make an economic case for them at the moment.

That extra $4k (almost) you pay to get the capability to burn less gas could buy a lot of gas when it only costs about $2 per gallon.

A plug-in version of the already-more-expensive AWD Prius would sticker for almost $30k to start – assuming the same $3,850 price bump for the plug-in gear. That would be even harder to make a case for on economic grounds.

It’s a problem across the board – not just for Toyota.

All hybrids are suffering sales wilt because of the low cost of gas – the price of which has gone down and probably not temporarily – because of new discoveries, including here in the U.S. – which is now or soon will be the world’s number one exporter of oil.

Unless gas prices are artificially increased by punitive taxation.

The main “sell” for hybrids is their almost-zero emissions – but that’s less an issue for buyers than it is for car companies trying to appease the regulatory apparat. 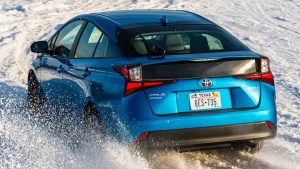 FWD rivals like the Ioniq and Niro are quicker – they can get to 60 in just over 9 seconds, which is snappy acceleration for this type of vehicle – but they might not get out of the driveway if there’s any snow on the ground.

The AWD Prius probably will. 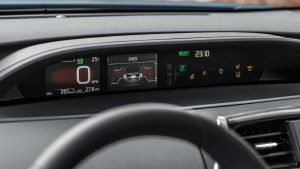 It would be even better in poor weather if it had a bit more ground clearance. The FWD Prius sits a very low 5.1 inches off the pavement – much lower than most cars and in the same ballpark as many high-performance sports cars.

The reason why is different.

Sports cars are low in order to get their weight as close to the ground as possible – in order to help them hug the road, especially in the curves. And to increase high-speed stability, by limiting the effect of lift – air getting under the car and trying to push it up and off the road.

In a hybrid, airflow management is all about drag reduction. The car sits low, so there is less of it. 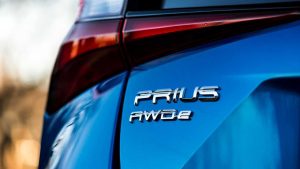 But low ground clearance mitigates the advantages of AWD when it snows. As the inches accumulate underneath the car, the wheels trying to move the car are less and less in touch with the ground.

If the vehicle rides up on the snow, it’s going to get stuck – AWD or not.

But more clearance when it’s not snowing increases aerodynamic drag – and that negatively affects mileage.

It would be be interesting to know what effect 6.5 inches or so of ground clearance (vs. the as-it-comes 5.3 inches) would have on this car’s mileage stats.

But, mileage is the thing here. And even though the AWD Prius isn’t a blizzardmobile, it will give you a leg up after that first plowing, when there’s still snow on the road – just not several inches deep. 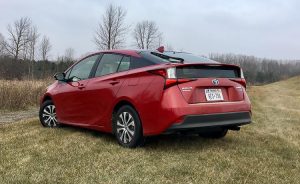 When Toyota redesigned the Prius – this was about a year ago – the object seems to have been to make it look less like a Prius.

The current Prius is definitely different. It looks angry about something.

Maybe the low cost of gas?

But it is less roomy – which makes it less practical than it used to be.

The previous-gen Prius had 36 inches of backseat legroom and 39.6 cubic feet of total cargo capacity – best in class.

The new-design Prius has 33.4 inches of backseat legroom and 27.4 cubic feet of cargo capacity, the latter lowered probably on account of the new car’s significantly lower roofline (58.1 inches vs. 58.7 previously).

Both are significant reductions.

Still, the Prius edges out the other availables like the  Hyundai Ioniq, which has 26.5 cubic feet of cargo capacity and doesn’t offer AWD. 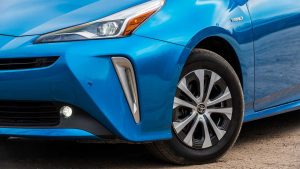 The Kia Niro – which is laid out like a small crossover SUV rather than a hatchback – has much more backseat legroom (37.4 inches) and much more cargo room (54.5 cubic feet) as well as much better acceleration – but its mileage is less without AWD: 51 city, 46 on the highway.

See that business up above about ground clearance and aerodynamic drag.

Inside the Prius, you’ll find the trademark centrally mounted instruments – which give the car a unique look and make it a lot easier for Toyota to sell the car in both lefthand drive and righthand drive markets.

No need for two different dashboards. 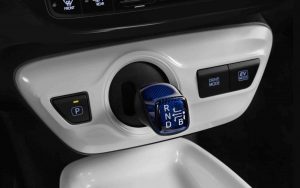 The Prius is available with the segment’s largest LCD touchscreen – 11.6 inches – through which you can control almost everything the car does. There is a learning curve, though – and some may prefer the more conventional standard layout, with the smaller touchscreen.

The familiar – to Prius people – toggle-style/dashboard-mounted gear selector is another uniqueness, with its pros and its cons. Its location on the dash makes more space available on the center console – a plus. But it has very little mechanical feedback, being a 100 percent electronic interface. 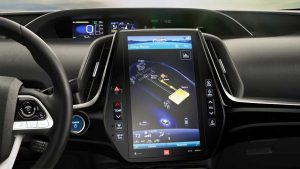 Be aware that the higher LE and XLE trims come with larger, 17-inch wheels and these will cost  you about 3-4 MPG vs. the base trim LE Eco, which comes with 15-inch wheels that have less rolling resistance.

These are also the better ticket for snow – because they’re not as wide.

Some may recall the Old VW Beetle. Though rear-wheel-drive, it excelled in the snow – in part because it had pie-cutter 15-inch wheels that cut though the snow – to the pavement underneath the snow.

You won’t be able to help being aware that you’re in Reverse. The Prius has an annoying and inexplicable beeper that comes on whenever you back the car up. Inexplicable – because this is a small car, not the Queen Mary or even an RV. 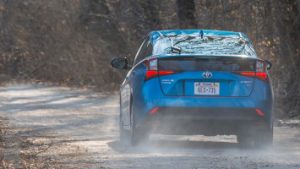 Besides which, the beep is inside the car.

One assumes the driver realizes he’s backing up.

The Prius may not getting going as quickly – but it can get going in conditions that keep other hybrids from going anywhere at all.