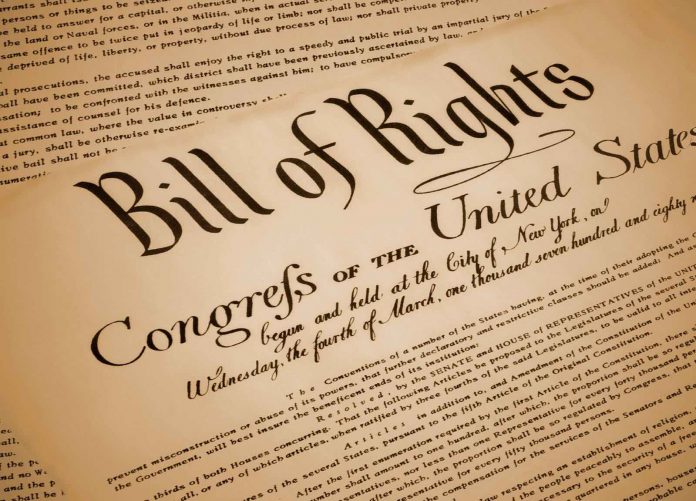 What are our “rights” – and where do they come from?

This is the question which answers all the others.

The Bill of Rights, it is said, grants our rights. This is a horrible and dangerous idea; one all too many Americans have been bamboozled into believing. Anything which is granted can also be taken away – which of course is just what’s happened and precisely why it was so important to convince Americans that their rights are granted  . . . in order to get them to accept their being taken away.

In fact, the Bill was written specifically as a statement of fact, intended to acknowledge our inviolable rights. To put a finer point on it, to make it very crystal clear that whatever was written in the Constitution in no way obviated our rights.

These rights existed prior the scribbling of the Bill – and will exist long after it is officially “just a goddamn piece of paper.”

It is worth recounting that the Bill of Rights barely made it – was tacked on to the Constitution as a kind of sop to suspicious Virginians like George Mason. To get them to support the Constitution, or at least not oppose it too much.

Which they did, reluctantly – much to our regret.

The foundational problem goes back to before even the Declaration of 1776 – which reads gloriously but doesn’t really define the source and nature of the rights it talks about.

The concept of “rights” was never quite fleshed out – and the general understanding of them was – and still is – generally hazy. Which has led to “rights” becoming things granted rather than things which cannot rightfully be taken away.

Even at the time of the Declaration, most people had not yet formulated the question: Do each of us, by dint of the fact that we exist, have absolute sovereignty over ourselves – or not?

If we do, then it follows that no state or government has sovereignty over ourselves; that no law may be passed which infringes in the slightest way on our absolute right to do as we please with ourselves, nor take from us anything which is the result of the labor of ourselves (including the labor of our minds).

In other words, the right to liberty and property  – a far more precise elucidation than “happiness” – follows from our rightful ownership of ourselves.

Our individual and indivisible sovereignty.

Each of us co-equals in that respect only.

To violate liberty or property is to assert ownership over the self of another – and that is the very definition of slavery. The degree of slavery is as irrelevant as the degree to which a woman is pregnant.

She either is – or she is not.

If it is accepted that our self-ownership is partial to even the slightest degree – that others may rightfully assert ownership over us, to whatever degree – then the principle of slavery has been accepted and it is inevitable that, in time, it will increase in degree.

Which of course is just what’s happened.

If it is accepted that others may lawfully take even a single cent from the person who rightfully owns it, then what is to prevent them from taking a dollar?

If is accepted that others may forcibly compel another person to do as they prefer with his property, then it is no longer his property. He has become a tenant.

If it is accepted that others may interpose themselves – and their laws – between a man and those with whom he’d like to transact business and otherwise associate with (or not) according to terms and conditions mutually agreeable to the parties involved – then that man has become their servant.

One who cannot quit.

If a man is subject to being punished (i.e., held accountable) not for harms he has caused but for actions which others have decided they find unacceptable – or which they assert might cause harm – then that man is no longer free.

He is the temporary beneficiary of conditional privileges granted by others. Privileges which may be limited at their discretion and rescinded at their whim. There is a word for such a condition:

To believe it is possible to limit slavery  – which is a more accurate way to describe what is meant by the concept of “limited government” – is an idea as silly a notion as believing that pregnancy can be limited, once conception has occurred.

The “baby” will be born.

It is merely a question of when.