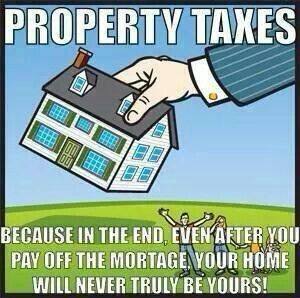 A reader questioned my objection to property taxes; here’s my response:

Jason asks: I understand what you say about property taxes being a rent to the real owner of “your” property because I pay several million dollars a year in property taxes. However, a fair presentation requires a mention that we typically get some benefits that increase the value of our real estate. Occasionally, the benefits are great enough that the property taxes are a bargain.

My reply: No denying that – but it’s beside the point. To make that point, consider that a kid who is bullied in school may learn toughness and become a stronger, more resilient man as a result.

It ended well –  but that doesn’t make bullying desirable.

The ends do not justify the means – especially when the ends differ.

Some people buy homes to live in; others as investments. Some both. Regardless, people’s wants and needs vary. Each to his own – or so it should be, without one person’s needs or wants imposing obligations on others.

I am someone who bought a home with the idea of eliminating a major recurring expense from my life – i.e., a mortgage payment or rent – in order to reduce the financial pressure on me and thereby give me freedom to do as I wish, especially with regard to my time. Which is of infinitely more value to me than down-the-road appreciation in the value of my property.

However, because some people believe it is a “public good” to impose perpetual taxes upon  everyone’s real estate in order to finance government schools  – the main justification given in my area for these taxes –  I am compelled to pay what amounts to rent in perpetuity on a home and land I paid for more than 15 years ago.

To put it more directly: I am forced to hand over several thousand dollars every year to finance the government schooling (among other things) of other people’s children.

I have never understood how it is that “A” assumes an obligation enforceable at gunpoint to pay out arbitrary sums of money for the government schooling of the children of “B” and “C,” whom he had nothing to do with bringing into the world. Children being created by a voluntary act (usually) performed by two consenting parties; the moral obligation to care for/school these kids rests upon the shoulders of those who propagated them, does it not?

Some will, of course, immediately accuse me of misanthropy – and of  “hating kids.” Far from it. I very much like kids, at least. What I hate is being yoked to pull someone else’s plow.

For “the children”- or for any other reason.

Empathy for others – the desire to freely help those in need – is stifled by the bureaucratized, euphemized, legalized predation which our society now engages in.

People come to regard one another as threats – which they are. People who would ordinarily never think of snatching even $1 from a neighbor’s wallet will readily press a lever behind the curtain in a voting booth to take thousands from the very same neighbor, the act of theft performed by proxies on their behalf, which enables them to think they aren’t thieves.

Which is an immensely dangerous act of cognitive dissonance.

Almost 100 years ago, H.L. Mencken described elections as a kind of advance auction of stolen goods. This is inarguable. And once the principle of it is accepted, inevitably, the stealing  of goods waxes as people become numbed to the fact that it is theft, no matter the “good works” toward which the loot is directed.

This is why there is almost no principled objection to theft as such. The debate – as per your question – is always utilitarian in nature; i.e., what the theft will accomplish.

Which is necessarily subjective in nature.

It is what some people want – and will use force to compel others to provide.

Viz: Taxes on property – to fund “better schools” – will improve the area and by dint of that, the value of property; therefore, these taxes are a boon to the community.

It’s a collectivist argument that presumes everyone considers “better schools” and “improving the area” are not merely desirable but should be funded – including by people who do not consider them desirable or prefer not to fund them – though this latter is almost never admitted to openly, for the same reason that me openly filching a $20 from my neighbor’s wallet to pay for a bag of cat food I regard as being of great value to me (and my cats) would never be countenanced.

But it’ s ok if I get this anonymized collective gang of filchers – “the government” – to steal the $20 from my neighbor, take $5  of it to pay their salaries and then redistribute the remaining $15 to me and my cats.

They not only institutionalize theft, they coarsen our moral sense to the act – which thereby makes theft in general less objectionable. If it is ok to steal for this reason, then why not for that reason?

Liberals and conservatives argue over that – almost never over whether taxation as such is immoral because it is theft.

And so theft is institutionalized – a thing much worse than mere theft.

A man is held up at gunpoint and relieved of his wallet. He is the victim of a single act of theft. The mugger does not send him a statement each year which tells him how much he “owes.”

Institutionalized theft works by this method – and by doing so transcends mere theft and becomes slavery.

Who is a slave? He is someone who us owned by another. Taxation asserts ownership over the taxpayer. He is obliged by law to give over a portion of what he earns and then to pay out money for the privilege of being permitted to keep what he has purchased.

He does not own himself if – by using himself – others may lay claim to the result. If he may never own more than the clothes on his back without encumbrance in perpetuity.

A man works; other men claim he “owes” them a sum of money by dint of the fact that he earned it.

If he refuses to give it over, he is regarded as having defrauded these people who claim to own a portion of his work product.

His property is never truly his because he is required by law to pay over sums of money to the government in order to be permitted to retain conditional use of it.

Such a man is a slave, if the term has any meaning.

This can readily be perceived by considering the not-slave. The free man. This a person who is not obligated to any other man, unless an obligation has been freely assumed (e.g., “A” agrees to sell “B” a piece of  property for such-and-such amount of money; once the sum agreed to has been paid in full, the obligation ends and “B” is the new owner of the property).

He is not obligated because others obligate him, contrary to his will.

A free man owns himself completely – from toenail to cow lick. If he does not, then someone else owns owns a piece of him and he is therefore, by definition, the slave of tht someone else.

A man who owns himself owns everything he produces, however much or little – and that no one else has a right to claim the smallest portion of it, much less to seize it force.

It does not change the moral equation if – by good fortune – he obtains a peripheral benefit, such as an increase in the value of his property (on which he will be taxed even more, it bears mentioning).

And unlike the bullied child in my example at the beginning of this essay, the taxed man is never free of the tax bully. He cannot move away to get away from him. The tax bully hounds him for life, denies him the security of ownership – not merely of his property but of himself.

No matter how hard he works, nor how much he earns, he will always “owe.”

Instead of a known Massa he might escape, he is chained to uncountable, unknowable and inescapable Massas – his fellow men – who have accepted the doctrine that slavery is ok if the slave is allowed a degree of autonomy; that theft is ok if it is called by some other name.

The tragedy, of course, is that these Massas are also slaves. Each having a competing claim on the other that denies any of them the security and liberty which free men have a natural and absolute right to, but which they’ve been tricked into surrendering for the sake of some perceived gain, exacted by force from one of their fellows.

The Few, the Proud, the Disarmed!