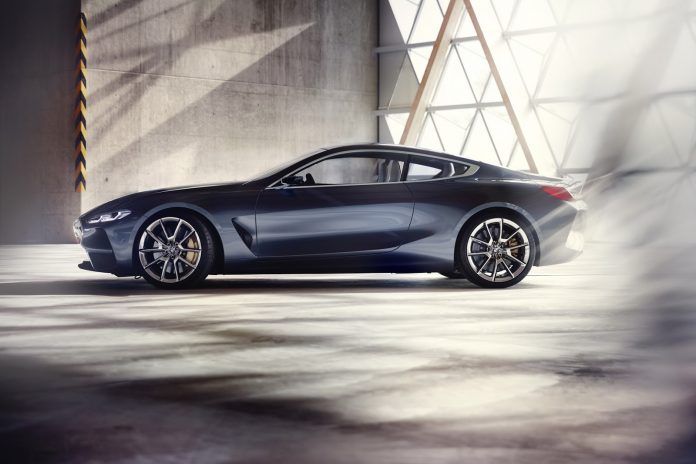 Ultra high-end cars are easier to buy – assuming you can afford one – because there are fewer choices at this altitude.

The BMW 8 Series coupe/convertible, for instance.

It pretty much has the ledge all to itself.

The availability of hard or soft-top – and standard back seats – sets it apart from other high-end two-doors that are generally similar – such as the Mercedes SL – but which don’t have four seats and come only as convertibles. 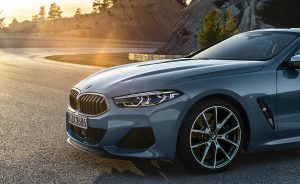 Naturally, there’s one more thing which sets the 8 Series apart . . .

But as Ferris Bueller said: If you have the means, I highly recommend picking one up. 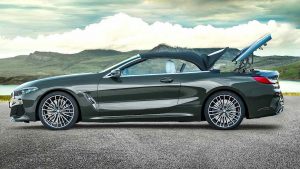 The convertible version of the 8 Series coupe is new for 2019.

You can raise – or lower – the top in about 15 seconds at speeds up to 30 MPH. An integrated pop-up rollbar is part of the package, as are BMW “M” (for Motorsports, BMW’s performance division) trim, including backlit doors sills and aluminum pedals.

Neck warmers – for those chilly top-down days – are available optionally.

Take more friends along for the ride. 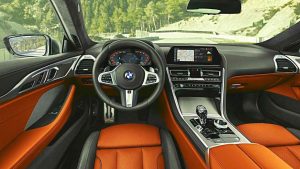 You can pick your top – hard or soft – but both versions of the 8 Series come standard with the same drivetrain. 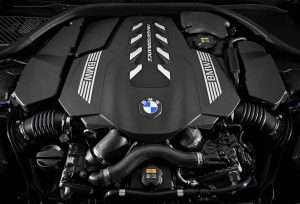 It connects to the road via an eight-speed automatic with driver-selectable modes and a standard performance-calibrated all-wheel-drive system that has the ability to route all the engine’s power to the rear wheels when the driver doesn’t want any of that prodigious power going to the front wheels.

Zero to 60 is achieved in an asphalt-rippling 3.8 seconds.

Also standard is an “active” exhaust system that lets the V8 rip audibly through the trapezoidal tips. Under load, baffles open and the exhaust note picks up in tune with your speed. 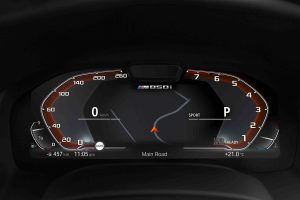 Handling, meanwhile, is enhanced by a rear-wheel-steering system – another feature unique to the Eight.

There’s also a new feature called “Intelligent Networking” that anticipates the need to downshift because it knows ahead of time that you’re coming up on a stop sign or intersection (via GPS). It can also modulate shift timing for  faster pace through curves you haven’t driven through yet – but which the car knows are just up ahead.

It’s worth a mention here that that BMW’s standard V8 Sasquatch stomps not only the standard 362 hp V6 that comes standard in the Benz SL but also its optional 4.7 liter V8, which summons just 449 hp for $113,550 – which costs more than the 850i coupe. 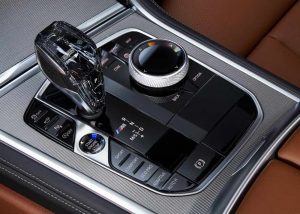 And still no AWD.

There isn’t much else, either.

There’s the Porsche 911 – which isn’t slumming – and you can get it as a hardtop or a convertible, and with an AWD system, too. But no V8 – and while it has back seats, they’re as ridiculous as a politician’s promises.

As formidable a supercar as the 911 is, it’s not a Grand Touring supercar.

It’s also a much smaller car, with a much smaller – some might say nonexistent – trunk (4.4 cubic feet). The car is balls-to-the-wall fun for you and a friend or SO to take up and down the canyon.

But if you want to take two more friends – or more than what you can carry in your pockets – you’ll need to make that trip twice. 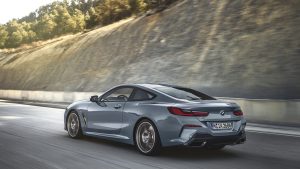 What does it feel like to be King of the Road? Take the 8 out for a drive and see for yourself.

And take three friends along.

The ability to carry more than one passenger – and more stuff, if you’re not carrying passengers in the back seat – makes the Eight a rare bird.

Its performance makes it a formidable one.

Both turbos have electrically controlled wastegates, to more precisely regulate the boost. And the turbos develop that boost without the usual need to draw a deep breath first. Like the famous Wall of Sound pioneered by Phil Spector back in the ’60s, you will experience a wave of power. 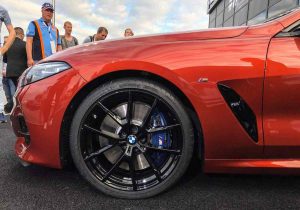 BMW has deliberately not tamped down the turbo’s whistle – or pop. In addition the electrically controlled wastegates, there are electric blowoff valves, there to “enhance” the music made by this creature of the night (and day).

Turbocharging smaller engines to maintain the output of a larger engine retired for reasons of fuel economy fatwa-compliance may have been an engineering expedient, but – hilariously – these smaller-but-boosted engines make more power (and sooner) than the bigger engines Uncle’s fatwas were designed to eliminate via regulation. Ha! 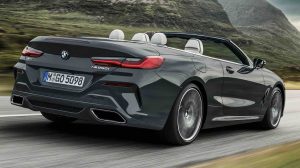 Be grateful that engineers are smarter than bureaucrats.

But this is a car you sometimes won’t want to drive fast. Remember: It is grand touring car as much as it is a supercar.

With the top down and neck heaters turned up, you may just want to enjoy the moment – for as long as possible.

And if you are in a hurry, this car will get you there. 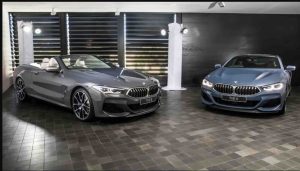 The AWD system gives you the best of both worlds. With as much power on tap as the BMW’s V8 makes, it makes sense to distribute it via four rather than just two wheels – if you want to do more than spin wheels. But, traction isn’t everything – unless it’s a race for money – and this is a street car.

It is fun to skitter a little – and in this car, you can.

You can also move out in the wet – which is something you can’t do in powerful RWD-only cars like the SL, whose power becomes a liability when traction is limited. A $30,000 car with AWD can outrun a $100k RWD car when it’s slick.

There are other practical pluses, too. The Eight – like all current BMW cars – doesn’t enclose you. You can roll down the window and lean your elbow on the door top without risking a rotator cuff injury. 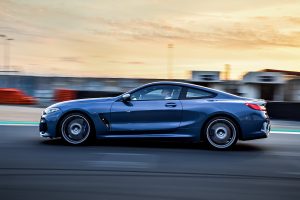 And most of all, you can see.

As modern as this car is, it also has a welcome old vibe in this respect. So many new cars have doors that seem to come up to the roof and glass so abbreviated it can feel like you’re in a Medieval castle looking out of a keyhole slit rather than seeing the world around you.

The tested convertible is airy with the top down – as you’d expect – but almost magically insulated from the air, which slipstreams around the passengers. I was able to test out the optional neck heat system – which blows warm through the headrests – because  I got the car in early spring, with the weather still chilly at night. 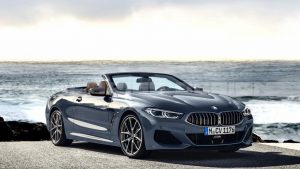 Not having to stop to lower the top – or raise it  – is another boon.

As anyone who has ever been caught in a sudden downpour knows, stopping – whether in a convertible or on a motorcycle – means getting wet. If you can keep moving, you’ll stay drier because the airflow shunts most of the rain over you. This is especially important in a $121k convertible with Merino leather seats. You may not like getting wet; you shouldn’t let the interior of a car like this get wet. 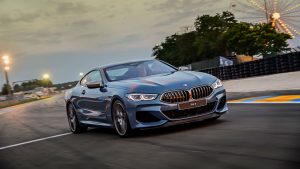 As low as the coupe is, the convertible is even lower – at least, when the top is down.

Inside, the 8 touts the latest tech – including a standard holographic Heads Up Display and available infra-red night vision, which helps you “see” animals (or kids) in the road via the warmth of their bodies relative to their surroundings. 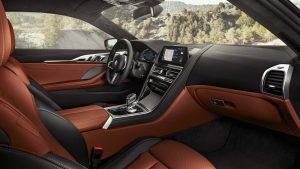 The main gauge cluster is a hi-resolution/driver-configurable 12.3 inch LCD display with a secondary 10.25 inch display for the audio system, climate control and secondary apps – which can be accessed via both voice and gesture (just twirl your finger  – or point at what you want) as well as by touch/swipe.

It’s generally similar to the layout in other new BMWs – including the new 3 Series sedan – – and is the one area where this car isn’t the Randian uber individualist it otherwise is. Arguably, BMW should have given this car its own unique instrument cluster. Some may also not like the oddly asymmetric shape of the tach and speedometer, which both follow bent lines rather than the usual curves or ovals.

But what sets this one apart from all the others is what’s behind the driver – those extra seats. It’s why the Eight is about a foot longer – and so much more practical – than the Benz SL. 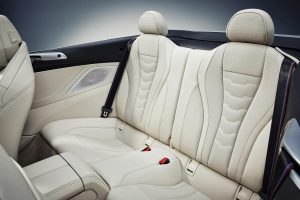 And not not just because it can carry two more passengers.

BMW cleverly arranged it so that the upper portions of those back seats can be folded forward – either individually or together – when you aren’t carrying more than one passenger, creating a startlingly large pass-through (for a sexy coupe like this) to the trunk – which is already 12.4 cubic feet with the seats in their normal use position.

With the pass-through in use, you can fit more things in the Eight than the SL can handle –  even though the Benz has a slightly larger (13.5 cubic foot) trunk – because the Benz hasn’t got the huge pass-through tunnel that the BMW does.

And forget the 911 – with its comical 4.4 cubic foot trunk. It’s more a rear-mounted glovebox. Some cars have more space in theirs. 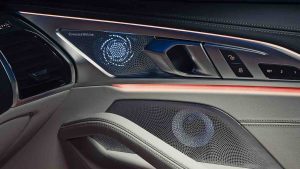 Both hard and soft-top versions of the Eight come standard with 20 GB of built-in multimedia storage and updatable software designed to keep the tech the car comes with current for years after you buy the car.

You can pick from two high-end audio systems – either Harman Kardon or Bowers & Wilkens, the latter with 1,375 watts, 12-channel amp and 12 LED backlit speakers.

It’s another example of choices you aren’t offered elsewhere.

A Carbon Package can be added if you like. To put the equivalent of stiletto heels on this already knock-out ride. It includes carbon fiber diffuser inserts, mirror caps and air intake bars.

One of the very few things the 8 doesn’t come standard with is an impressive top speed. BMW electronically limits the Eight to 155 MPH – which is very fast and also very illegal in the United States – but also not much faster than many ordinary cars are capable of reaching, at least theoretically. 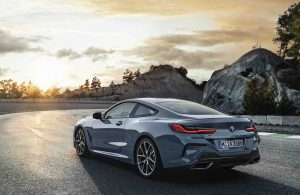 A new Toyota Camry, for example, is capable of more than 140 MPH – if you dared to drive it that fast.

Not that you would – but the car could.

Adam Ant once said there’s always room at the top – and he was right.

Especially if you’re the only one there.