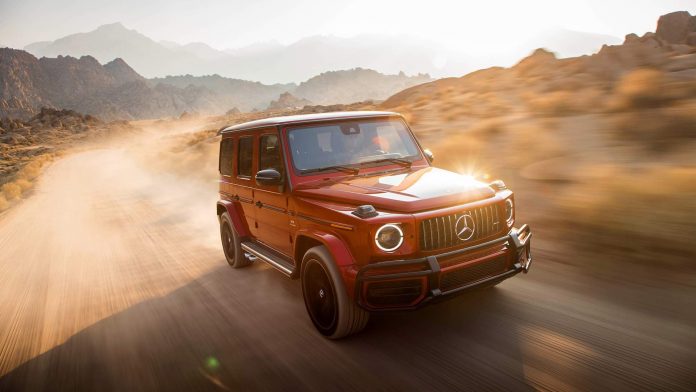 A Corvette getting to 60 in 3.7 seconds is kind of meh at this point. A Mustang GT can almost do the same.

It’s just not that big of a deal anymore. Such speed has become common – and so unremarkable.

If you want remarkable, there’s the Benz G63.

It also gets to 60 in about 3.7 seconds. Well, okay, 3.9 seconds if you want to pick nits. But it does so carrying twice as much weight – almost – and nearly twice as high. 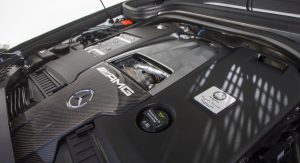 It is remarkable because it does what the Corvette does if the Corvette were standing on its hind legs and had another Corvette strapped to its back.

Plus, the G goes off-road with the tenacity of one of those lizards you see scrambling up sheer rock walls.

There is a downside, though.

You have to close the doors really hard. 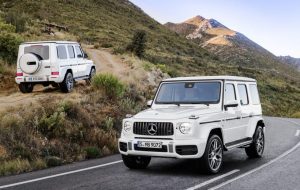 It may weigh almost 6,000 pounds – and have the aerodynamic slipperyness of of a double-wide – but it can keep up with a Corvette on paved roads. And leaves it far behind when the pavement ends.

Or the snow starts.

It has three locking differentials (center, front and rear) an adjustable suspension and nearly ten inches of ground clearance. 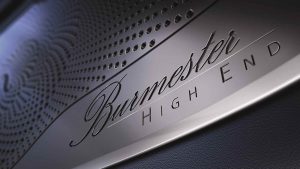 Base price is $147,500. Which is actually a deal when you consider you’re getting three top-of-the-line Benzes for your money.

And distinctiveness unavailable elsewhere at any price. 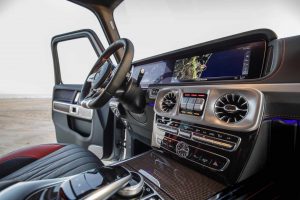 The 2019 G-wagen is heavily updated from the wheels up.

The most noticeable changes, though, are inside – which is completely revamped and now in sync with the look, feel and comfort of Mercedes’ top-of-the-line luxury sedans.

There have been major changes under the hood, too.

The G63’s V8 powerplant loses a liter of physical displacement but gains 14 horsepower – and  66 ft.-lbs. of torque. There is also a new nine-speed automatic transmission and a completely revised suspension that much improves this SUV’s on-road manners without diluting its off-road capabilities. 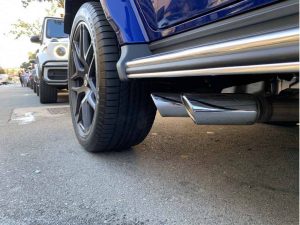 Revised interior is no longer as rugged.

Beautiful V8 is hidden under covers.

You need to remember to slam the doors. Every time.

AOC just put your name on her Enemies List. 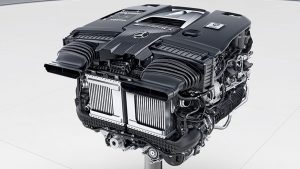 Instead, the apotheosis of internal combustion – in the form of a “bi-turbo” (that’s two of them) hand-built  – and hand-signed by the builder – 4.4 liter V8 that achieves Ludicrous Speed without the wait before – or after.

There’s no plugging in.

Just fill ‘er up with 26.4 gallons of premium unleaded. Which will take you almost 400 miles on the highway – even with the AC (or heater) on. And without a 30-45 minute best-case wait to recover a partial charge. 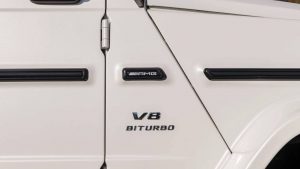 It’ll also take you to 60 in 3.9 seconds – and through the quarter mile in the mid 12s. These are startling numbers given the G’s asphalt-dimpling 5,783 lbs. of curb weight (a Corvette weighs 3,298 lbs.) and the wind resistance which the V8 must overcome to get this almost 7 foot tall box moving that quickly. 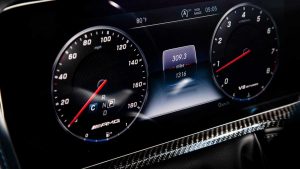 Three explanations for this:

One, the 4.4 V8 is capable of better mileage because it’s usually smaller. The turbo boost makes it bigger – but only on demand. If you don’t demand it, the engine remains smaller and demands less fuel. Drive with a light foot and you can coax 18 or so MPG out of the G – though it runs counter to the object of this exercise.

Why buy a ribeye and not eat it? 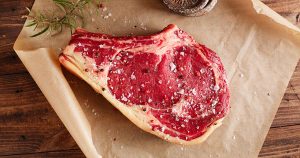 Two, the new nine-speed transmission, which adds two more overdrive gears vs. the previously used seven-speed transmission. These give the V8 extra leverage; it takes less energy to maintain speed once achieved. Even with the aerodynamic profile of a double-wide, the G’s engine doesn’t need to spin faster than about 2,000 RPM to hold 70 or so on a level road.

Mercedes has reduced the curb weight of this stomper by about 150 pounds – which may not seem like much in this context, but it is the equivalent – roughly – of one less passenger.

Put another way, the old G was heavier empty than the new G is with a driver on board. 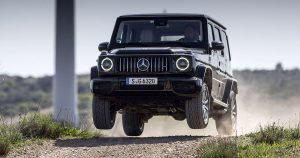 There are many ways to have fun in the G but perhaps the best way is to take someone for a ride who has no clue what the G is – and observe their reaction when you show them what the G can do.

Battleships don’t fly, after all.

Of course, they might notice the sidepipes – two on each side – and wonder what’s up with that. Soon, they’ll know. Select Sport+ using the toggle switch on the center console. This opens up the sidepipes – you’ll immediately hear the change in pitch – and dials up the most aggressive transmission shift points (including rev-matching downshifts) throttle response and, of course, boost. 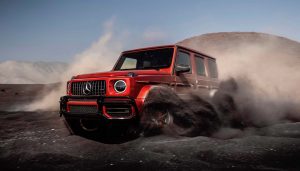 Getting a 6,000 lb. box to 60 in under 4 seconds never fail to entertain. Especially when you do it next to a Corvette.

Better yet, a Tesla.

Even if he’s a little bit quicker, he’ll be stopping much sooner – and waiting a lot longer. No matter how much gas the G burns up, it can be replenished in 5 minutes pretty much anywhere – as opposed to waiting 30-45 minutes, assuming you can find a “fast” charger.

If not, you’ll be waiting overnight.

And the G isn’t sidelined by snow. Or mud. Or a foot of water, which it can ford. 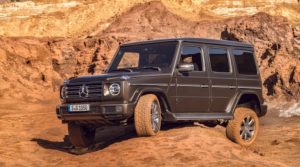 Also entertaining is the G’s handling. It isn’t quite Corvette, but it is remarkably grippy given how tipsy you might expect it to be. Especially given the increased ground clearance (9.5 inches now vs. 7.7 last year).

A person who knows how to drive can outdrive someone who doesn’t even if they are driving a Corvette. Observe the unhappy expression on his face as he looks in his rearview – and sees your brush guards.

And anything less than a Corvette is easy meat for the G. Because even if a Miata or something like that can carry more speed into a curve, when the G comes out of the curve, it catches up. 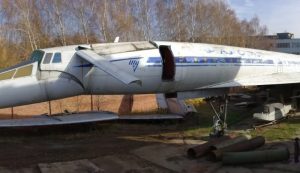 It is a good thing this thing is 4WD. If it weren’t, it’d wheelie.

But speed without luxury can be wearying. Ask anyone who flew Concordski – the Russian competitor of the Concorde. Mach 2-plus . . . and aware of every minute of it. You got there fast – and wish you’d gotten there sooner.

Same for the old G. It wasn’t made by Russians but it was a rough beast, like Concordski.

The new G is like the Concorde. All the speed – none of the misery. First class, top-drawer everything. Easy to steer; easy on your kidneys. It’s not even loud – when you’re not in Sport+ plus mode (select Comfort) and the exhaust baffles close and the pitch notches down to a pleasant background rumble. 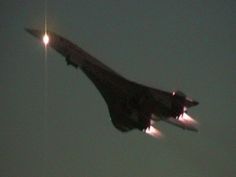 Just one crude thing about the G.

If you’re not coming out of a ’69 Bronco – if you’re used to modern cars – you’ll be amused by the retro thumb-push manual exterior door pulls. And you’ll have to get used to slamming them closed, which is extremely unusual in a six-figure anything. Most of which have “soft” close mechanisms that cinch the doors closed for you so long as you get them physically in touch with the striker plate. 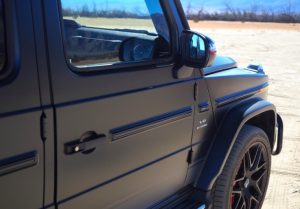 Anything less than a manly heave and they won’t fully close – the G letting you know via a warning indicator in the main gauge cluster. You get used to this, though. And it becomes part of the charm.

Limp-wristed people are not G people. It keeps the wrong sort away. 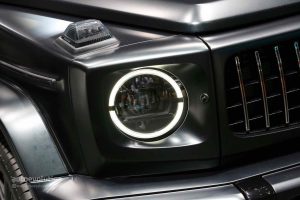 Once you’ve closed those doors – make sure! – you find yourself inside a thoroughly modern Mercedes.

The old G’s entire dashboard has been deep-sixed in favor of a flat-panel LCD display essentially identical to the one inside a new S-Class, with a driver-configurable main cluster (select from Sport, Comfort and Progressive themes) and a large secondary display for everything else – including the driver/passenger seat massagers and pneumatic side bolsters that inflate in accordance with cornering forces. 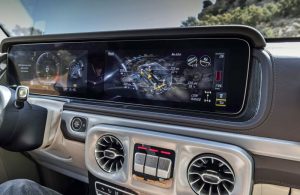 The seats are comfortable even with the massage feature off – which the seats were not in the previous generation G. Especially the rear seats – which were insufferable. They were too narrow, too tall and firm in the way of wooden church pews. This was due to the old G’s military vehicle antecedents.

Seats were there – and not much more.

Now the only thing missing is massagers for the rear seats. Legroom – 40.5 inches – is exceptional and nearly as much as up front (41.9 inches). Headroom in both rows will accommodate seven footers. 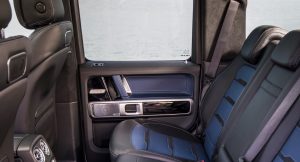 Extra-thick glass (it almost looks armored) and probably several hundred pounds of sound deadening underlay underneath the ultra-plush carpeting and piped and stitched AMG floormats tune out the world outside, so you can tune in the Burmester surround-sound ultra-premium audio system – which allows zero distortion to detract from Tannhauser at full volume.

The headlights look old-school round/sealed beam but house the latest LED high-output lighting technology, including auto-leveling. Open the doors at night and the Benz three-pointed star is projected onto the surface of your driveway. At the same time, the programmable LED interior backlighting glows to life. 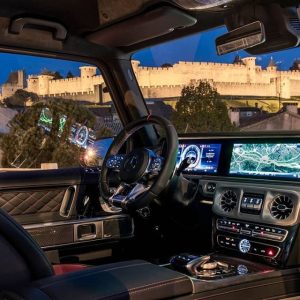 It’s beauty – and the beast.

With one exception. The beautiful hand-built AMG engine is buried underneath plastic covers – carbon fiber, if you upgrade. This is like making Charlize Theron wear a rain barrel.

This is no ordinary vehicle.

People who buy a G63 know what they are buying – and want to see it. They probably also want to show it. FiatChrysler understands this – and does a top-shelf job uncovering the 707 horsepower V8 in the Challenger and Charger Hellcat. Those engines are also hand-assembled and signed. But you also get to see the engine – painted  historically righteous Hemi orange.

The G’s V8 is every bit as exceptional – and deserves to be more visible. 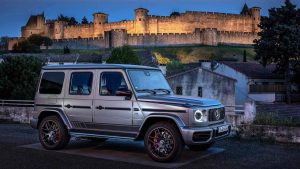 Because the G isn’t a Corvette, the top speed is electronically limited to 149 MPH – probably a good thing given the speeds the thing is mechanically capable of. While battleships don’t fly, the G just might – if not for the electronic failsafe. Probably, this can be defeated, but do it at your own risk.

If speed is not your main need, you can get the G-Wagen in the same basic configuration – but without the AMG upgrades – for $124,500. It’s still packing the 4.4 liter V8, just not hand-built and making a more modest 416 horsepower. 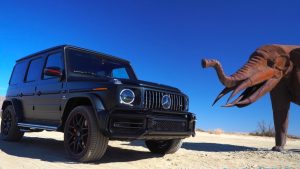 It’s a measure of just how spectacular the G63 is that 416 horsepower sounds kind of meh when you say it.

You don’t have to be religious to believe in meerakuhls. Nor put your hand on the television set.

Just visit your local Benz store and take a G63 out for a tear.

You will be healed.