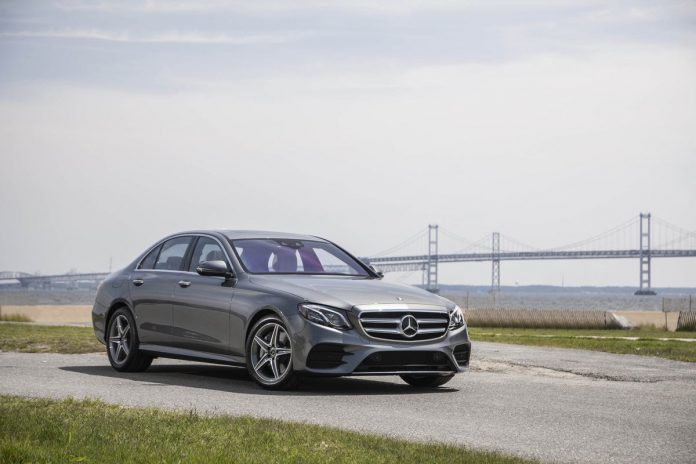 Given that almost every car – including $25,000 cars – either has or offers climate control AC, seat heaters and an LCD touchscreen, is there any sound reason to spend $53,000 on a car?

The first is where the power goes – which is to the rear wheels. One of the objective functional differences between a perfectly nice but perfectly run-of-the-mill car and a car like the Benz E-Class is precisely this. 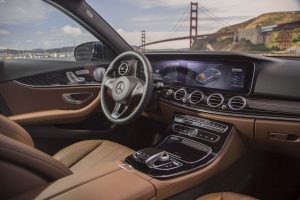 Why does it matter which way the power goes?

It’s more a matter of where the weight is.

Front-drive cars are heavy in the nose, because almost all of the weight of the drivetrain is pressing down on the front wheels. Most new cars are made this way and it has its upsides. For one, it’s great for traction in the wet and snow. But it detracts from balance in the curves.

Rear-drive cars handle, ride and just feel better – and that’s part of what you’re paying for.

Then there are the amenities.

Not merely climate control AC, heated leather seats and a very good stereo. You can find those amenities in any Camry/Accord/Mazda6, et al. 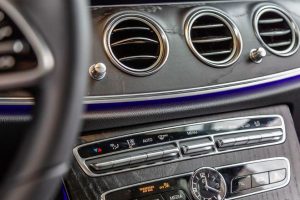 What you won’t find in any of them are massaging seats that slide you out of the way of a T-bone impact. Or heated armrests and center console. Nor the ability to self-park without you behind the wheel. There is also a spectacular 23 speaker Burmester ultra-premium audio rig with A-pillar mounted tweeters that corkscrew out of their hiding place as the concert experience begins.

Almost any new car is a perfectly nice car that will get you from A to B comfortably. 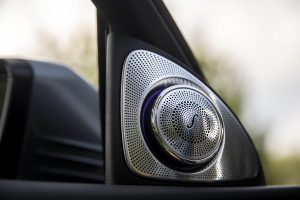 But a car like the Benz E will transport you.

It comes as either a Luxury or a Sport sedan – the Luxury having a more traditionally Benz front clip with the three-pointed star mounted as a hood ornament while the Sport gets a different grill, with the Benz badge integrated with the grill. 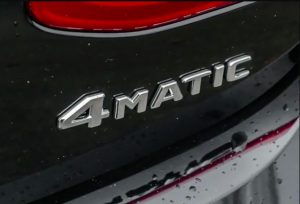 Any of these can be ordered with AMG (Mercedes’ performance division) trim. And for the AMG experience, there’s the AMG E53, which gets an uprated version (429 horsepower) of the twin-turbo V6. 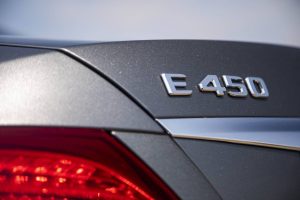 The E450 and AMG E53 variants are new additions to the lineup; all trims get a new-design steering wheel.

Individually tailored versions – each priced the same, or nearly so.

Absent 12V power point – if you opt for the extra USB port.

V6 and AMG versions are AWD-only. 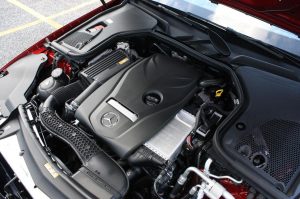 Ten years ago, you’d never have found a 2.0 liter engine under the hood of a two-ton car like the E (technically, it’s not quite two tons – at least not the base E300 in rear drive form, which weighs 3,792 lbs. empty).

Because it was too little engine for too much car.

But along came Uncle and his fuel economy (and lately, carbon dioxide “emissions”) fatwas. These affect everyone – from Hyundai to Mercedes, and regardless of their respective customers’ needs and wants. 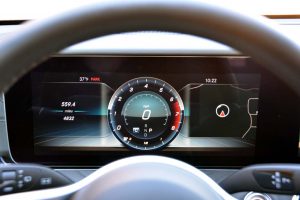 It’s not as bad for Hyundai and others who make perfectly nice but perfectly run-of-the-mill cars. But people who spend $53k-plus for a car expect something more.

Which is just what they get – just not in the form of displacement.

The E’s standard 2.0 liter four makes 241 horsepower, which on a power-per-liter basis is damned impressive. If this little engine were a big V8 of 6 liters’ displacement, it would be making 723 horsepower.

Small engines have never been so big – in terms of their output. 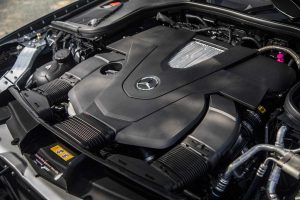 Which is the result of a different kind of pressure. Of compression of the airflow.

Turbochargers have made it feasible to comply with the noxious fatwas and maintain the power – and performance –  formerly provide by much larger, fatwa-noncomplaint V6 and V8 engines.

There’s a torque benefit, too.

These turbo’d gas engines are coming very close to diesel torque numbers. And perhaps more relevant, immediacy of torque delivery. The E’s 2.0 engine whelps out 273 ft.-lbs. – comparable to the torque made by a V6 – and it peaks at 1,300 RPM. 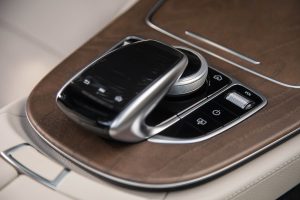 Which is why this big sedan with such a little engine is capable of getting to 60 in about six seconds while also achieving 21 MPG in city driving and 30 on the highway. The highway number is especially impressive when you stop to consider that it’s only about 5 or so MPG below what would be considered pretty good for a mid-sized, Camry-ish family car that weighs 500 pounds less.

It makes 121 more horsepower than the 2.0 just-one-turbo four  – an increase of about 33 horsepower vs. last year – and gets the two ton-plus AWD-equipped E (4,134 lbs. empty) Benz to 60 in just over 5 seconds while delivering pretty much the same mileage as the smaller four: 20 city, 28 highway. 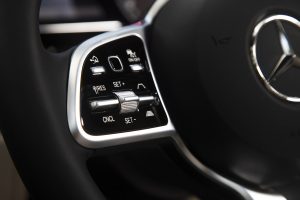 That’s like having two cakes, eating them both – and not getting fat.

Both engines paired with nine-speed automatic, which has three overdrive gears (7th, 8th and 9th) with the final overdrive ratio being .60 – which is part of the reason for the fatwa-friendly fuel economy numbers. The deep overdrive keeps the big Benz rolling with the engine barely running.

If you want even more – and something different – that’s just as efficient – check out the E53 AMG. It is powered by Mercedes’ new in-line 3.0 six, paired with a 48 volt mild-hybrid system. This one gets you to 60 in less than 5 seconds while beating the mileage numbers of the E450. 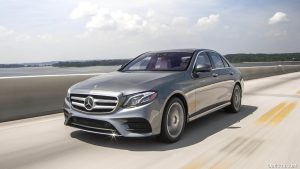 The first thing you notice is being able to see – a luxury in and of itself.

The E hasn’t got the outward visibility problems which are fairly common in new cars – ironically because of safety considerations. More accurately, because of regulatory compliance considerations. High door sills – and attendant poor visibility to either side – are a side effect of designing cars to pass federal crash tests, which measure how well a car protects occupants in the event of a crash.

But a car with poor visibility is arguably more likely to be in a crash.

Visibility is a major safety feature, even if it isn’t tested by the government. 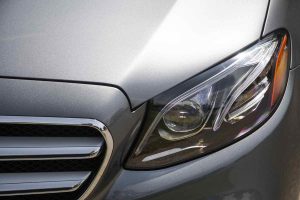 And there is plenty of it in the E – which manages to be “compliant” without the driver feeling as though he’s piloting a submarine, viewing the world through a periscope.

The door sills are low enough that you can rest your elbow on them with the windows rolled down. In many new cars, the door sills are so high – and the door glass so small – that it’s harder to see what might be coming toward you from the left or the right.

And forget leaning your elbow on the doorsill.

Forward and rear sightlines are also excellent, because the E’s A pillars are set forward enough in relation to the driver – and far enough apart in relation to each other – that the windshield functions like a massive picture window, giving a wide-open view of the road ahead. The rear glass, meanwhile, is not sloped so sharply that the view is distorted – and there is enough glass, again, to give you an excellent view of what’s behind you without having to rely on computer eyes/sensors to inform you. 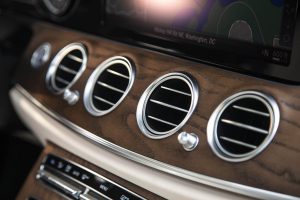 Roll the widows up and the quiet inside is almost solemn. As good as new cars are generally as far as keeping the noise of the outside world outside, the E is a noticeable cut above.

Power delivery from either of the E’s engines is almost electric- a smooth, continuous surge of motion – and almost without sound, even from the twin-turbo V6. These internal combustion engines deliver the EV upsides of silent smoothness and immediate torque without the EV hassles of worrying about plugging in and waiting while it charges.

Mercedes says the E the offers “sporty comfort”- as opposed to the usual “luxury sport” description. 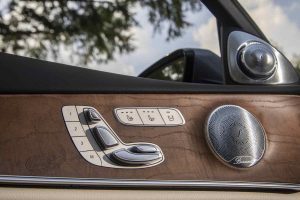 Actually, it’s both – or either.

You have your choice of Dynamic Select or Air Body Control suspension systems. The first allows individual tailoring of ride quality/firmness via four selectable programs (Eco, Comfort, Sport and Sport+) as well as an Individual fifth program that allows further adjustments on an a la carte basis.

The second – ABC – is a multi-chambered air suspension that automatically tailors the  E’s ride quality and suspension firmness to match your driving as you go and also auto-levels the car (to compensate for loads) and lowers it once under way, which improves both airflow and handling by lowering the center of gravity.

It’s called steering assist, but the fact is the car can steer itself without any assistance from you. You’re not supposed to take your hands off the wheel – and the system can tell if you have and will automatically disengage. But the technological truth is the car is capable of negotiating itself through turns.

Also parking itself – without you even in the thing.

The tech is embedded – just not activated – because of legal considerations that apply here but which are probably going to be changed to permit the tech to be activated.

In Europe – where the E hails from – it already is. 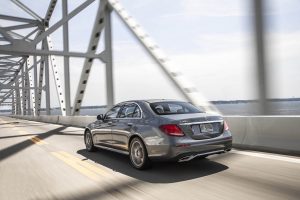 But it’s all beside the point, really.

Auto-drive tech makes sense if you’re stuck driving a perfectly nice car . . . with the character of the microwave in the office cafeteria.

But not an exceptional car.

You are paying that $53k-plus to feel something  – not to feel sleepy, or want to fiddle with your phone.

You get your money’s worth. 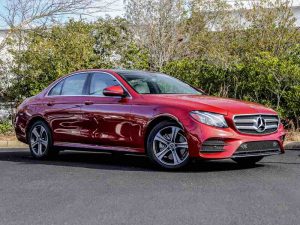 Whether Luxury or Sport, the E is an elegant car.

The Sport gets a racier – and bigger – Benz emblem as the centerpiece of a larger/racier-looking grille.

Both are available with a very elegant full-width LCD instrument panel which is actually two 12.3 displays side by side, the main display for the driver (which can be almost infinitely configured to suit) and the secondary display for the E’s also-almost-infinitely-configurable secondary systems, including the stupendous 23 speaker Burmester audio system, those heated armrests and center console, the seat massagers, scent dispenser – and so on. 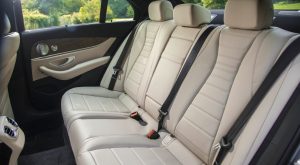 A practical touch is the E’s three-across bench rear seat. Many luxury-sport sedans have rear bucket seats, which makes it awkward for a third passenger to sit in between them.

Legroom back there is generous, too (36.5 inches).

The trunk is one of the few small things about the E. It’s just over 12 cubic feet, which is about the same as in perfectly nice mid-sized cars in the $25k class.

This is about the only thing the E has in common with those perfectly nice $25 cars.

One of the few missing things is a 12V power point up front. 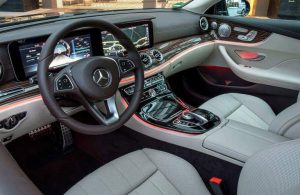 It’s arguable that no one does mood lighting better than Benz. Thin-line LED strips glow ethereally in colors ranging from aurora borealis purple to fiery red to calming deep blue – and 64 other colors, too.

Turn the Activating Massage on and cancel that appointment with your therapist.

In the end the E will probably cost you less, too.